BURBANK, Calif. - Even after the co-owner of Tinhorn Flats was arrested on Thursday night due to violating a court order, the Burbank restaurant said the show will go on and will continue to serve its patrons.

In a social media post on Friday, the restaurant posted a picture of Lucas Lepejian's mugshot, along with the caption: "We will not comply with zero science and zero sense rules and mandate," also saying the saloon will open at noon.

His arrest came after spending the last several months trying to stick it to the city of Burbank.

Lepejian's arrest came shortly after he told FOX 11 he reopened the restaurant after city crews tried boarding up the building to shut it down due to safety violations. Lepejian is charged with violating court order, the Burbank Police Department confirmed. 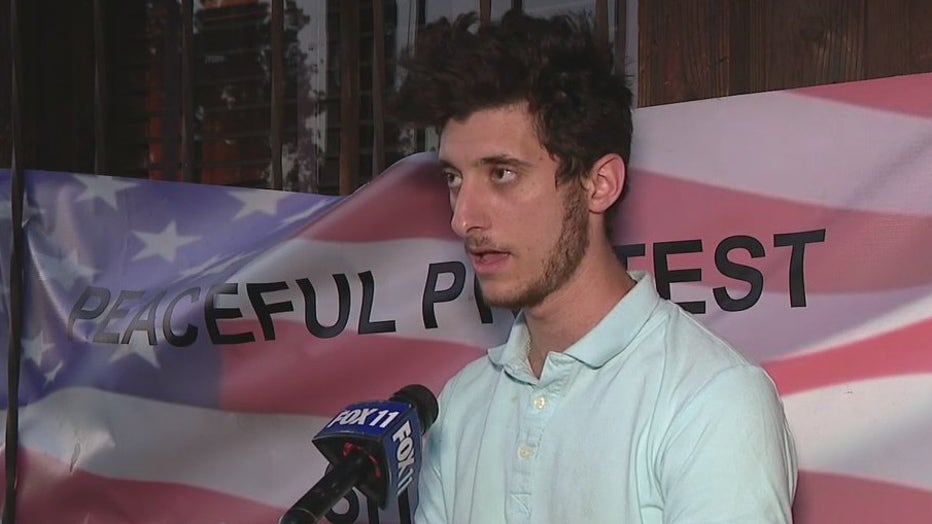 "The city locked up the restaurant with wooden planks so when I came by at 11 a.m., there were wooden planks up on all the doors including the door on the inside and the only way they were able to do that was jumping our fence so that's trespassing. As soon as I saw that, I came in and I sawed it right off," said Lepejian, prior to his arrest.

"There are multiple fire/life safety violations that have been brought to the business owner’s attention. These violations may create life safety hazards to any occupants in the structure," stated Eric Garcia, Burbank Fire Chief.

Lepejian said the restaurant is safe.

"The city's trying to make it very political. I just think every business is essential, a legitimate one that pays taxes, has employees and affects many other people too," he said.

He said the city should be helping businesses through relief payments. The restaurant is also facing tens of thousands of dollars in fines.

"We're looking at $40,000 to $50,000 now and it's just tyranny and communism that's occurring. Our overhead is quite high right now to maintain the place with all these generators that a lot of our guests let us borrow," he said.

He said he has received support from the community through his GoFundMe page and he is operating the business with generators.

"We have generators hooked up to the main panel and that allows me to turn on switches that we need such as lights and the hood for the kitchen and some televisions now. Every day I try to make advancements with the panel," he said.

The restaurant owners and the city of Burbank have been in a months-long dispute. The city has a civil suit in court against the restaurant. Just last week, a judge ruled he was leaving a temporary restraining order in effect pending another hearing scheduled for later this month while the city and restaurant resolve their months-long dispute. The next hearing is scheduled for Friday, April 9.

Officials say the restaurant and bar located on Magnolia Boulevard has repeatedly defied coronavirus health orders to close, including its refusal to stop offering outdoor dining when all in-person was banned in Los Angeles County.

"We're under attack by everyone. I was not able to make a living for myself and for my family, and I had no choice but to open up. This place would not be here right now. We would have to sell it and get rid of it. We would have gone out of business. This is why I was doing it so I won't go out of business," he said.

Lepejian said he will remain open despite the city's efforts to shut the business down.

"I will remain to stay open even if I am the only employee here. A lot of my employees are scared to work. I don't blame them. I totally understand the circumstances we've put them in but I will remain here until I can longer physically be here anymore," he said.

Prior to Lepejian's arrest, the city of Burbank had issued the following press release: