During commencement on May 29, 2021, the president of Wilberforce University announced to 2020 and 2021 graduates that their debt and other fines and fees owed to the university had been cleared.

NASHVILLE, Tenn. - A university in Tennessee announced this week that it will pay off the account balances of returning students in an effort to allow more time for studying "and less time worrying about finances."

Tennessee State University, a public historically Black university in Nashville, said Wednesday that it is forgiving the account balances of returning students who were enrolled in the spring of 2020, fall of 2020 and spring of 2021. It will also cover the summer of 2020 and 2021.

"We are keenly aware that the number one reason that students do not return to college is lack of funds," TSU President Glenda Glover said in a statement. "Paying off account balances for our students will relieve some of the financial stress that they have and allow them to focus on studying and completing their degrees."

The university said the debt is being covered by the federal CARES Act, which was passed by Congress at the onset of the pandemic in 2020. Earlier this year, additional funds were provided to educational institutions, school officials said.

In May of 2020, the university used also federal funding to assist students and support institutional needs due to the ongoing pandemic.

Grad student Kiaya Caine of Nashville said she’s grateful for the payoff, which will allow her to pursue her master’s in sports psychology.

"I actually wasn’t going to get my master’s, but now I’m grateful for the opportunity," Caine said in a news release. "This initiative is going to help a lot of students." 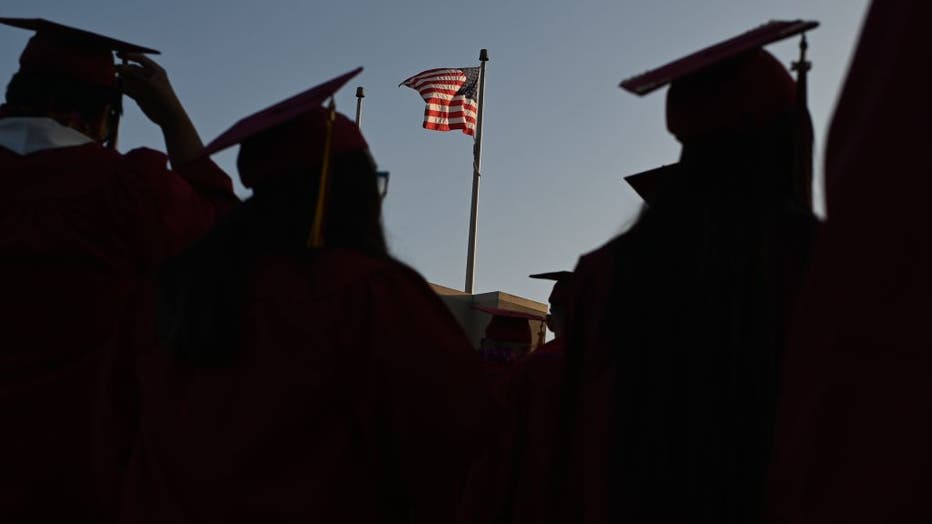 FILE - A U.S. flag flies above a building as students earning degrees participate in the graduation ceremony in a file image taken on June 14, 2019, in Pasadena, California. (Photo credit: ROBYN BECK/AFP via Getty Images)

TSU was founded in 1912. Its main campus is located near the Cumberland River about 10 minutes northwest of downtown Nashville.

Full-time tuition for in-state undergraduates begins at around $4,000 per semester, according to its website.

The university said it will resume full operations for fall 2021 and is also expecting its largest freshman class in five years. Freshmen are scheduled to move in starting Aug. 10.

Wilberforce University, the nation’s oldest private, historically Black university located in Ohio, also announced in June that 2020 and 2021 graduates’ debt and other fines and fees owed to the university had been cleared.