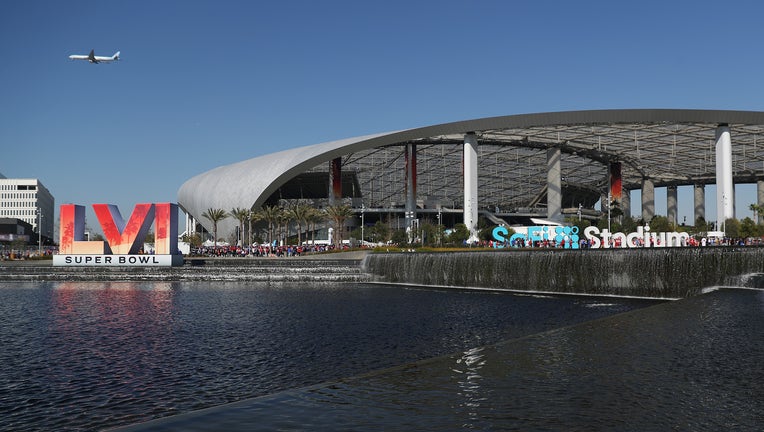 INGLEWOOD, CALIFORNIA - JANUARY 30: The logo for Super Bowl LVI is seen outside the stadium before the NFC Championship Game between the Los Angeles Rams and the San Francisco 49ers t SoFi Stadium on January 30, 2022 in Inglewood, California. (Photo

INGLEWOOD, Calif. - The NFL has announced pre-game entertainment for Super Bowl LVI at Sofi Stadium, including who will be singing the national anthem.

Mickey Guyton will perform the "Star-Spangled Banner" ahead of the game on Feb. 13. Guyton is a Grammy-nominated country artist from Texas. She's the first Black artist to earn a Grammy nomination for Best Country Album, for her album "Remember Her Name."

"I am shook, I am grateful, I am praise dancing," Guyton wrote on Twitter about the announcement.

The performance will be accompanied by an Air Force flyover of the stadium.

A local group will also get some love during the pregame festivities. The Los Angeles Philharmonic's Youth Orchestra Los Angeles will perform the Black national anthem "Lift Every Voice and Sing" along with gospel duo Mary Mary. "Before we cheer on the Rams in the Super Bowl, we’re excited to watch musicians from YOLA perform before the game," The LA Phil Tweeted Tuesday.

In addition, Jhené Aiko will sing "America the Beautiful" ahead of kickoff, and Zedd will act as the pregame DJ during warmups.

The Los Angeles Rams and the Cincinnati Bengals will square off at SoFi for Super Bowl LVI on Feb. 13. Kickoff is scheduled for 3:30 p.m. PT. It will be the second straight season where a team will be playing in a Super Bowl in their home stadium.