LOS ANGELES - The COVID-19 pandemic upended the lives of thousands of people in California, including students who had to adapt to distance learning in March of last year.

"When it first started, I was extremely excited. I was happy to finally not go to school as I'm sure every other kid was, but then I started to miss the social aspect of school because that's where I saw all my friends and got my personal life and I was cut off from that. It definitely seems a bit more lonely," said Emma Jane Kennedy, a 16-year-old junior at Agoura High School in LA County.

Kennedy said students have a lot of opinions about the school closures.

"I think definitely students have a lot to say about what's going on because they're the ones that are really suffering through it," she said.

She believes high school students are being left out of the conversation.

"It just feels like no one is really caring about us because especially the younger grades are starting to go back but high school is really missing out on everything so I'm just hoping that something changes," said Kennedy.

Kennedy said it is difficult to keep up with schoolwork while distance learning.

"I took a lot of hard classes this year thinking that we would go back to campus because it's my junior year and important for college and everything and trying to learn online with Zoom is extremely difficult," she said. 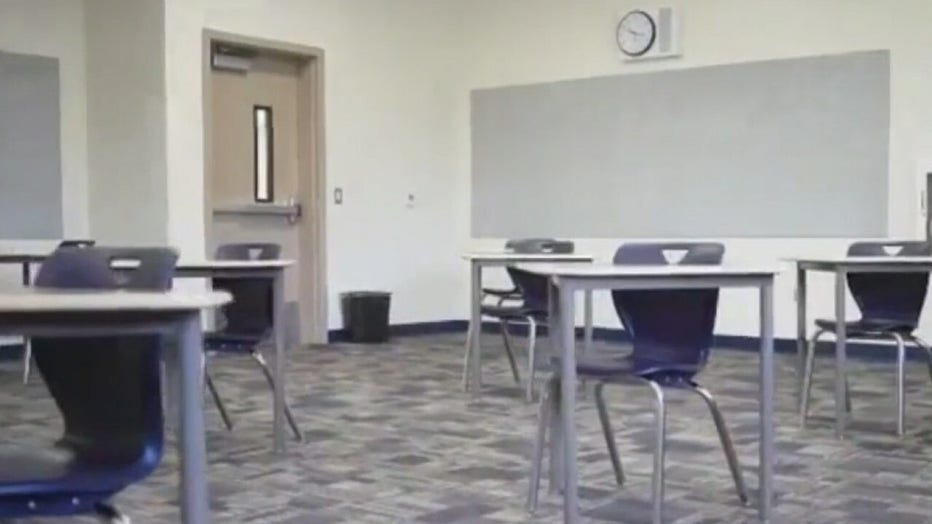 Kennedy and about 150 parents and students participated in a protest outside of Agoura High School on Monday.

"Every parent, every advocate for children, which we all should be, needs to take a good hard look at this and understand that the responsibility does rest on us and how we're willing to show up and what we're willing to do. There's just a real great need," said Amber.

Amber is a mother of four and said she has seen first-hand the struggles students are facing.

"Nobody was checking in on them so while they were suffering greatly and their parents were trying to fight for them, nobody else was aware that the kids were just being pushed under the rug. There's a great amount of indifference where the kids have generally given up, and that should terrify us more than anything else," she said.

Trevizu believes it is important to implement safety protocols for schools.

"There's a number of safety precautions that need to be taken and I think that essentially they will be taken. There does need to be masks, and there needs to be barriers set up so that we're not having transmissions. We do need to work with our teachers and adjust to what the teachers believe too," he said.

Trevizu has called his local representatives to voice his concerns and also has a message for Governor Gavin Newsom.

There are teachers and unions fighting for vaccinations before returning to the classroom due to safety concerns for their wellbeing. On Wednesday, Dr. Barbara Ferrer from the LA County Department of Public Health said LA County teachers, and other essential workers will be eligible to start receiving the vaccine within 2 to 3 weeks.

"I'm pleased that in this next group, we do have educators and childcare workers. We have everybody in food and production. We have our law enforcement folks and we have our emergency responders," said Ferrer.

Ferrer said low vaccine supply will be an issue.

"It's always going to be hard when you have scarcity to figure out who goes first," she said.

Amber said she doesn't want anyone to be put in danger by returning to the class setting.

Ferrer said there were 1,700 schools in LA County that reopened last fall, and 300 more schools will reopen soon through the waiver process.

"We saw very few outbreaks at those schools even during the surge where we saw outbreaks and of all the outbreaks we saw, they were small and very well contained," she said.

RELATED: Critics say Newsom's $2B plan to reopen California schools is not enough

Governor Gavin Newsom announced a 6.6 billion dollar plan to incentivize schools to reopen and address learning loss. Newsom said a phased reopening plan for schools could be announced as early as Friday.