Drivers across Southern California dealt with soggy conditions and some flooding.

LOS ANGELES - A storm approaching from the northwest is expected to drop a half-inch to nearly 2 inches of rain in Los Angeles County Monday, according to the National Weather Service.

The main front of the storm system -- and the heaviest rain -- will likely hit the Los Angeles area around noon Monday and move out of the area fairly quickly in the afternoon, the NWS said. 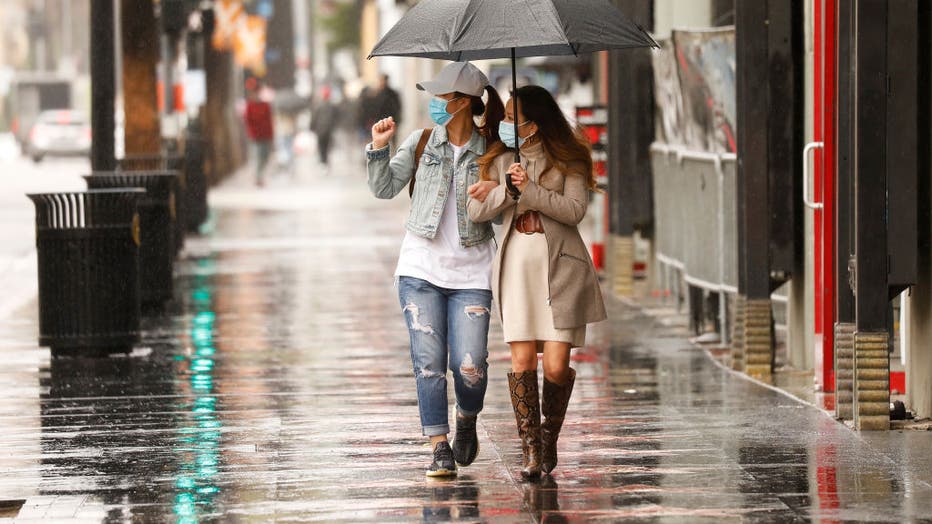 The forecast also calls for the possibility of minor flooding and gusty winds.

Recent burn areas could experience minor mud and debris flows, but rainfall rates are not expected to create concerns for older burn areas such as the Bobcat or Ranch 2 fires, according to the NWS.

Thunderstorms are not expected during the storm, which is expected to move to the east by late Monday evening.

Upslope areas of southern Santa Barbara and Ventura counties could see 1 1/2 to 2 inches of rain, while other areas could get as little as a half inch to an inch, forecasters said.

A wind advisory was issued for the Los Angeles County mountains -- excluding the Santa Monica range -- from 4 a.m. to 2 p.m. Monday, and for the Antelope Valley from 8 a.m. to 2 p.m. Gusts were expected to reach 50 mph in both areas.

The storm is not expected to bring significant snow to the area, with levels remaining well above 8,000 feet, forecasters said.

A high surf advisory is in effect at Los Angeles and Orange County beaches from 11 a.m. Monday to 3 a.m. Wednesday.

Cooler temperatures are also expected Monday, with highs in the upper 50s and 60s. Dry and warmer conditions are expected during the rest of the week.