As vote tallies slowly trickled in days after Election Day, protesters took to the streets across the nation amid lawsuits filed in multiple states by the Trump campaign asking that vote counting be stopped.

Demonstrators carrying signs reading “Stop the Count,” “Stop the Steal,” and “Count Every Vote” gathered in several states across the U.S. as Trump and his campaign pushed unsubstantiated claims of voter fraud.

Dueling protests gathered outside the Pennsylvania Convention Center Thursday after the Trump campaign filed a lawsuit in the state. 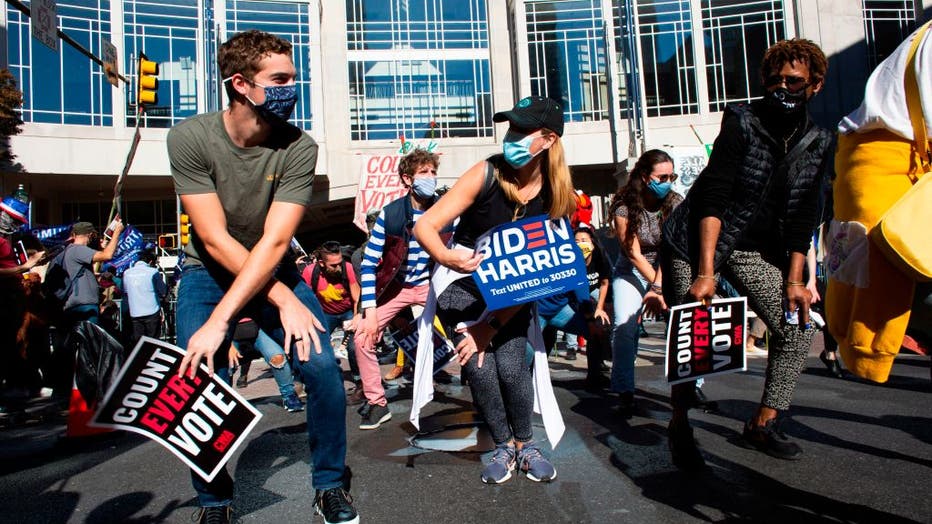 FILE - Demonstrators dance as they protests outside the Pennsylvania Convention Center on November 5, 2020, in Philadelphia. (KENA BETANCUR/AFP via Getty Images)

Organizers from a group called Freedom Works For America called on all "patriots" to meet to "make sure Joe Biden does not steal the election." A small crowd with Trump flags and signs gathered along the sidewalk shortly after 9 a.m. on Thursday.

The pro-Trump movement drew several counter-protesters, according to FOX 29 Philadelphia. The group was seen holding a banner that read "Trump/Pence out now." Several other counter-protesters brought signs denouncing the Trump administration.

Philadelphia demonstrators push back against Stop the Count

Demonstrators rallying for Pennsylvania officials to count every vote gathered in Philadelphia.

In Minneapolis, demonstrators lined the interstate Wednesday night, highlighting not so much an issue with how ballots and tallying were being handled, but their dissatisfaction with both political parties, who they said "actively participate in the suppression of the people’s voice," according to FOX 9 Minneapolis-St. Paul.

The rally was announced on Monday and organizers said the demonstration would go on regardless of the results of the election. The State Patrol told FOX 9 approximately 646 people were cited for being a pedestrian on a freeway and public nuisance and released. Six vehicle were also towed.

“We are here to say we need real change in this society, and that change comes at the ballot box in part. But, it also comes from people standing up together as working-class folks and demanding justice in the streets,” said Cherrene Horazuk with AFSCME Local 3800.

“We understand that no matter what happens on Nov. 3, we have a lot of work yet to do, and that will not stop,” said Misty Rowan with the Anti-war Committee.

Supporters of Trump took to the steps of Arizona's State Capitol, chanting "four more years" and "we love Trump," on Wednesday night as the presidential race remained undecided, according to FOX 10 Phoenix.

Some counter-protesters showed up, but the gathering remained civil. At one point, some of the supporters knelt to pray, asking for "good to prevail,“ FOX 10 reported.

RELATED: Sharpies can be used on voting ballots in Arizona, officials say

“We’re not going to let this election be stolen, period,” Rep. Paul Gosar, an Arizona Republican and staunch Trump supporter, told the crowd outside the Maricopa County Recorder’s Office Wednesday.

Observers from both major political parties were inside the election center in Arizona as ballots were processed and counted, and the procedure was live-streamed online at all times.

In Detroit, a group of organizations called for every ballot to be counted from the historically Democratic-voting city Wednesday. Joe Biden was projected as the winner of Michigan earlier the same day by FOX News and the Associated Press, awarding him 16 electoral votes and building his lead over Trump.

Growing crowds outside TCF Center in downtown Detroit where volunteers were counting ballots drew a significant police response, according to FOX 2 Detroit. 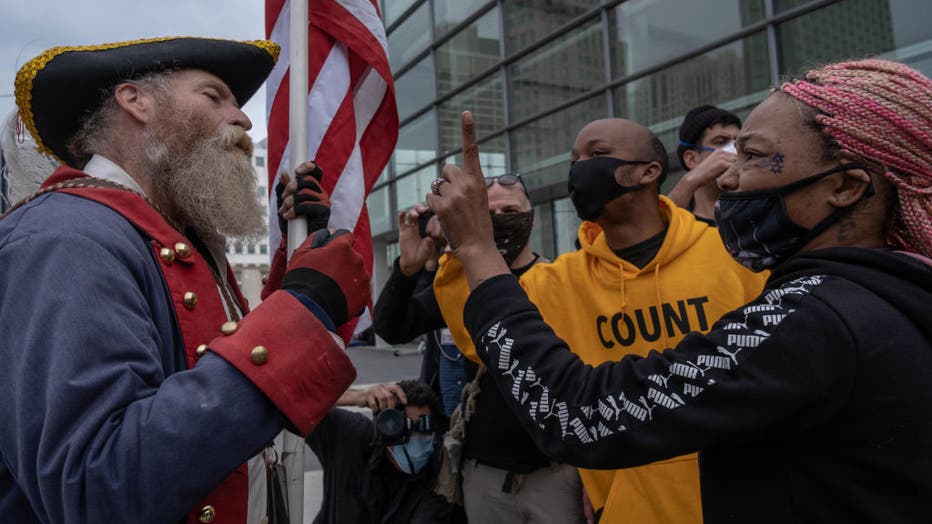 FILE - Counter protesters debate a supporter of US President Donald Trump during demonstrations outside of the TCF Center in downtown Detroit, Michigan November 5, 2020. (SETH HERALD/AFP via Getty Images)

Michigan Attorney General Dana Nessel, a Democrat, said Wednesday that both parties and the public had been given access to the tallying, “using a robust system of checks and balances to ensure that all ballots are counted fairly and accurately.”

In New York, the NYPD announced that it had made approximately 50 arrests following protests in New York City on Wednesday night as demonstrators started fires, spit, and threw eggs at officers, FOX 5 New York reported.

Dozens of people were reported to have been arrested in New York on November 4 after police said individuals … attempted to hijack a peaceful protest in Manhattan.

Meanwhile, a riot was declared in Portland, Oregon, and protesters took to the streets in Seattle on Wednesday as demonstrators demanded that every vote in Tuesday’s election be counted. Oregon Gov. Kate Brown called the National Guard to manage the unrest in Portland, which has been a scene of regular protests for months.

“It’s important to trust the process, and the system that has ensured free and fair elections in this country through the decades, even in times of great crisis,” Brown said in a statement.

The head of an international delegation monitoring the U.S. election says his team has no evidence to support President Donald Trump's claims about alleged fraud involving mail-in absentee ballots.

Michael Georg Link, a German lawmaker who heads an observer mission of the Organization for Security and Cooperation in Europe, told German public broadcaster rbb Thursday that “on the election day itself, we couldn't see any violations” at the U.S. polling places they visited.

Link said he was “very surprised” by Trump's claims about postal ballot fraud because the United States has a long history of this method of voting going back to the 19th century.

“We looked into this. We found no violations of the rules whatsoever,” Link told rbb.

He said neither U.S. election observers nor media found any evidence of fraud either, though the OSCE team on Wednesday repeated long-standing concerns about disenfranchisement of some voters and the distorting effects of campaign finance laws.

Link said there were some instances of errors being made “but no systemic interference or even manipulation with the postal ballots whatsoever.”

The Associated Press and Storyful contributed to this report. This story was reported out of Los Angeles.