A southern California school board will consider an agreement Monday for Planned Parenthood Los Angeles to open a clinic at a local high school.

The seven-member school board of the Norwalk-LaMirada Unified School District will vote during a meeting Monday evening on allowing Planned Parenthood to open and operate a clinic for reproductive health care at John Glenn High School in Norwalk.

Abortions and gender-affirming hormone therapy are not listed as services that will be provided at the on-campus site, but clinic staff will be permitted to make referrals to other Planned Parenthood centers "for services not offered" at the school, according to the proposal.

The clinic will also be able to write prescriptions and dispense pharmaceuticals related to reproductive health, including contraceptives, and can provide the insertion of non-surgical long-acting reversible contraceptives (LARCS), including IUDs, according to the proposal.

The proposed agreement says that while the clinic "will encourage students to involve their families in decision making" regarding reproductive health services, minors have the right to consent to those services without parental consent or notification under California law.

PREV. COVERAGE: The U.S. Supreme Court's decision to overturn Roe v. Wade has lead to a surge in sales for "morning after" pills. 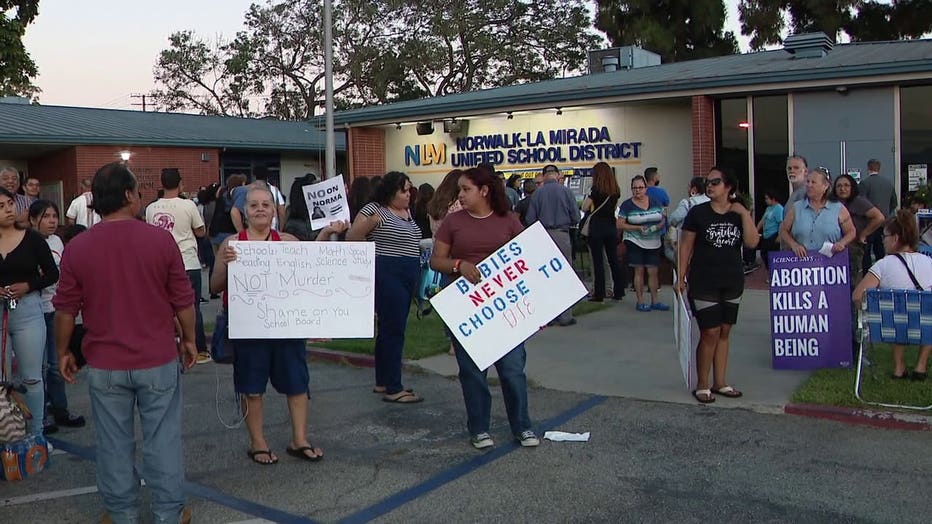 If approved, the contract will last a total of five years, when it will need board approval again and every five years after that.

"Families and taxpayers should be horrified that the Norwalk-La Mirada USD is considering a partnership with Planned Parenthood," Nicole Neily, the president and founder of Parents Defending Education, told Fox News Digital in a statement. "The fact that the contract specifically notes that ‘under California law minors have the right to consent to reproductive health services without parental consent or notification’ is appalling in and of itself – as is the list of services that will be offered to children, from STD treatment to IUDs to ‘referrals to other health centers operated by Provider for services not offered at the Schools.’

"Other Planned Parenthood clinics do provide gender-affirming hormone therapy, so there is a very real possibility students will be referred off-campus to receive this treatment – again, with zero parental notification," she continued. "To add insult to injury, there is no way for parents to EVER obtain this information, as the contract asserts that all medical records are to be maintained by Planned Parenthood (‘neither District staff nor a Student’s parents or guardians may access the Student’s medical records maintained by Provider without the written approval of the Student.’)"

"For over 100 years, federal courts have consistently found that parents – and not schools – maintain primary decision-making authority over their children, particularly when it comes to medical care," she added. "The Norwalk-La Mirada school board should be ashamed that this contract is even up for consideration – and be mindful of their significant legal exposure should it be ratified."

After Fox News Digital reached out to the school district and school board members inquiring about the proposal, the district announced without explanation that discussion on the proposal would be postponed.

"The Norwalk-La Mirada Unified School District Board of Education will postpone discussion of Board
Agenda Item #12a regarding the Planned Parenthood clinic at John Glenn High School. As a result, action will not be taken this evening during the regularly scheduled Board Meeting," the statement read. "The Board of Education and Norwalk-La Mirada Unified School District has no further comment at this time."

The school district and school board did not respond to Fox News Digital’s requests for comment.

Planned Parenthood has been partnering with local schools to "create a safe space" for students to receive reproductive health care and education, the organization has stated.