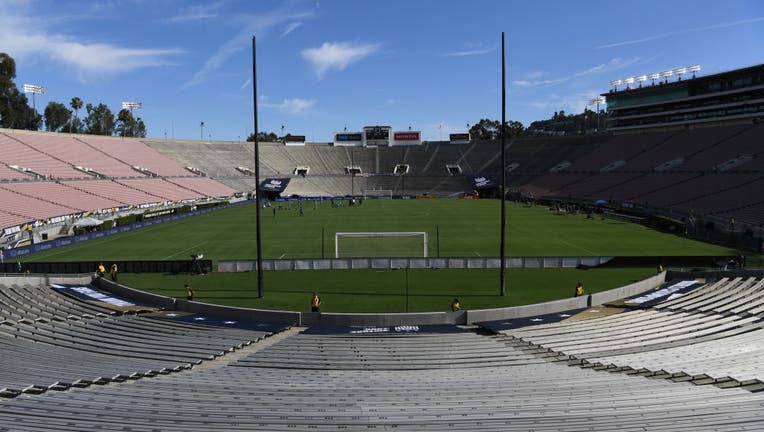 PASADENA, CALIFORNIA - AUGUST 03: General view of the Rose Bowl prior to the first game of the USWNT Victory Tour against the Republic of Ireland at the Rose Bowl on August 03, 2019 in Pasadena, California. (Photo by Brad Smith/ISI Photos/Getty Image

PASADENA, Calif. - The 2021 Rose Bowl game has been relocated from Pasadena to Texas, leaving Southern California without its signature New Year's sporting event for the first time since 1942.

Officials announced Saturday that the game -- a College Football Playoff semifinal -- will played at AT&T Stadium in Dallas on Jan. 1, 2021.

The decision was based on "the growing number of COVID-19 cases in Southern California along with the inability to host player and coach guests at
any game in California,'' according to a statement from the Pasadena Tournament of Roses.

"We know that the decision was not an easy one to make,'' said David Eads, Tournament of Roses CEO and executive director. "While we remain confident that a game could have been played at the Rose Bowl Stadium, as evident in the other collegiate and professional games taking place in the region, the projection of COVID-19 cases in the region has continued on an upward trend.'' 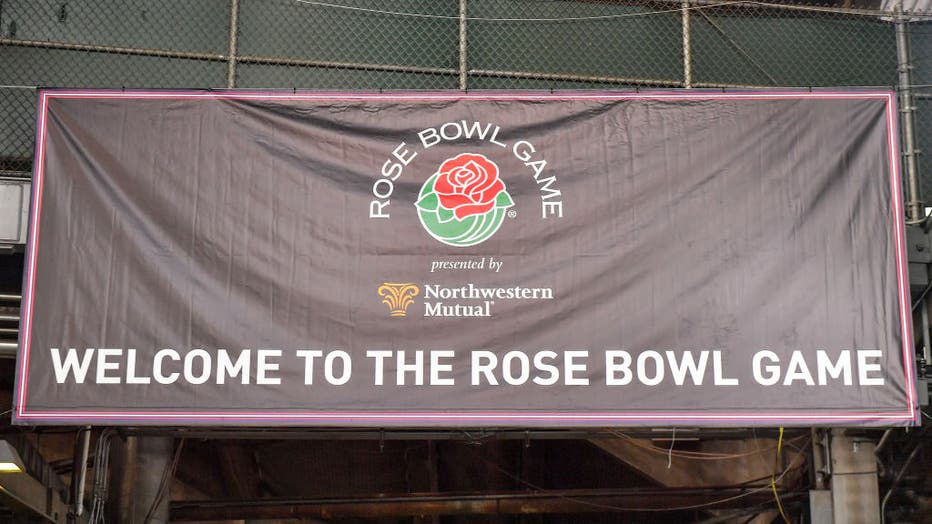 PASADENA, CALIFORNIA - JANUARY 01: A general view of the Rose Bowl sign hanging in the hallway during a game between the Oregon Ducks and the Wisconsin Badgers at the Rose Bowl on January 01, 2020 in Pasadena, California. (Photo by Alika Jenner/Getty

The Tournament of Roses received word late last week that the state of California would not make a special exception for player guests at the game.

Since March, all sporting events played in California have been unable to host spectators and participant families. The Pasadena Tournament of Roses made
its first appeal for a special exception at the Rose Bowl Game in November and
made a second request to the state in December. Both requests were denied.

"We are very grateful to Rose Bowl officials and the City of Pasadena. They have worked hard to listen to the concerns of the CFP, the teams that might have played there, and their state and government officials,'' said Bill Hancock, executive director of the College Football Playoff.

Officials have not yet determined if the game in Arlington will be called the CFP Semifinal at the Rose Bowl Game presented by Capital One. The name is co-owned by the Pasadena Tournament of Roses and the city of Pasadena.

Since 2015, the Rose Bowl has been part of the College Football Playoff system, serving as a semifinal game every three years.

The Rose Bowl is the oldest of the nation's bowl games. The first game was played in January 1902, and the annual tradition began in 1916. Since 1923 the game has been played at or near the beginning of every year at the Rose Bowl stadium in Pasadena, with the exception of 1942, when it was moved toDurham, North Carolina for security reasons during World War II.

RELATED: USC opts out of bowl game due to COVID-19 concerns

Meanwhile, USC announced Saturday that it will decline to participate in a bowl game this postseason. The Trojans were defeated, 31-24, Friday night by the Oregon Ducks, leaving their record at 5-1.

The decision was made following a recommendation from the USC medical team and discussions with the Trojan football leadership council. The football
program has experienced a rise in COVID-19 cases among its players and staff
recently, including positive cases this past week.

"I am incredibly inspired by our players and the sacrifices they made these past six months to play the game that they love,'' Trojans coach Clay Helton said.

"They did everything we asked of them to abide by the challenging guidelines they had to follow to stay safe and well, whether it was daily testing or keeping distant from family and friends or training in less-than-ideal ways. It has not been easy ... We all share the desire to stay healthy and be with loved ones during the holidays and I fully support this collective decision.''