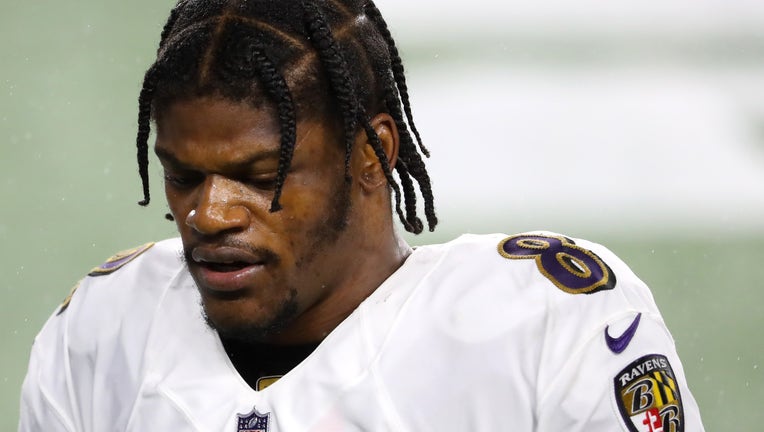 FOXBOROUGH, MASSACHUSETTS - NOVEMBER 15: Lamar Jackson #8 of the Baltimore Ravens walks to the locker room during half time of the game against the New England Patriots at Gillette Stadium on November 15, 2020 in Foxborough, Massachusetts. (Photo by

NFL Network's Ian Rapoport broke the news about the Baltimore Ravens star quarterback testing positive for the virus Thursday night. Jackson and his Ravens were originally scheduled to face the Pittsburgh Steelers Thursday night before a COVID-19 outbreak moved the game to Sunday.

Neither the Ravens nor the NFL confirmed Jackson's test result as of Thursday night. Officials did not say if Jackson's teammates have tested positive for the virus.

On Wednesday, the Ravens announced the team disciplined a staff member "for conduct surrounding the recent COVID-19 cases that have affected players and staff at the Ravens." The team did not identify who was being disciplined.

Neither Los Angeles teams, Chargers and Rams, face the Baltimore Ravens in the 2020 NFL regular season.