A rash of robberies has prompted a Beverly Hills store owner to ban indoor mask-wearing.

BEVERLY HILLS, Calif. - A Beverly Hills store has implemented a new policy prohibiting mask-wearing inside its establishment, citing a rash of robberies at the store where they could not identify the thieves.

The owner of 'Kitson' on Robertson Boulevard, Fraser Ross, released a statement about their new policy:

"At Kitson, we prioritize the safety of our staff and customers. We noticed a disturbing trend of individuals wearing masks to avoid identification in various situations including, but not limited to, shoplifting, verbal harassment, and physical assault. The mask mandate may have begun as a health precaution but we believe it is now being used by some people for nefarious purposes. To that end, we enacted our own mandate of sorts. We do not allow the wearing of masks in the store during regular business hours. Those people who wish to wear masks are free to set up an appointment for a personal shopping experience or visit our website."

Santos Hemenway, a sales associate at Kitson, spoke to FOX 11 about the policy too. He said it has deterred some customers from shopping at the store, but there are customers who like the policy.

"This is not something we wanted to do, but it's what we have to do to keep the safety of our employees and our assets," said Hemenway.

He said there have been robberies at the store recently, and their high-end cameras are not able to identify the suspects due to masks.

"Especially in the last few weeks, we've had multiple events where people have come in using masks and have chosen to steal or try to steal assets from our store which is very unfortunate. We definitely have security guards at all of our stores and we've installed high-security cameras, but [the mask] covers their face, the most important part of their face that we need to use when showing the police," he said. 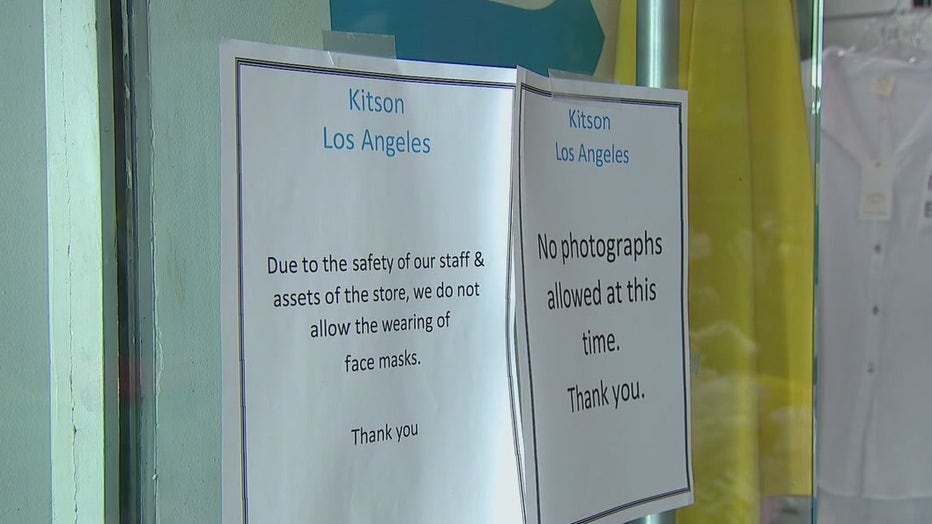 Hemenway said other stores in the area are experiencing robberies too.

"We've seen several shops shut down because it's too dangerous," he said.

He said the area has become unsafe in his opinion.

"It's so important for us to feel safe. I live nearby and I walk home and it's gotten to a place where I live in a close vicinity, but I'm still scared. I'm always looking over my shoulder, thinking about other routes I can take just to get home and nobody should have to feel like that in such a wonderful city," said Hemenway.

The store does allow people who prefer to wear a mask for safety to shop before or after their business hours as long as they schedule an appointment with the staff.