TUSTIN, Calif. - On the first day of school at Hughes Middle School in Tustin, a student was escorted out of a classroom for not wearing a mask per the school's policy, and some parents protested outside of the school following the school's decision.

Ezra Nelson, 12, said he was asked to put on a mask by his teacher Thursday.

His mother, Emily Nelson, said he has a medical condition preventing him from wearing a mask.

"Ezra has a condition, a health condition that prevents him from wearing a mask. We opened a 504 plan with the school last year and he has a note from a medical expert as well, but I dropped him off today about 8:30 a.m. and by the time I got home around 8:45, I had a call from the Vice Principal letting me know Ezra was pulled out of class," she said.

Emily would not disclose the medical condition preventing her son from wearing a mask.

"I prefer not to. We're allowed to keep that private but we do have a note and he has been treated," she said.

Emily said she ended up coming to the school after speaking with her son.

"He was balling and I could tell that it was affecting him very much mentally so I said I'm coming down. Ezra actually sat outside from 8:40 a.m. until I picked him up at 2 p.m. and that whole time he was sitting outside in the heat and was not allowed in any building," she said. 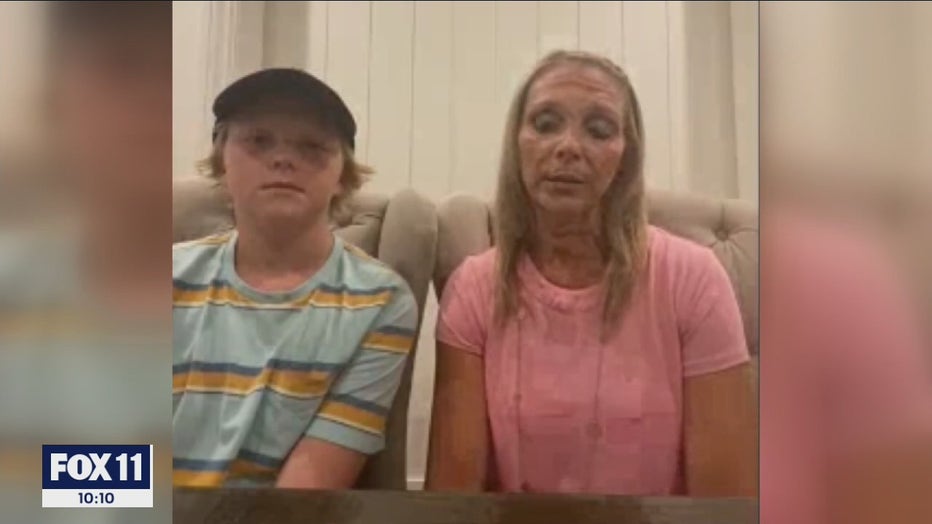 She said Ezra has gone down this road several times last year for the same reason.

"He was in the principal's office and I did receive calls last year too. He [Ezra] did try. He gave it a fair try. I bought him a special mask. I bought him mints and mint chapstick to help him feel like he could breathe so he gave it a try," she said.

Emily said she then took it a step further last year.

"When I presented them with the note last year and asked to open a 504 for my son to make a plan so he could get a free and fair education and the 504 plan should provide him with an opportunity to do that even disregarding the medical condition, they basically said there's no exemptions. They said that for him to go back to school, we had two options, put on a mask or leave school so I said essentially, are you kicking my son out for his medical condition, and are you segregating him? They didn't answer that, and they said it was a mask or go home, " she said.

"Tustin Unified School District successfully welcomed students back for the first day of school today. All public schools are required to meet or exceed all health and safety standards established by the CDPH and the health and safety of our students and staff is our number one priority. We completely understand the frustrations and fatigue some might be experiencing as we enter another school year during the global pandemic. We are doing everything possible to provide healthy and happy learning environments for our students. There are options available in the form of independent study for anyone that may be opposed to the state’s mask mandate. Masks are only required indoors and not required during any outdoor setting which gives students frequent mask breaks throughout the day. We appreciate how collaboratively our community has worked together to create the safest learning environments possible for our students and staff."

Emily Nelson said her son wants to learn in school with his peers.

"Obviously we can step away from the school system and do private school or homeschooling but Ezra chooses to be at school. He wants to be there with his friends. I know there's a lot of parents who have pulled their kids out of school. Will we get to that point? Maybe, possibly, but right now we're going to stand our ground," said Emily.

Emily said they will go to the school Friday to try again, though the school policy remains. She said she will be meeting with school officials too.

"We've stood our ground and we're going to take it a day at a time but we're showing up to school tomorrow and we're gonna give it another try tomorrow. The school did reach out to me and decided they want to have another 504 meeting with me tomorrow morning," she said.