Armenia hands over territories to Azerbaijan

Tonight Armenia is handing over one of its historic territories to Azerbaijan. Part of a peace agreement announced on Monday. The territory is home to monasteries and monuments that date back more than a thousand years.

LOS ANGELES - As of November 15th Armenia was to have turned over one of its historic territories to Azerbaijan, under the agreement signed by Armenia, Azerbaijan and Russia earlier this week to end the war in Artsakh.

The handover was part of an agreement announced on Monday to end the 44-day war. The territory is home to some of the most historic Armenian monasteries and monuments.

One of the churches dates back to the 9th century.

Priest Hovhannes Hovhannisyan, the Abbot of Dadivank Monastery, along with a handful of parishioners have said they don’t plan to leave. Meanwhile, thousands have left their homes behind in a mass exodus.

Thousands of Armenians have also spent the week visiting Dadivank.Araz Garakanian is from Houston Texas, she went to Armenia for a visit and has been there since to help with the war effort. She said the journey to Dadivank was surreal, as she witnessed history unfold before her very eyes.

"As we were driving, I am seeing Armenian tanks and soldiers driving out of Artsakh. Imagine living there for thousands of years, and it's your grandparent's home, and they've built it from the ground up and you have so many memories in there and you're setting it on fire and watching it burn down. Then as we were leaving Artsakh we are seeing the Russian troops just tank after tank, truck after truck just endless. And I am just like wow,” said Araz Garakanian. 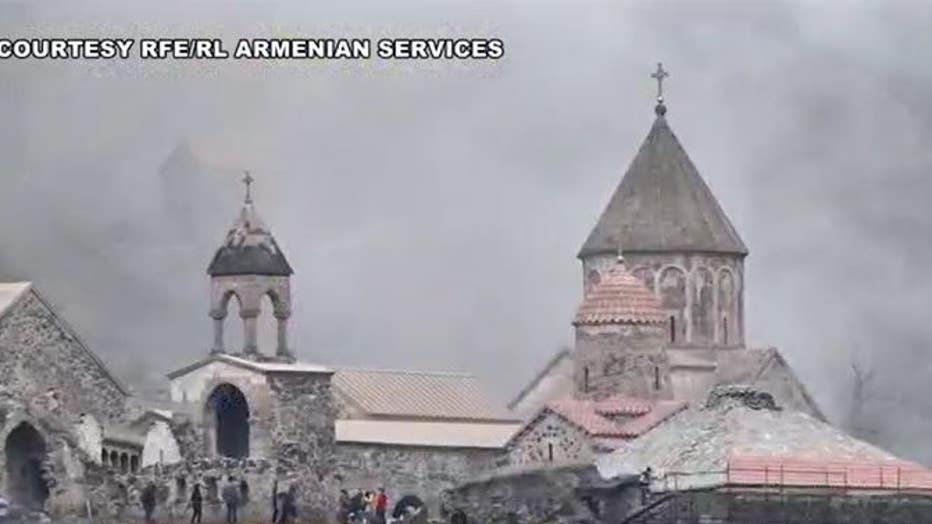 Dadivank is an ancient monastery built between the 9th and 13th centuries. Father Hovhannes vowed to stay behind.

“ I will stay here. I’m going to stay in my church,” said Father Hovhannes.

Many have been concerned for the Father’s safety but comforting news came the day before that Dadivank will be under the protection of Russian peacekeepers and is out of danger.

But many still worry there will be more destruction of Armenian Monasteries.

“These cross-stones were not like this, they were covered in dirt and mud under Azerbajiani rule during the Soviet era, I washed them by hand,” said Father Hovhannes. Before word had come that the monastery would be protected, the 800-year-old cross-stones were being removed to be taken to a safe place, but now they will remain in Dadivank.

“I still have hope. I am waiting for a miracle from God. This is a problem only God will be able to solve,” said Father Hovhannes.

Armenians around the world are appealing to the international community to ensure their religious and cultural monuments are protected when Azerbaijan takes control.