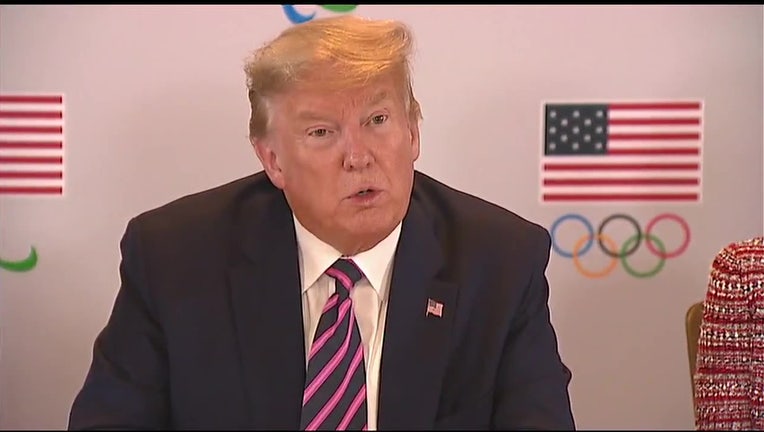 LOS ANGELES - President Donald Trump made a quick stop in Los Angeles Tuesday afternoon where he met with organizers of the 2028 Olympic Games and attended a fundraising event in Beverly Hills.

During his meeting with L.A. Olympic Games organizers, the president signed a declaration vowing the federal government's support for the 2028 games. One subject on the mind -- homelessness.

Trump’s remarks on LA’s homeless during visit to SoCal

L.A.'s homeless count went up last year despite increased local spending to fix it. The president was asked how the L.A.'s homeless situation could be cleaned up and whether he saw the federal government getting involved.

"Well, we had no role, but we’re taking a role in it. I see it, see what’s happening to L.A., I see what’s happening to San Francisco, some great cities. I said to my people, whether they like it or not, we need to do something...you have needles, you have things we don’t even want to discuss all over the streets flowing into the oceans...If they can’t do it themselves, we’re going to do it, the federal government is going to take it over. We’re working with the cities, L.A. in particular," said Trump.

President Trump was also asked about another hot topic -- immigration.

"What's your message to those who are resisting, in terms of immigration policy in this state, especially talking about security for these games," asked FOX 11 political news reporter Elex Michaelson.

"It’s terrible, you look at sanctuary cities, as you know they're dangerous. Look at some of the horrific crimes that are committed that wouldn't happen if you didn't have sanctuary cities for criminals. With L.A. and San Francisco, and other places, they have one thing in common, the leadership...No. 1, you look at the homeless and how horrible the situation that is, but also look what it's doing to your cities. So disgraceful. These are cities that 10 years ago were the most beautiful cities and now, people walk away and leave, and say horrible things," Trump said. "If they don’t get it cleaned up fast, we’re going to come in and do it."

On Wednesday, Trump will visit Rancho Mirage in Riverside County for a fundraising golf outing and reception hosted by Oracle Chairman Larry Ellison before flying to Phoenix for a campaign rally then back to Las Vegas.