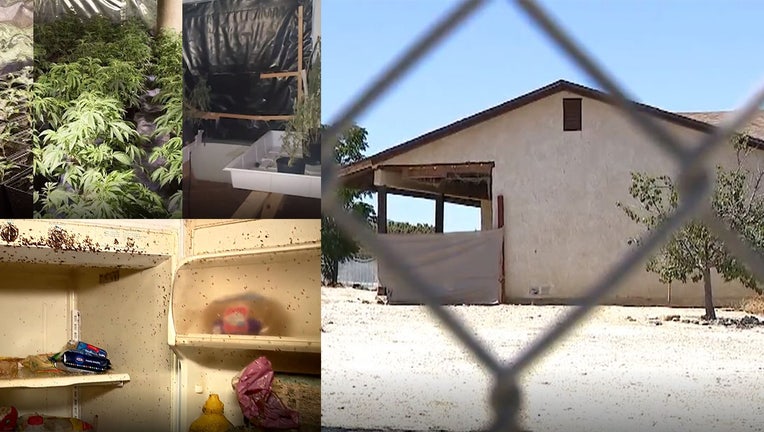 PINION HILLS, Calif. - A Pinon Hills homeowner has been left financially ruined after the tenant she was renting her house out to converted the home into a professional marijuana grow operation, destroying the house in the process.

A Pinon Hills homeowner has been left financially ruined after the tenant she was renting her house out to converted the home into a professional marijuana grow operation, destroying the house in the process.

The homeowner asked we don’t use her real name, so we will call her Katherine.

“This tenant absolutely destroyed the whole house completely,” Katherine said. “There are no words to describe it, it’s not even a house now, it’s a dump site that’s just been destroyed.”

Katherine walked FOX 11 through the home, and the condition is so bad that masks are required.

Black mold lines the walls in almost every room. Bags full of discarded cannabis plants litter the floor. All of the windows are blacked out, hoses run through the ceiling for a watering system, holes are drilled through walls for impromptu wiring, and a circuit breaker is bypassed.

Spoiled food still stocks the fridge, which is now home to thousands of insects. To understand what happened to Katherine, you have to rewind the clock to summer 2018.That’s when Katherine had spent tens of thousands of dollars to remodel her home, with the intention of renting it out for income.

She posted an online ad to find a tenant, and a woman responded.

She said her name was Carol Bryant, a mother of two from Inglewood who worked at a nursing facility.Bryant provided ID, her social security card, her pay stubs, her bank statements, utility bills, and even her W-2 forms, and it all seemed to check out.

“I leased it to her because all the documentation she sent my way was so impressive that I thought I had the best tenant on the planet,” Katherine said. But Katherine never verified the documents, and she made the mistake of never meeting Bryant in person to hand over the keys.

“Well I didn’t get the connection because she was a black gal and she was sending her brother Johnny to meet me and when I met him he was Hispanic,” Katherine said. “I didn’t question anything, but I didn’t get it.”

Everything was going smoothly until this past August, when rent was late, and Bryant wasn’t responding, so Katherine sent a handyman to check on the house.

“He walked in and just started texting me pictures of the damages showing that she had started up a marijuana grow house,” Katherine said.

The images were shocking, rows of marijuana plants lined the inside of her home, where it was obvious a professional, full on grow house had been underway. There were extreme amounts of black mold throughout the property, plastic shades had partially melted due to intense heat from growing lights, and it appeared that the doors had been kicked in and busted open.

The tenant was nowhere to be seen.

Lieutenant Marc Bracco with the San Bernardino County Sheriffs Department’s gangs and narcotics division reviewed photos of the damage, and told FOX 11 it’s one of the worst cases he’s seen.

“There’s black mold severely in this house, it’s really bad,” Bracco said. “The illegal bypass of electricity is also going on, we can see the cables coming out of the wall.”

Lt. Bracco told FOX 11 that law enforcement has been seeing more illegal grow houses popping up across the southland ever since recreational marijuana was legalized in California, with rental homes becoming a lucrative target.

“Because it’s property they don’t own,” Bracco said. “They can go in for a short time, a long period of time, conduct the illegal operation, take the profits and leave, they don’t care if they destroy a house, it’s very profitable.”

After Katherine discovered what happened to her house, she says Carol Bryant and her alleged brother went dark, and changed phone numbers.

“I’ve never gotten a response of any kind, so clearly they flew the coop,” Katherine said.And after a lengthy FOX 11 investigation, nothing about “Carol Bryant” adds up.

FOX 11 has confirmed that Bryant’s driver’s license number actually belongs to an innocent teacher named Michelle, who is a victim of identity theft.

We sent the license to the DMV, who confirmed that the photo on the license is fraudulent.

“Our program experts have reviewed the attachment you provided and determined the photo is not valid,” the DMV wrote to FOX 11.

Katherine. But when FOX 11 contacted Goodlord, the business said they had never heard of a Carol Bryant.

When FOX 11 stopped by addresses in Inglewood and Pasadena that matched up with Bryant’s supposed name and date of birth, other people were living there who have no involvement.

FOX 11 now believes that Carol Bryant is a fake persona, and it’s unclear who the photo on the license actually depicts.

“I don’t know if she even exists,” Katherine said.

It’s unclear who destroyed Katherine’s home, but at this point, it’s safe to say fraud, forged documents, and identity theft are all likely in play.

Katherine is now left with no source of income, and a trashed house worth nothing in its current condition.

Her insurance provider sent her a letter denying her claim for coverage because of the presence of a controlled substance in the house.

“I don’t have coverage, I don’t have money, I honestly don’t know what to do,” Katherine said. A heavy price to pay, after Katherine admits, she was far too trusting.

“What I’ve learned fromo this is I’m not a good candidate as a landlord, because I care too much,” she said.

Katherine told FOX 11 that on the advice of her attorney, she hasn’t reported the incident to police out of fears her home will be red tagged, shut down, and foreclosed on. She said she can’t risk losing it completely as she will have nothing left.

She hopes to make repairs to the home first, and said contractors estimate those repairs could cost around $80,000, but she doesn’t have the money.

Katherine has set up a GoFundMe account to accept donations from anyone who would like to help her.