Wild winter weather has arrived in Southern California with massively strong winds causing downed trees and power lines. One Pico Rivera boy is OK after a 350-pound tent came hurling at him on Sunday afternoon.

PICO RIVERA, Calif. - Wild winter weather caused a slew of problems in the Southern California region on Sunday including trees on top of cars, down power lines and a 350-pound tent that nearly clobbered a 10-year-old Pico Rivera boy.

“I heard screaming and a ‘bang!” says Nelson Jr.’s uncle, Tony Corral, who lives across the street.

RELATED: Power outages across the Southland due to strong winds has cut electricity to hundreds of customers

“It hit the first house and started flipping and landed on top of two cars and damaged my uncle’s car.” 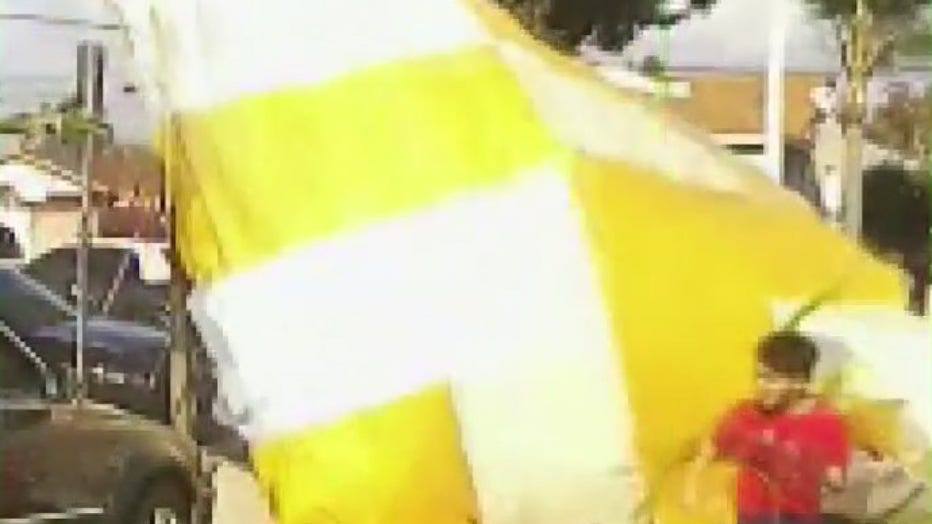 The incident, caught on the family’s Ring surveillance camera shows the child dodge the giant yellow and white tent just in time.

Corral says the tent came tumbling down the street from a neighbor’s house half a block away.

“I looked out my window and saw a huge tent in the sky just coming down full force,” says Corral.

“It landed where the kids were playing and they were just trying to get out the way.”In this windy weather, advice from Corral.

“Watch out for flying objects. You never know what’s going to fall from the sky.”

Thankfully, the boy is OK.