HARRISBURG, Pa. - Pennsylvania Gov. Tom Wolf announced in a statement released Wednesday that he has tested positive for COVID-19.

The Democratic governor says he is in isolation at home following the positive test result he received from a test he took on Tuesday. He also says he is not experiencing any symptoms associated with the virus.

Wolf’s spouse, Frances Wolf, has been tested but has not received the result, Wolf said. She is quarantining with him at their home in Mount Wolf, near York. 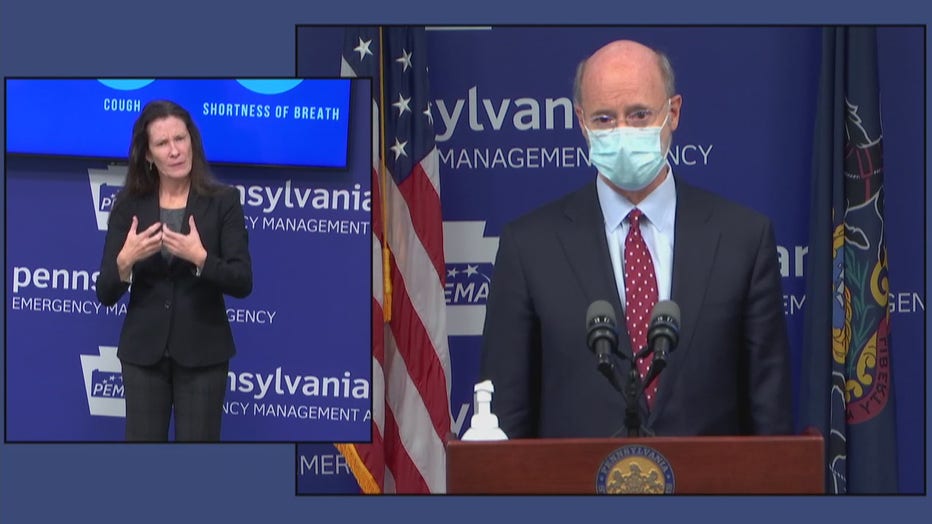 During a briefing on Monday, Pennsylvania Gov. Tom Wolf reiterated his warning that hospitals could soon become overwhelmed due to coronavirus case spikes.

Wolf, who is 72, said he continues to work remotely.

“As this virus rages, my positive test is a reminder that no one is immune from COVID, that following all precautions as I have done is not a guarantee, but it is what we know to be vital to stopping the spread of the disease and so I ask all Pennsylvanians to wear a mask, stay home as much as possible, socially distance yourself from those not in your household, and, most of all, take care of each other and stay safe,” his statement read in part.

Wolf’s public schedule for the past week had just one event -- a virtual news conference about the pandemic on Monday where he appeared along with his health secretary, Dr. Rachel Levine, and one of her deputies. All wore masks as they took turns at the podium.

People considered to be “close contacts” of Wolf have been told of their possible exposure and are now in quarantine, including Levine and several members of his senior staff. All have tested negative so far, according to the governor's office.

Wolf's spokesperson, Lyndsay Kensinger, said "multiple members” of the governor’s security detail recently tested positive for COVID-19. She said Wolf has been primarily at his home or working from the offices of the Pennsylvania Emergency Management Agency over the past few months.

Wolf is one of several governors who have tested positive for the virus that causes COVID-19, including the governors of Oklahoma, Missouri, Virginia, Nevada and Colorado. President Donald Trump also contracted the virus.

Earlier this week, Wolf warned that a continued surge in coronavirus cases could overwhelm the state's hospitals and healthcare systems.

Additional pandemic restrictions might be on the way, said Wolf, who did not elaborate on what his administration is considering but acknowledged the ones already in place have not worked.

“Over the course of the past two weeks, unfortunately, Pennsylvania's situation has become even more dire, and I find myself here saying things I really, really wish I didn’t have to say,” Wolf said at a virtual news conference. “If we don’t slow the spread of this dangerous virus now, the reality is that COVID-19 will overwhelm our hospitals, will overwhelm our health care system.”

Citing sharp increases in new infections, hospitalizations, and deaths, Wolf said the unchecked spread of the virus in all regions of the state means that resource-sharing agreements among hospitals could soon begin to break down and force them to begin rationing care.

“If the worst happens, hospitals will not be able to treat all sick Pennsylvanians,” he said. “They’ll be forced to turn away people who need treatment, and that means more Pennsylvanians will die.”

“All it takes is one encounter, one situation where either he didn’t take a mask with him or took the mask off and rubbed his eye,” Dr. Mike Cirigliano speculated.

A spokesperson for the governor’s office says that several of Wolf’s senior staffers, as well as Health Secretary Dr. Rachel Levine are now quarantining. Wolf appeared alongside Levine and other health department officials at a press conference Monday, one day before his positive test result.

“The one thing about this virus is it’s very contagious,” Dr. Mike commented.