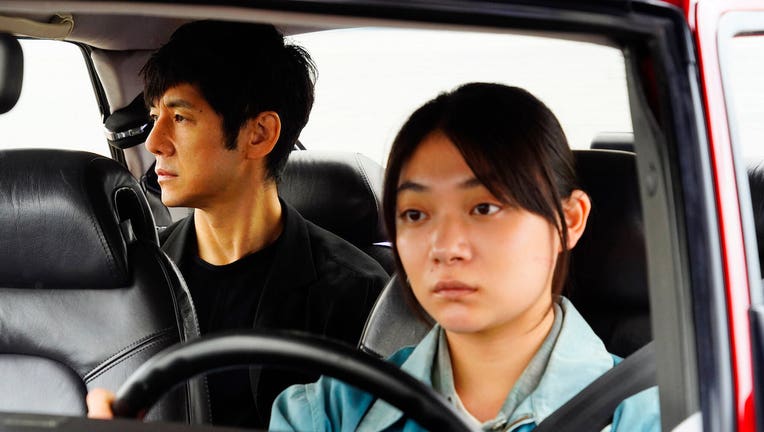 All this week we’ll be spotlighting the 10 films nominated for the big prize. And since we could all use more stuff to watch these days, we’ve also rounded up recommendations for movies (and TV shows) that echo or influence them in some way — all of which are streaming (for free!) on Tubi. Next up: Ryusuke Hamaguchi's meditative "Drive My Car."

About "Drive My Car"

The premise: "A visualization — more than an adaptation — of Haruki Murakami’s eponymous short story, "Drive My Car" is a road movie sui generis that travels paths of loneliness, loss, and bereavement, and investigates the deepest meaning of artistic representation as a universal key to understanding human nature."

In a year where Japanese auteur Ryusuke Hamaguchi put out not one, but two all-out masterpieces — seriously, check out his three-part anthology of love, lust, and reconnection "World of Fortune and Fantasy" if you can — it feels downright criminal to just talk about one. Yet here we are, with his three-hour opus "Drive My Car" commanding major international awards attention, and rightly so.

Adapted from a short story by Haruki Murakami, "Drive My Car" is a slow but rewarding ride, a reality it acknowledges with a wink: Its opening credits don’t appear until a whopping forty minutes into the film. But there’s method to the madness, the credits splitting the life of our protagonist (an avant-garde theater director played with aching longing by Hidetoshi Nishijima) into two haunting halves: before and after his beloved wife and muse dies of a sudden aneurysm. Her death leaves unanswered questions and unresolved regrets, issues that percolate during the long commutes he makes in his modest Saab 900 to and from the production of "Uncle Vanya" he’s directing in Hiroshima.

Hamaguchi is a patient filmmaker (a student of Kiyoshi Kurosawa) and one of world cinema’s finest dramatists; he’s innately concerned with the impact that communication and performance (of any kind) play in our lives. Characters talk to each other through barriers — those of language, medium, gender and even the line between life and death. And it’s all captured through Hamaguchi’s delicately staged eye

Don’t let the prospect of a ponderous three-hour foreign drama put you off. "Drive My Car" is as evocative and vivid as anything you’ll see this year. Just roll down your window and let its cooling presence wash over you. [Clint Worthington]

How to watch "Drive My Car"

Streaming: "Drive My Car" is currently streaming on HBO Max.

On the big screen: "Drive My Car" is still playing in limited theaters across the country.

What makes this humanistic Japanese epic special is the hypnotic intensity writer/director Ryusuke Hamaguchi maintains throughout its three-hour runtime. There’s something of that slow-burn pacing in James Ivory’s British romantic drama "Remains of the Day," starring Anthony Hopkins and Emma Thompson. And though "Drive My Car" isn’t a thriller (it’s actually a grounded drama about a multilingual production of a Chekhov play), it still put us in the mind of Chang Dong Lee’s tense psychological drama "Burning." Or if you came away just wanting to see more from magnetic leading man Hidetoshi Nishijima, you can watch him play an ex-detective in the 2016 horror thriller "Creepy," or a humble bodyguard in the 2011 Japanese rom-com TV series "99 Days With the Superstar."