LOS ANGELES - Saying images of looted packages littering a stretch of Union Pacific rail tracks in Los Angeles "look like a third-world country," Gov. Gavin Newsom Thursday visited the site to announce a multi-agency push to clean up the mess, along with planned state efforts to combat the rampant theft that produced it.

"What has happened on this stretch of the Union Pacific railroad is unacceptable," said Newsom, who donned a trucker cap and black T-shirt while helping cleanup crews make a dent along the garbage-strewn tracks.

"We are committed to an all-of-government approach to prevent thefts, prosecute the criminals involved and clean up local communities."

The governor said that, in the short term, Caltrans cleanup crews will assist Union Pacific workers over the next few days.

Longer term, he said, the California Highway Patrol will continue its efforts to coordinate with local law enforcement to help prevent theft on railways in Los Angeles.

"How do we make sure we don't have to keep coming back?" Newsom asked. "How do we secure this site? How do we do a better job in making sure that this doesn't have to continue to happen? This is the supply chain. I know all of us are focused down on the water, it's so damn beautiful, and everybody's just focused on containers at the ports, the supply chain."

But, Newsom said, "that's just one part of the supply chain." 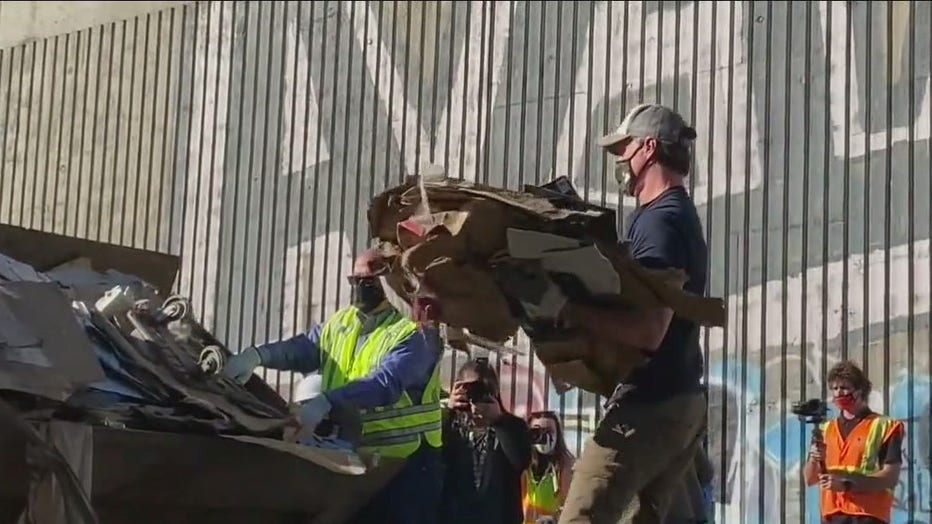 The governor made no secret of his anger at the looting and the litter.

"If I'm intense about this it's because this gets my blood boiling," he said -- while at another point adding, "As we were out there cleaning up, we saw memories that never were because gifts never arrived."

The plan calls for bolstering local law enforcement response, supporting prosecutors and getting guns and drugs off the streets.

It’s a shocking sight... thousands of torn up packages and boxes stretching for an eternity along the Union Pacific rail lines east of Downtown Los Angeles.

It also includes $255 million in grants for local law enforcement to increase their presence at retail locations and combat organized retail crime, along with $18 million to create a dedicated state team of special investigators and prosecutors to prosecute cross-jurisdictional theft-related crimes.

In addition, it would create a permanent Smash and Grab Enforcement Unit operated by CHP to work with local law enforcement to crack down on organized rail, retail and auto theft across the state.

Newsom said operations that fence stolen goods need to be another target of increased state and local efforts.

He added that much of the stolen merchandise ends up on online platforms.

"A lot of this stuff ends up on platforms you've shopped on," he said. "I promise you, all of you. Some of you have bought some of this stuff that was not in those boxes because they ended up on some online platform at a remarkably discounted price.

"You ever ask yourselves how anyone makes money at that remarkably discounted price?"

Newsom said he wasn't focused on who's to blame for the rash in rail thefts, preferring to concentrate on solutions to preventing it from being repeated. But some Republicans lambasted "criminals-first" policies for exacerbating the problem.

"Criminals know how to exploit California's policies for their gain," Senate Republican Leader Scott Wilk of Santa Clarita said in a statement. "Fancy press conference by the governor are not going to discourage one single crime. Californians deserve safer communities, and Republicans look forward to fighting for every neighbor, retailer and employer who is fed up with the Democrats' `criminals-first' public safety agenda."

A group of local Republican Congress members sent a letter to U.S. Attorney General Merrick Garland calling for federal assistance in cracking down on thefts that have disrupted the supply chain.

"In addition, it is important to note that many of these purchases are not just delivered throughout the State of California, but also throughout the United States, affecting interstate and international commerce," the letter stated. "Therefore, the Federal Bureau of Investigation and the Department of Justice play a vital role in federally prosecuting the epidemic of robberies on all freight transportation."