A Bay Area Trump supporter was in Washington when a pro-Trump rally descended into chaos, rioting and pillaging of the Capitol. She describes a sense of betrayal among the crowd when the vice president refused to object to the certification of Electoral College votes for President-elect Joe Biden. She also pushes the theory that agitators were among the crowd.

The FBI has released four posters showing dozens of rioters wanted for storming Capitol Hill earlier this week in an unprecedented attack on the nation’s capital.

The FBI’s Washington Field Office early Friday morning released 40 photos of suspects who illegally broke into the U.S. Capitol on Wednesday afternoon while Congress was tallying Electoral College votes that would confirm Joe Biden as president-elect.

Dozens of people, some armed with guns, roamed the halls of the federal building, smashed or dismantled property, and barged into House and Senate leaders’ chambers. Meanwhile, Hill staffers and lawmakers were under lockdown or hid behind chairs or under tables. 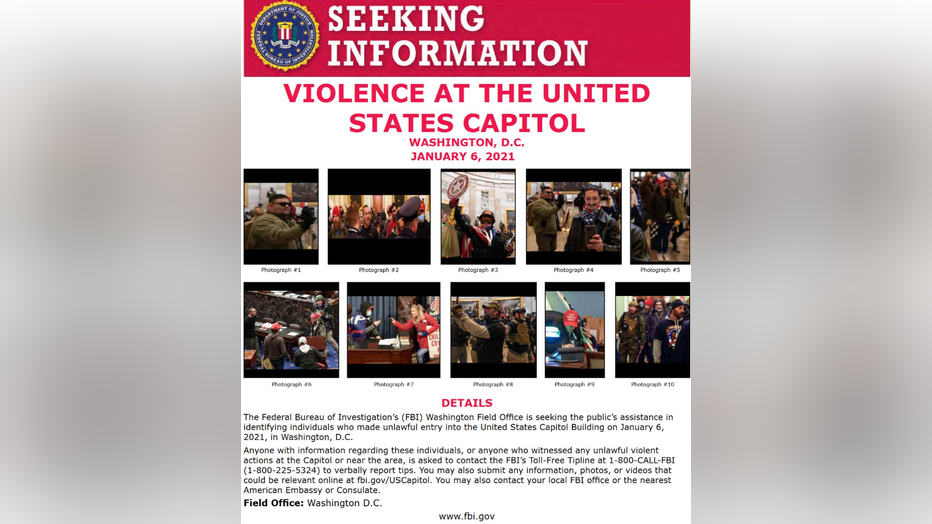 Police have also announced a reward of up to $50,000 for information that leads them to the suspect they believe planted two pipe bombs at the Democratic National Committee (DNC) and the Republican National Committee (RNC) headquarters on Wednesday.

A fourth person -- identified as Ashli Babbitt -- was fatally shot by police during the riots.

U.S. Capitol Police (USCP) later announced the death of Officer Brian D. Sicknick, who died as a result of injuries he suffered Wednesday. Sicknick was injured while engaging with the rioters on Wednesday and collapsed when he returned to his office, the USCP said. His death was announced late Thursday night.

The FBI is asking anyone who recognizes someone from the wanted posters or who witnessed any of Wednesday’s activity to call 1-800-CALL-FBI (1-800-225-5324) or submit information online here.