STANTON, Calif. (FOX 11) - Shattered glass is all that remained Friday night at a crime scene in the 12000 block of Leafwood Drive in Stanton. Police say it's from the driver's side window of a car first spotted by a neighbor.

"I just saw a car that was dirty," that neighbor, who asked to only be identified as Gina, told Fox 11. "I didn't know [with what] but looked like it could've been blood. It was dark, dark red."

Gina says she was walking her dog, who started barking when she spotted the broken glass and blood. "I just called my neighbor. She came and she said, 'Yeah, call 911. There's a dead body in there.'"

Orange County Sheriff's deputies responded around 10 a.m. and confirmed finding a man's body in the trunk. Lt. Nathan Wilson serves as chief of Stanton Police Services and said investigators were working "to examine the body and identify who the individual is and make a preliminary determination on time of death and possible cause of death."

But in a statement, the Sheriff's Department said they first want to know whether the man died at another location. Neighbors think so, pointing to what they believe is a second crime scene within walking distance on San Marcos Drive. Gina walked there.

"When I saw it, I felt that it happened there and then they just dumped the car over here," Gina said. "There was blood on the concrete in the parking lot three blocks away, and there was no blood on the street here."

There's no blood on Leafwood Drive, but there are several security cameras. One neighbor, who didn't want to be identified, said he handed over video to the police that shows two possible suspects around 11 Thursday night.

"They opened up the lid of the trunk and then they looked inside and closed it," the neighbor recalled seeing. "Some people got out of the car then they went to the car that was being dropped off, and after that, they went back to the van and took off."

Police have not said how the man was killed or identified him. Anyone with information is asked to contact OCSD at 714-647-7000. Anonymous tips can be reported to OC Crime Stoppers at 1-855-TIP OCCS. 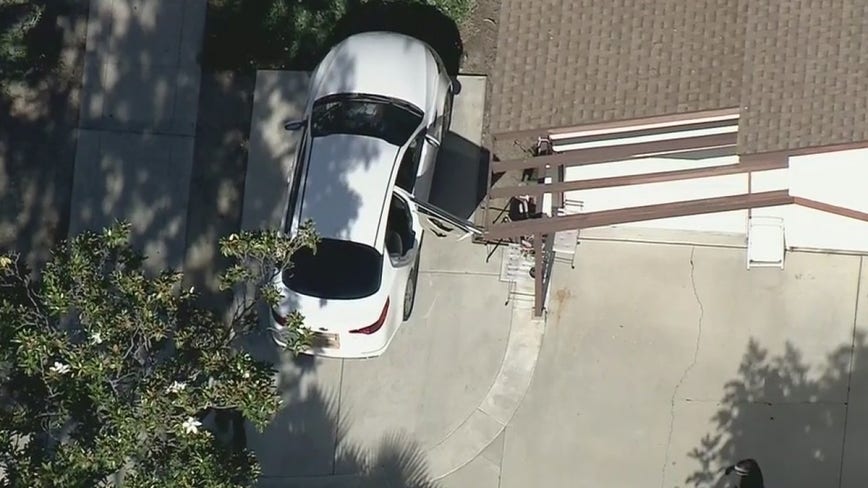