Two suspects have been arrested for fatally shooting a Monterey Park police officer in Downey. According to the DA's office, Gardiel Solorio was killed during an attempted robbery.

LOS ANGELES - Two people - including a 17-year-old - have been arrested in connection with the fatal shooting of an off-duty Monterey Park police officer who was gunned down outside an LA Fitness in Downey on Monday.

Gardiel Solorio, 26, was shot multiple times while sitting in his car outside the gym in a busy shopping center located in the 12000 block of Lakewood Boulevard Monday around 3:45 pm.

Officials said the suspect, Carlos Delcid, 20, approached Solorio as he was sitting inside his car and tried to rob him. Security footage shows Solorio's car backing up and slamming into a parked van as he tried to get away. That's when Delcid allegedly shot Solorio five times at close range, authorities said. 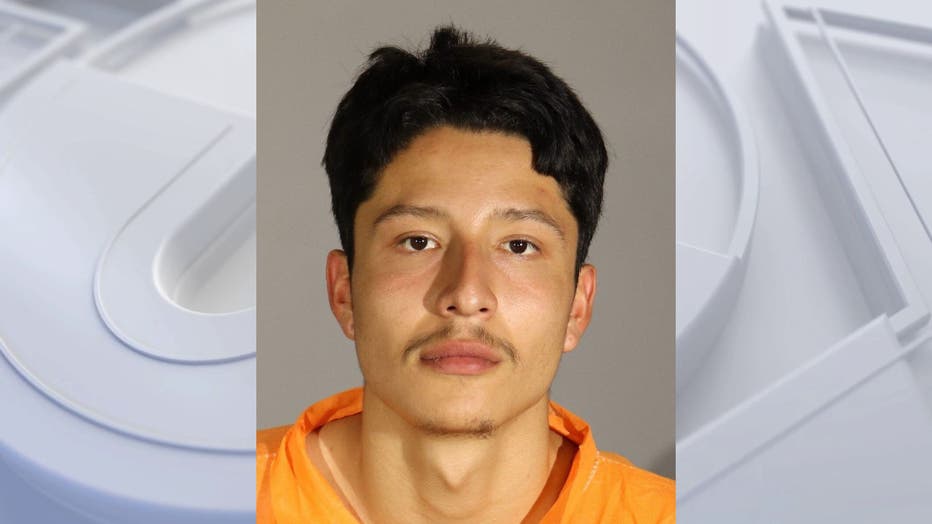 Delcid fled the scene in a car driven by a 17-year-old, LA County DA George Gascón announced Wednesday. He said his office will also be filing charges against the getaway driver.

Delcid was arrested and charged with one count each of murder, attempted robbery and possession of a firearm by a felon with the special circumstance allegation that the murder was committed during a robbery.

Gascón said they will be seeking life without the possibility of parole for Delcid.

At this time authorities do not believe Solorio was targeted because he is a police officer.

"Senseless gun violence has once again taken someone who pledged to protect and serve others," Gascón said.

Los Angeles County jail records show Delcid has been booked a half-dozen times in the past year — the most recent coming Tuesday, a day after Downey police arrested him. He is being held on $2 million bail.

Authorities tell FOX 11 they do not believe Gardiel Solorio was targeted because he was a police officer.

"We all knew from the moment we met him that he had the heart of service and was going to be a great officer," MPPD Chief Kelly Gordon said. "And I could tell that from the moment he walked in and did our first introductions in my office. The family and department are grieving right now, and this is an especially difficult tragedy. It's a senseless act of violence. He was only 26 years old. I don't know about all of you, but I have children that age. So to me this is particularly difficult."

Friends of Solorio said he dreamed of being a policeman since he was a child.

"He was living his dream. Why would someone kill him outside the gym?" a friend said.

We are learning more about the off-duty Monterey Park police officer officer killed in broad daylight in Downey.

A procession was held Monday night as Solorio's body was transported from the crime scene to the LA County coroner's office.

Solorio is survived by his parents, brothers, sisters and fiancée. His family has started a GoFundMe to help pay for funeral expenses