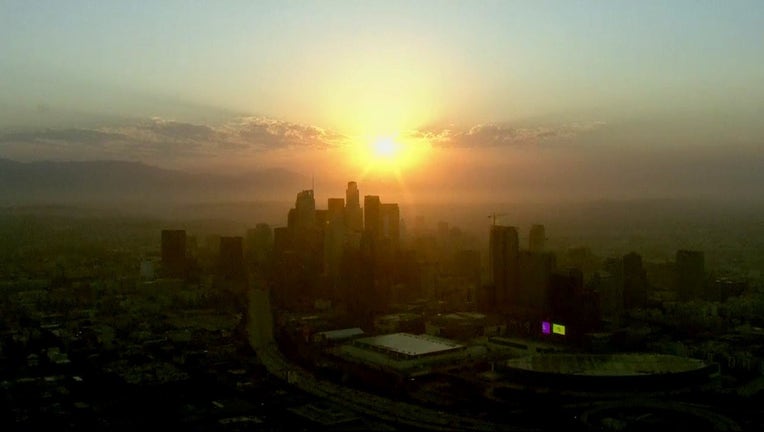 The latest weather and air quality forecast for the greater Los Angeles area, including beaches, valleys and desert regions.

"Triple-digit high temperatures will be common over the hottest valleys, foothills and desert between Saturday and Monday,'' according to the National Weather Service. "Very warm conditions are likely to continue Tuesday through Thursday with increased clouds and possible monsoonal showers and thunderstorms.''

Sunday's highs were expected to reach 89 degrees in downtown Los Angeles, 99 degrees in Van Nuys, 109 in Chatsworth and Lancaster and 110 in Santa Clarita, according to the NWS.

An excessive heat warning was in effect through 9 p.m. Monday in the Antelope Valley and Los Angeles County mountains, excluding the Santa Monica range. Forecaster warned that those areas will face "dangerously hot conditions with temperatures up to 110 expected.''

"Extreme heat will significantly increase the potential for heat-related illnesses, particularly for those working or participating in outdoor activities,'' according to the NWS.

"Drink plenty of fluids, stay in an air-conditioned room, stay out of the sun, and check up on relatives and neighbors,'' NWS forecasters advised. "Young children and pets should never be left unattended in vehicles under any circumstances.''

Health officials urged residents to stay hydrated, wear sunscreen and lightweight clothing, beware of symptoms of heat stroke and check on vulnerable friends and relatives, such as the sick, older adults, pregnant women, children and those who live alone.

Los Angeles County library officials announced that the Lancaster Library, Quartz Hill Library and Acton Agua Dulce Library would be open until 10 p.m. Sunday and again Monday to serve as cooling centers. Information about cooling centers in the city of Los Angeles can be found at online.

The California Independent System Operator issued a heat bulletin Sunday in anticipation of increased electricity demand due to above normal temperatures across California. Potential for resource shortfalls are projected for Monday, but could be made up through voluntary consumer conservation.

If weather or system conditions worsen, the ISO may notify the public about potential energy shortages and the need to conserve. The ISO could also issue a flex alert, a voluntary call for consumers to reduce electricity use during critical times of stress on the grid.