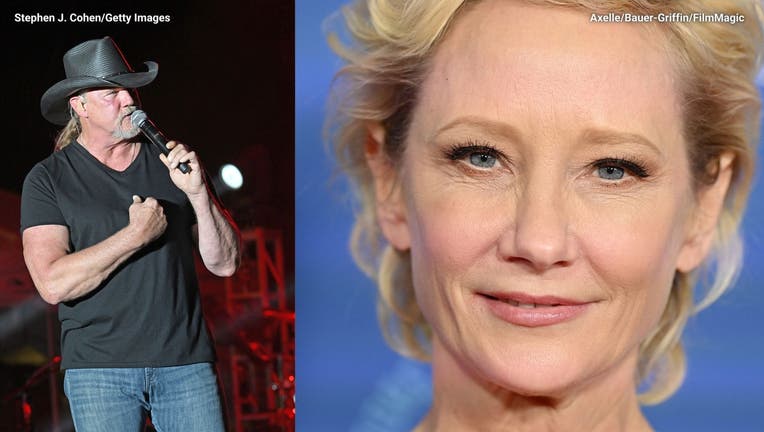 Trace Adkins "enjoyed every minute" of his time working with the late Anne Heche.

Adkins spoke about having the opportunity to work alongside Heche for the film "13 Minutes." According to her IMDb, it was one of Heche's final projects released before her death.

"My time with Anne was way too short," Adkins told Fox News Digital. "I met her and got to work with her and spent a couple of weeks with her and just enjoyed every minute of it."

Adkins spoke about his time with Heche while promoting his upcoming FOX series, "Monarch." The series is a musical drama following a leading family in country music.

Adkins and Heche's project, "13 Minutes," was released in October 2021. The action film follows four families after a tornado gives them 13 minutes to find shelter.

The country music star explained how Heche's energy changed that of everyone's on set, and how he feels about not being able to work with the actress again.

"She was so energetic," Adkins told Fox News Digital. "I mean, the energy that she brought into the room with her was just — it was just infectious, you know. And she just brought everybody up a little bit when she would come on set."

"I enjoyed working with her, and it's just tragic. It's tragic. I hate that I won't get to work with her again."

On Aug. 5, Heche drove her car into a Mar Vista home in Los Angeles. The crash ignited a fire that left the property almost destroyed.

Following the crash, her rep confirmed Heche never "regained consciousness since shortly after the accident." Heche suffered a "severe anoxic brain injury" and remained "in a coma" under medical care at the Grossman Burn Center in West Hills for the opportunity to donate her organs through the OneLegacy Foundation.

"It has long been her choice to donate her organs and she's being kept on life support to determine if any are viable," her representative confirmed to Fox News Digital at the time.

Heche was "peacefully taken off" off life support on Aug. 14 after being legally declared brain-dead on Aug. 11.

The Los Angeles Police Department began investigating Heche for felony DUI after it was reported that someone at the time of the crash had suffered injuries. Originally, no injuries had been reported, meaning all the actress' potential charges would have been misdemeanors. The DUI investigation was dismissed by the LAPD following Heche's death.

Adkins previously paid tribute to Heche on Twitter, writing: "I’m thankful that this road led me to cross paths with Anne.

"I enjoyed every minute I got to spend with her. Her energy was infectious and I thought she was adorable. Ride the wind, darlin," he added.

Heche rose to fame on the silver screen in the late ‘90s for her starring roles alongside Johnny Depp in "Donnie Brasco," with Harrison Ford in "Six Days, Seven Nights" and in Gus Van Sant’s remake of "Psycho."