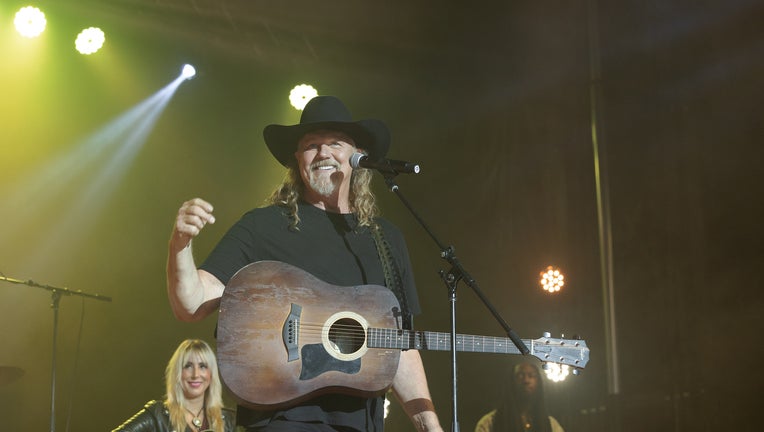 MONARCH: Trace Adkins in the series premiere of Monarch airing in Fall 2022 on FOX. (Photo by FOX via Getty Images) (Getty Images)

Trace Adkins has dozens of Top 40 singles under his belt, and a collection of greatest hits and studio albums that have been certified by the Recording Industry Association of America. He also has a host of Academy of Country Music Awards, in addition to Grammy Award nominations.

But the "You're Gonna Miss This" singer admitted he was a little intimidated to work with legendary actress Susan Sarandon in their upcoming country music drama about a dynasty of singers in "Monarch."

Adkins portrays Albie Roman alongside Sarandon, who plays Dottie Cantrell Roman, in the series, which is set to debut in September on FOX, and marks his first starring role.

He told Fox News Digital that working with Sarandon was "terrifying," but he knew he was learning the ropes from a true icon.

"It was terrifying at first, but then very quickly I realized that she is so good, so professional, that she is going to carry the scene," Adkins said. "You just try to hang on and make it to the buzzer, and she’ll take care of it.

When asked what it was like to kiss the Academy Award-winning actress, he simply replied: "It was an honor."

Adkins also said he didn't "really lean on anybody" for advice when it came to prepping for the role, even though his friends Blake Shelton and Tim McGraw have years of TV experience. Blake has been on "The Voice" for years, and Tim recently starred in the "Yellowstone" prequel, "1883."

"Blake’s thing is a completely different animal," he said. "You can’t compare that stuff." He said he hadn't talked to McGraw, but added: "Tim’s a good actor, I’ve always respected what he does. I’ve just kind of done my own thing, haven’t had to really lean on anybody too much for a lot of advice."

Adkins, who isn't a stranger to acting, with previous stints on television and in the recent movies "Old Henry," "Apache Junction" and "Badland," said playing Albie, his character on "Monarch," wasn't too big of a stretch.

"He's a no-nonsense kind of guy, and I’m kind of that way too," Adkins admitted. "He’s not very animated, and neither am I. We say what we’ve gotta say, and don’t have to yell it … just kind of move through this life as softly and peacefully as they’ll allow us to, but when they don’t – we'll do what we’ve gotta do."

The "Just Fishin'" crooner was impressed with the "great writers on the show" and was always left wanting more after he finished reading a new script.

"There’s a lot of curveballs that are going to come that you don’t see coming," he said.

"Monarch" was made even more special with the guest appearances by friends and family, including one day when Tanya Tucker stopped by.

"It’s a lot of fun to be on this show and have all the musical guests come in. That’s a real treat for me," Adkins noted.

Another small pleasure was being able to delve into the deep history of country music, as Adkins referred to the Hank Williams Jr. and Merle Haggard songs he got to sing.

"I never would have gone in studio and covered that, but it’s been a lot of fun being able to record as Albie," he said.

Country singer Cailtyn Smith told Fox News Digital she was "honored" to be part of the show and sing "The Card You Gamble" for "Monarch."

"I am insanely honored to be singing the theme song for this incredible show," she said. "I fell in love with it instantly when I saw a couple of scenes, especially it being a show about country music. I grew up listening to all of these incredible theme songs."

Little Big Town, Martina McBride and Shania Twain are also set to appear on the drama, which was created by Melissa London Hilfers and also stars Beth Ditto, Anna Friel and Emma Milani.

"I’m super pumped that they’re bringing in all of these legends of country music to be part of the show, it just makes it feel a little more real, and it’s fun to see my friends on TV," Smith said.