Homeland Security Secretary Alejandro Mayorkas visited Del Rio, Texas, on Sept. 20 as the U.S. began flying some of the thousands of Haitians camped in the border town back to their homeland.

DEL RIO, Texas (AP) - Three hours after being freed from a giant migrant camp under an international bridge, Mackenson Veillard stood outside a gas station and took stock of his sudden good fortune as he and his pregnant wife waited for a Greyhound bus to take them to a cousin in San Antonio.

The couple camped with thousands for a week under the bridge in Del Rio, Texas, sleeping on concrete and getting by on bread and bottled water.

Many Haitian migrants in Del Rio are being released in the United States, according to two U.S. officials, undercutting the Biden administration’s public statements that the thousands in the camp faced immediate expulsion to Haiti.

Haitians have been freed on a "very, very large scale" in recent days, one official said Tuesday. The official, who was not authorized to discuss the matter and thus spoke on condition of anonymity, put the figure in the thousands.

Many have been released with notices to appear at an immigration office within 60 days, an outcome that requires less processing time from Border Patrol agents than ordering an appearance in immigration court and points to the speed at which authorities are moving.

The releases come despite a massive effort to expel Haitians on flights under pandemic-related authority that denies migrants a chance to seek asylum. A third U.S. official not authorized to discuss operations said there were seven daily flights to Haiti planned starting Wednesday.

Ten flights arrived in Haiti from Sunday to Tuesday in planes designed for 135 passengers, according to Haitian officials, who didn’t provide a complete count but said six of those flights carried 713 migrants combined.

RELATED: US will fly 'massive' number of Haitian migrants to Haiti, official says

The camp held more than 14,000 people over the weekend, according to some estimates. Texas Gov. Greg Abbott, during a visit Tuesday to Del Rio, said the county’s top official told him the most recent tally was about 8,600 migrants. U.S. authorities have declined to say how many have been released in the U.S. in recent days.

The Homeland Security Department has been busing Haitians from Del Rio, a town of 35,000 people, to El Paso, Laredo and the Rio Grande Valley along the Texas border, and this week added flights to Tucson, Arizona, the official said. They are processed by the Border Patrol at those locations.

Criteria for deciding who is flown to Haiti and who is released in the U.S. are a mystery, but two officials said single adults were a priority. If previous handling of asylum-seekers is any guide, the administration is more likely to release those deemed vulnerable, including pregnant women, families with young children and those with medical issues.

Wilgens Jean and his wife, Junia Michel, waited in Del Rio this week for relatives to send the $439 in bus fare to get to Springfield, Ohio, where Jean’s brother lives. Michel, who is pregnant, huddled under the little shade the parking lot had to offer from the brutal heat. Her only request was for sunscreen that she softly rubbed on her pregnant belly. 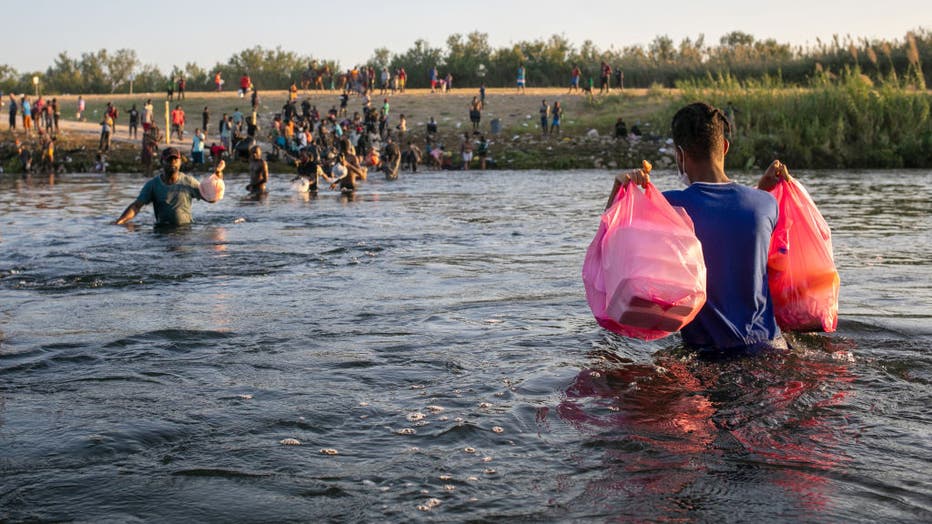 A Haitian immigrant carries meals across the Rio Grande into Del Rio, Texas on Sept. 20, 2021 in Ciudad Acuna, Mexico.(Photo by John Moore/Getty Images)

On the concrete in front of them lay two backpacks and a black garbage bag which held everything the couple owns. The pair left in Haiti in April and were in the Del Rio camp for five days. Jean said because his wife is expecting, they were released from the camp on Monday.

"I entered by crossing the river," Jean said. "Immigration gave me a ticket."

The system is a "black box," said Wade McMullen, an attorney with the Robert F. Kennedy Center for Justice and Human Rights, who was in Del Rio. "Right now, we have no official access to understand what processes are underway, what protections are being provided for the migrants."

Accounts of wide-scale releases — some observed at the Del Rio bus station by Associated Press journalists -- are at odds with statements Monday by Homeland Security Secretary Alejandro Mayorkas, who traveled to Del Rio to promise swift action.

"If you come to the United States illegally, you will be returned, your journey will not succeed, and you will be endangering your life and your family’s life," he said at a news conference.

Homeland Security, asked to comment on releases in the United States, said Wednesday that migrants who are not immediately expelled to Haiti may be detained or released with a notice to appear in immigration court or report to an immigration office, depending on available custody space.

"The Biden Administration has reiterated that our borders are not open, and people should not make the dangerous journey," the department said in a statement. "Individuals and families are subject to border restrictions, including expulsion."

Meanwhile, Mexico has begun busing and flying Haitian migrants away from the U.S. border, signaling a new level of support for the United States as the camp presented President Joe Biden with a humanitarian and increasingly political challenge.

The White House is facing sharp bipartisan condemnation. Republicans say Biden administration policies led Haitians to believe they would get asylum. Democrats are expressing outrage after images went viral this week of Border Patrol agents on horseback using aggressive tactics against the migrants.

Immigrants have described a screening process at the camp where individuals are given colored tickets for four categories: single men; single women; pregnant women; and families with young children, McMullen said. The vast majority of immigrants he and other advocates have interviewed and who have been released into the U.S. have been families with young children and pregnant women.

Video from a bridge in Del Rio, Texas shows thousands of Haitian migrants camping below. Credit: Michael Garofalo via Storyful

About 200 migrants were released on Monday in Del Rio. About 50 of them, mostly Haitian and many pregnant or with small children, boarded a bus to Houston, from where they would fly to destinations across the country. The Val Verde Border Humanitarian Coalition advocacy group arranged the charter bus and supplied sack lunches of a sandwich and cookies.

After an initial stay with family in San Antonio, Veillard eventually hopes to get to New York City to live with his sister. He will take any job he can find to support his growing family.

Veillard and his wife left Haiti four years ago and had been living in Brazil until they began their journey to the United States in June, much of it on foot.

"I don’t know how I’m going to feel tomorrow but now I feel lucky," he said.