LOS ANGELES - Los Angeles Mayor Eric Garcetti announced on Monday that the person suspected of starting a massive wildfire in Pacific Palisades was arrested over the weekend.

On Tuesday, the Los Angeles Police Department identified the suspect as Ramon Santos Rodriguez. The 48-year-old transient was booked on Sunday with arson charges and is being held on a $75,000 bail. 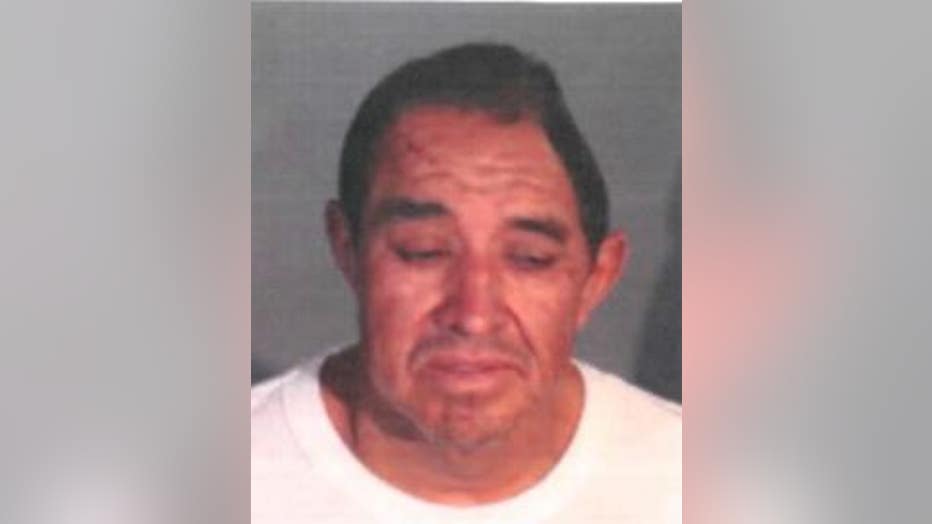 The fire, which broke out Saturday afternoon, burned roughly 1,202 acres before fire crews were able to reach full containment.

Weather conditions made it difficult to get a good size estimate Monday morning, as the low cloud cover made it impossible to fly tankers or spotter planes until later in the day. At this point, it looks like the fire is ensconced in narrow, deep canyons, not threatening any structures, officials said.

The Los Angeles Police Department has identified the arson suspect in connection to the massive wildfire that erupted in the Pacific Palisades. He was identified as Ramon Santos Rodriguez, 48, who police say is a transient.

Mandatory evacuation orders were in effect for about 500 homes off of Topanga Canyon before officials eventually lifted the order.

All evacuation orders in Topanga were lifted and Topanga Canyon Boulevard was reopened to residents at 6 p.m. Monday, according to the Los Angeles County Fire Department. Residents were asked to be prepared to show ID or a Topanga access card for entry.

Topanga Elementary Charter School, at 22075 Topanga School Road, reopened Wednesday after being closed due to air quality and safety concerns. Air-quality officials extended a smoke advisory through Wednesday afternoon due to large amounts of smoke billowing near homes in the area, and advised those who smell smoke or see ash to limit exposure by remaining indoors with windows and doors closed and avoiding vigorous physical activity.

No deaths or major injuries were reported. However, authorities said a firefighter sustained a minor eye injury.

Los Angeles County sheriff’s deputies are searching for the person suspected of starting a massive wildfire in Pacific Palisades on the afternoon of May 15.

Los Angeles Fire Department arson investigators and Los Angeles police had detained two people in connection with the fire, and one was questioned and released Saturday night. The other person was interviewed on Sunday and was then arrested, LAFD Chief Ralph Terrazas said at Monday morning briefing.

The man who was detained and released Saturday night had his photo published by the Citizen personal safety app along with a $30,000 reward offer for the suspect's arrest, but it turns out he was not the suspect police were looking for.

When the man identified on the app was detained by Los Angeles County sheriff's officials Saturday, it was determined that he was not the person who started the fire, authorities said.

A Citizen app spokesperson told FOX 11, "Once we realized this error, we immediately retracted the photo and reward offer. We are actively working to improve our internal processes."

While thanking firefighters during a press conference on Monday, City Councilmember Mike Bonin was met with "Recall Bonin!" cheers from the crowd, which made safety measures difficult to hear.

During a press conference Monday about a fire burning in the Pacific Palisades, a crowd booed and called for a recall of Los Angeles city councilmember Mike Bonin. 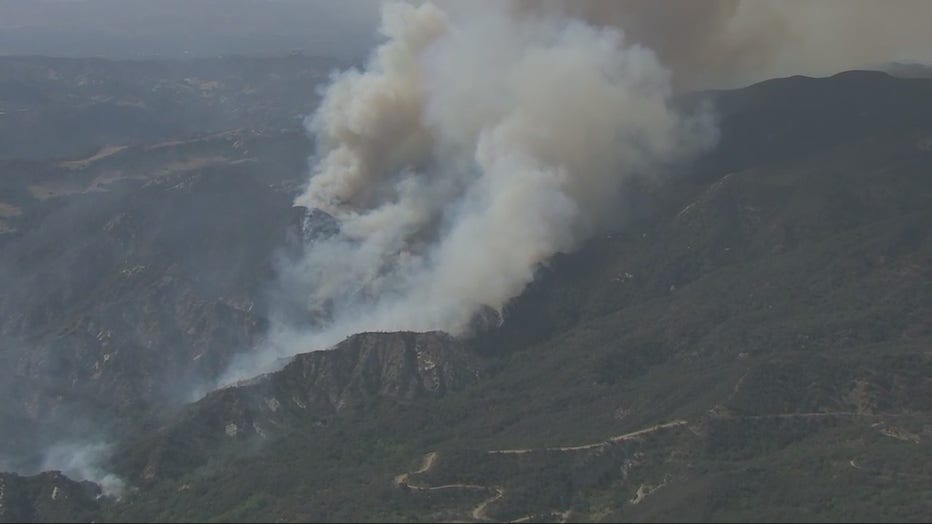 Residents were asked to prepare for a potential evacuation based on the developing fire activity, which includes securing all valuables and medicines in your car and being prepared if asked to evacaute.

Fire officials said that large animal evacuations could be brought to Pierce College at 6201 Winnetka Ave. in Woodland Hills.

Small animals were asked to be taken to Agoura Hills LA County Animal Shelter at 29525 Agoura Rd. in Agoura Hills. 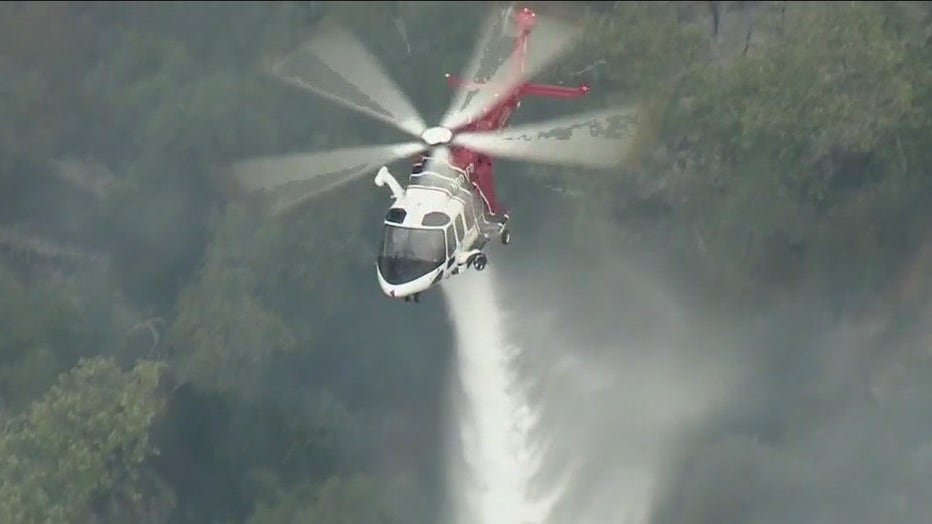 "Dozers are working to improve access for firefighters on the ground but much of the area remains inaccessible," she said. "This is primarily an air-based operation with both fixed-wing and rotary working together."

"The state parks are closing trails in the area because it is unsafe for hikers but cannot clear everyone due to the vast area involved," Stewart said. 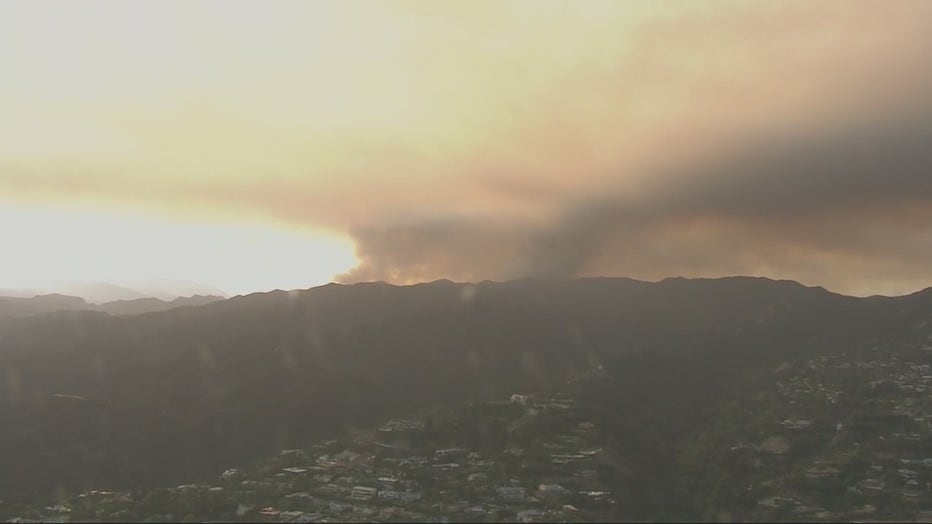 The fire ignited in a remote area off Michael Lane and Palisades Court around 10 p.m. Friday, according to Los Angeles Fire Department spokesman Nicholas Prange.

"By 6:30 a.m. on Saturday ... fire was estimated at 15 acres," Terrazas said. "Unfortunately, by 4:30 p.m., an additional burn area emerged north of the original fire. Within about one hour, the fire grew to 750 acres. By 1 p.m. (Sunday) ... the fire was estimated at 1,325 acres with zero percent containment. We do anticipate being on scene for the next several days until we achieve 100 percent containment."

About 450 firefighters were assigned to battle the flames. They were being aided by multiple water-dropping helicopters and three fixed-wing retardant-dropping aircraft, which were put into service when weather conditions improved for flying Monday afternoon.

Topanga Canyon Boulevard was closed in both directions to all but residents between Mulholland Drive and Pacific Coast Highway. The right lane of southbound PCH was also closed between Temescal Canyon Road and Chataqua Boulevard.