Man who climbed LA hotel explains why he did it

Maison Deschamps was seen Tuesday morning free climbing the Ritz-Carlton hotel in downtown LA. He talked to FOX 11's Hailey Winslow about why he did it.

LOS ANGELES - He calls himself Pro-Life Spiderman. Maison Deschamps has been seen free climbing numerous high rises across the US.

On Tuesday, he climbed the Ritz-Carlton hotel in downtown Los Angeles in order to raise money and bring awareness about a cause close to his heart.

The 22-year-old climbed up 54 floors, with climbing chalk but no rope. Deschamps is pro-life and left a sign on the side of the hotel saying "Support Women, not Abortions".

A ground witness captured the moment a man scaled the Ritz-Carlton hotel in downtown LA.

"Today we're raising money for a mom named Olivia, to save her baby from abortion," Deschamps said in an Instagram post.

This isn't his first climb...Deschamps has climbed six other buildings in the US.

"The rope would make it harder," he explained to FOX 11. "I'm puking beforehand because I don't like to get yelled at and I know that security is going to be mad and try to get me in trouble."

Once Deschamps reached the top, he was greeted by authorities and immediately taken into custody. 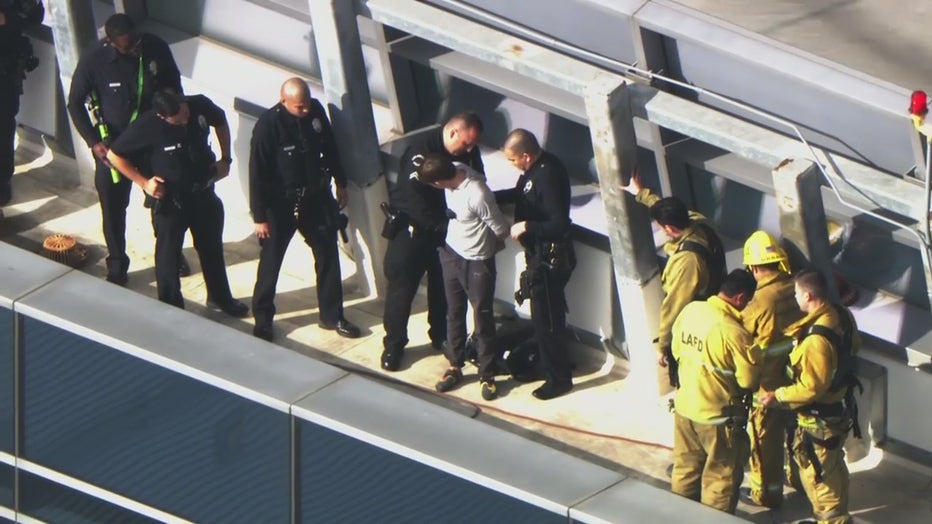 The organization he is raising money and awareness for is "Let Them Live".