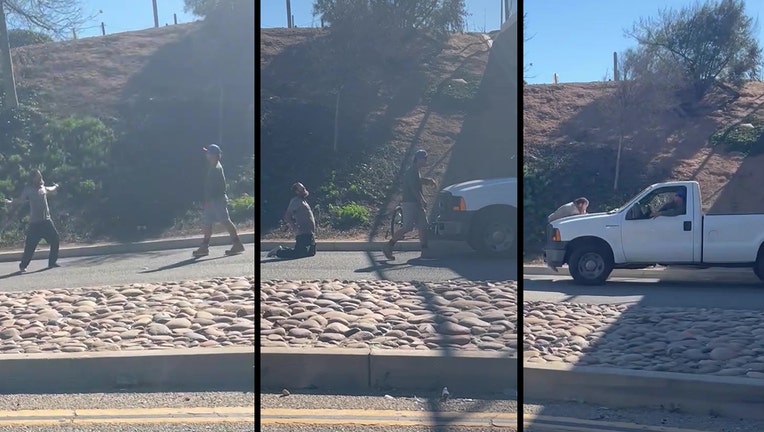 JURUPA VALLEY, Calif. - A man blocking traffic and refusing to move was struck by a vehicle in Jurupa Valley; the incident was caught on video.

The altercation occurred Jan. 20 around 12:40 p.m. near the intersection of Limonite Avenue and Van Buren Boulevard.

According to deputies from the Jurupa Valley Sheriff’s Station, a man was standing in the roadway blocking traffic. The driver of a white 2007 Ford F350 stopped his vehicle to avoid striking the man.

At that time an altercation occurred between the two.

Man struck by vehicle during altercation

A man refusing to get out of a roadway was struck by a vehicle after an unusual altercation with a driver in Jurupa Valley.

In the video, you can hear the man, who was blocking traffic, shout "I love you, I love her." He then got down on his knees as the driver shouts "Ok, go ahead." At that moment the driver got back into his car and struck the man with his vehicle and fled.

Deputies say the victim suffered minor injuries. It is unknown if the two men knew each other.

Anyone with information is urged to contact Deputy Limen at the Jurupa Valley Station at 951-955-2600.