IOWA CITY, Iowa - A 20-year-old college student charged with killing his parents and younger sister in their family home in Iowa told police that a masked intruder was to blame for the shooting deaths, according to a criminal complaint released Wednesday.

Alex Jackson called 911 on Tuesday morning to report that he and his dad had been shot by a male intruder at their Cedar Rapids home, the complaint says.

Officers who responded found 61-year-old Jan Jackson, 68-year-old Melissa Jackson and 19-year-old Sabrina Jackson dead from gunshot wounds in different rooms of the home. They found Alex Jackson suffering from a gunshot wound to his foot, and recovered a .22 caliber semi-automatic rifle that is believed to have been the firearm used in the shootings.

Alex Jackson told police that he woke up to the sound of gunfire and was shot during a struggle with a masked man over the rifle, which he claimed he and his father had left on the fireplace after cleaning it the previous night, the complaint says.

Investigators found no sign of forced entry or burglary at the home, according to the complaint signed by Linn County Attorney Jerry Vander Sanden. Alex Jackson denied shooting his family members but admitted that his father had recently told him he needed to find a job or move out of the home, the complaint says. 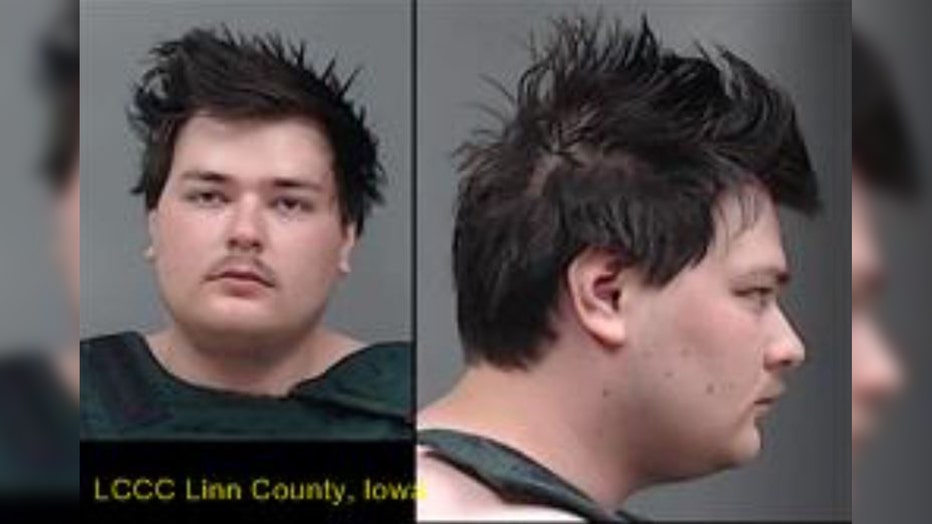 Jackson was treated for his wounded foot at a hospital before he was booked on three counts of first-degree murder late Tuesday at the Linn County jail. He made a brief initial court appearance Wednesday morning and was ordered jailed on a $3 million bond.

A public defender representing him, Lindsay Garner, said he would plead not guilty after a formal charging document is filed.

The case marks the first known triple homicide in Cedar Rapids since 1982 and only the second since at least 1959, according to Cedar Rapids Police Department spokesman Greg Buelow, who searched the agency’s archives Wednesday.

The audio of Jackson’s 911 call cannot be released because it contains information of "material importance to our investigation," Buelow said.

The slayings shocked acquaintances of the Jackson family, who had lived in the home on Oak Leaf Court in a quiet suburban neighborhood for a decade. Friends planned a candlelight vigil to remember Sabrina and her parents for Wednesday evening at Kennedy High School in Cedar Rapids, where she and her brother attended.

Alex and Sabrina Jackson were students at the University of Iowa studying in the College of Liberal Arts and Sciences, according to the school's online directory. The university is located in Iowa City, about 35 miles south of their home.

"Our thoughts are with all those impacted by this tragic situation," said university spokeswoman Anne Bassett, who said counseling and other services were available for students and employees.

Alex Jackson graduated from Kennedy High in 2019, a year before his sister graduated, according to a spokeswoman for the Cedar Rapids school district. He played the flute and his sister played the oboe in the school's symphony band in 2019.

Alex Jackson became an Eagle Scout in 2017 after working with the Save Cedar Rapids Heritage organization on a project to fix up a historic home. He spent hours painting the walls and ceiling of the home, originally built in the late 1800s, so that low-income families could move in, according to Boy Scouts of America Troop 766.

Alex Jackson had no prior criminal record in Iowa, not an even a speeding ticket, according to a search of the state’s online court database. His parents and sister also had no record of legal troubles in Iowa. Before moving to Cedar Rapids in 2011, the family had previously lived in Oregon.

Alex Jackson was on suicide watch Wednesday in accordance with the jail’s practice for new inmates charged with crimes that could lead to life imprisonment, Sheriff Brian Gardner said. If convicted of first-degree murder, he would not be eligible for parole.