Thousands of runners are expected to take part in Sunday's marathon, which will follow a route from Dodger Stadium to Century City. Last year's marathon was delayed due to the pandemic, but this year's event is returning to its more traditional March running. 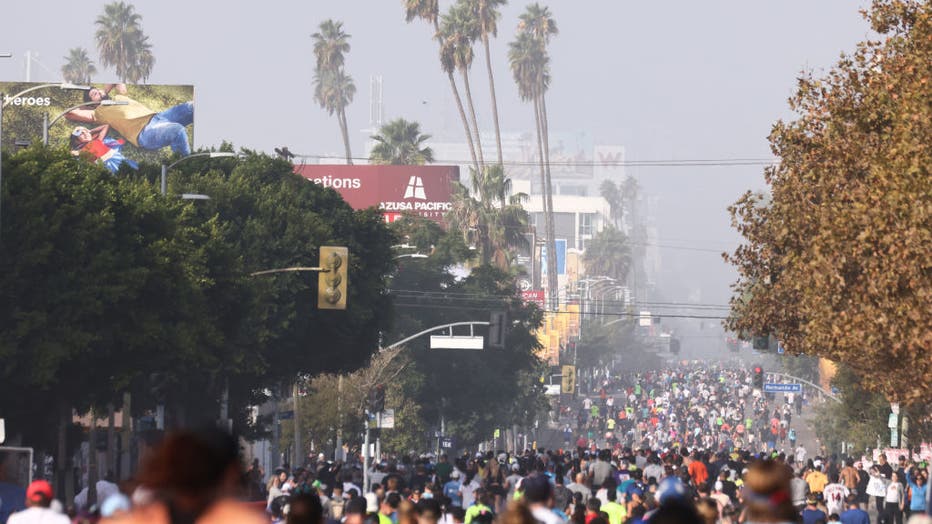 LOS ANGELES, CALIFORNIA - NOVEMBER 07: (Editorial Use Only) Participants run along Hollywood Boulevard during the pandemic-delayed 36th annual Los Angeles Marathon on November 7, 2021 in Los Angeles, California. The marathon, with a reduced field thi

"I hope a lot of people have an opportunity to go out and cheer on our runners," Barbara Ferrer told reporters during an online briefing Thursday. "I want to commend the organizers of the marathon, as always they're attentive to really what we consider routine infection-control processes. We encourage people to try to distance as much as possible and if they're indoors gathering before the run with lots of people, to keep those masks on.

"Obviously for the spectators, we'll all be outside watching. We can do our best to keep our distance. If you feel like you're in a crowded area and you're a person particularly at higher risk or you live with people at higher risk or you're unvaccinated in those crowded situations, we obviously continue to recommend that you keep a mask on."

Thousands of runners are expected to take part in Sunday's marathon, which will follow a route from Dodger Stadium to Century City. Last year's marathon was delayed due to the pandemic, but this year's event is returning to its more traditional March running.

Ferrer noted that there is no COVID vaccination requirement to take part in or watch the marathon, so she urged people attending or participating to "assess your own risk and take as many protective measures as appropriate."

Another 1,331 new infections were confirmed, giving the county a cumulative total from throughout the pandemic of 2,817,190.

According to state figures, there were a total of 495 COVID-positive patients in county hospitals as of Thursday, down from the 499 reported on Wednesday. Of those patients, 85 were being treated in intensive care units, down from 90 the previous day.

The rolling average daily rate of people testing positive for the virus was 0.7% as of Thursday, roughly the same as it has been throughout the week.

Ferrer said health officials are closely monitoring spread of the BA.2 strain of COVID-19, a mutation of the Omicron variant. BA.2 has been spreading rapidly in some countries, and Ferrer noted that she would not be surprised if it became a more dominant strain locally.