March 15 will mark one year since Amy Watson, a preschool teacher from Oregon, first began suffering with COVID-19 symptoms, and she still has a fever. "Today is 353," said Watson on March 3.

A British historian, an Italian archaeologist and an American preschool teacher have never met in person, but they share a prominent pandemic bond.

Plagued by eerily similar symptoms, the three women are credited with describing, naming and helping bring long COVID into the public’s consciousness in early 2020.

Rachel Pope, of Liverpool, took to Twitter in late March 2020 to describe her bedeviling symptoms, then unnamed, after a coronavirus infection. Elisa Perego in Italy first used the term "long COVID," in a May tweet that year. Amy Watson in Portland, Oregon, got inspiration in naming her Facebook support group from the trucker cap she’d been wearing, and "long hauler" soon became part of the pandemic lexicon.

Nearly three years into the pandemic, scientists are still trying to figure out why some people get long COVID and why a small portion — including the three women — have lasting symptoms.

Millions of people worldwide have had long COVID, reporting various symptoms including fatigue, lung problems, and brain fog and other neurological symptoms. Evidence suggests most recover substantially within a year, but recent data show that it has contributed to more than 3,500 U.S. deaths.

Here’s some of the latest evidence:

Many studies and anecdotal evidence suggest that women are more likely than men to develop long COVID.

There could be biological reasons.

Women are also much more likely than men to have autoimmune diseases, where the body mistakenly attacks its own healthy cells. Some scientists believe long COVID could result from an autoimmune response triggered by the virus.

Women’s bodies also tend to have more fat tissue and emerging research suggests the coronavirus may hide in fat after infection. Scientists also are studying whether women’s fluctuating hormone levels may increase the risks.

Another possible factor: Women are more likely than men to seek health care and often more attuned to changes in their bodies, Klein noted.

"I don’t think we should ignore that," she said. Biology and behavior are probably both at play, Klein said.

It may thus be no coincidence that it was three women who helped shine the first light on long COVID.

Pope, 46, started chronicling what she was experiencing in March 2020: flu-like symptoms, then her lungs, heart and joints were affected. After a month she started having some "OK" days, but symptoms persisted.

She and some similarly ill colleagues connected with Perego on Twitter. "We started sort of coming together because it was literally the only place where we could do that," Pope said. "In 2020, we would joke that we’d get together for Christmas and have a party," Pope said. "Then obviously it went on, and I think we stopped joking."

Watson started her virtual long haulers group that April. The others soon learned of that nickname and embraced it.

Several studies suggest the ubiquitous Epstein-Barr virus could play a role in some cases of long COVID.

Inflammation caused by coronavirus infection can activate herpes viruses, which remain in the body after causing an acute infection, said Dr. Timothy Henrich, a virus expert at the University of California, San Francisco.

Epstein-Barr virus is among the most common of these herpes viruses: An estimated 90% of the U.S. population has been infected with it. The virus can cause mononucleosis or symptoms that may be dismissed as a cold.

Henrich is among researchers who have found immune markers signaling Epstein-Barr reactivation in the blood of long COVID patients, particularly those with fatigue.

Not all long COVID patients have these markers. But it’s possible that Epstein-Barr is causing symptoms in those who do, although scientists say more study is needed.

Some scientists also believe that Epstein-Barr triggers chronic fatigue syndrome, a condition that bears many similarities to long COVID, but that also is unproven.

Obesity is a risk factor for severe COVID-19 infections and scientists are trying to understand why.

Stanford University researchers are among those who have found evidence that the coronavirus can infect fat cells. In a recent study, they found the virus and signs of inflammation in fat tissue taken from people who had died from COVID.

Lab tests showed that the virus can reproduce in fat tissue. That raises the possibility that fat tissue could serve as a "reservoir," potentially fueling long COVID.

Could removing fat tissue treat or prevent some cases of long COVID? It’s a tantalizing question, but the research is preliminary, said Dr. Catherine Blish, a Stanford infectious diseases professor and a senior author of the study.

Scientists at the University of Texas Southwestern Medical Center are studying leptin, a hormone produced by fat cells that can influence the body’s immune response and promote inflammation.

They plan to study whether injections of a manufactured antibody could reduce leptin levels — and in turn inflammation from coronavirus infections or long COVID.

"We have a good scientific basis together with some preliminary data to argue that we might be on the right track," said Dr. Philipp Scherer. 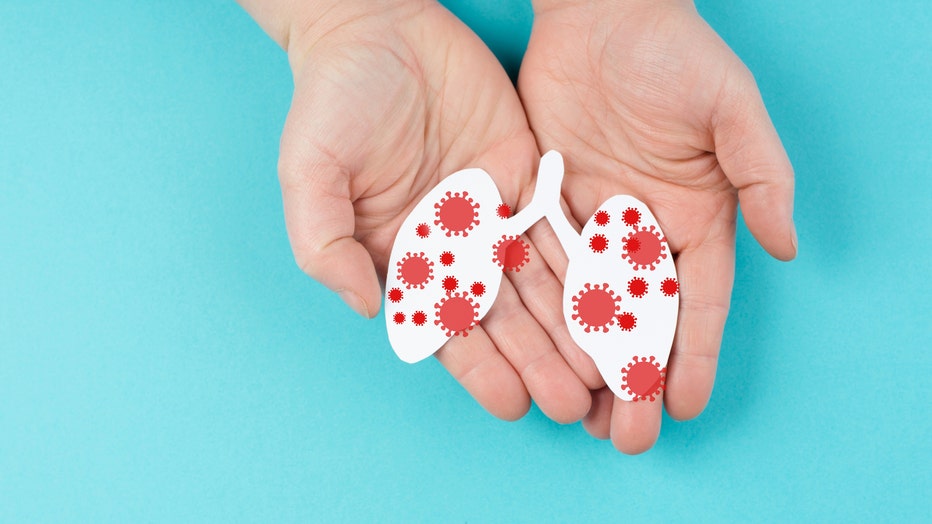 Creative stock image of lungs with virus. via Getty Images

It has been estimated that about 30% of people infected with the coronavirus will develop long COVID, based on data from earlier in the pandemic.

Most people who have lingering, recurrent or new symptoms after infection will recover after about three months. Among those with symptoms at three months, about 15% will continue to have symptoms for at least nine more months, according to a recent study in the Journal of the American Medical Association.

Figuring out who’s at risk for years-long symptoms "is such a complicated question," said Dr. Lawrence Purpura, an infectious disease expert at Columbia University.

"The majority of patients will eventually recover," he said. "It’s important for people to know that."

It's small consolation for the three women who helped the world recognize long COVID.

She knows that scientists have learned a lot in a short time, but she says "there is a gap" between long COVID research and medical care.

"We need to translate scientific knowledge into better treatment and policy," she said.

Watson, approaching 50, says she has "never had any kind of recovery." She has had severe migraines, plus digestive, nerve and foot problems. Recently she developed severe anemia.

She wishes the medical community had a more organized approach to treating long COVID. Doctors say not knowing the underlying cause or causes makes that difficult.

"I just want my life back," Watson said, "and it’s not looking like that’s all that possible."

The Associated Press Health and Science Department receives support from the Howard Hughes Medical Institute’s Science and Educational Media Group. The AP is solely responsible for all content.