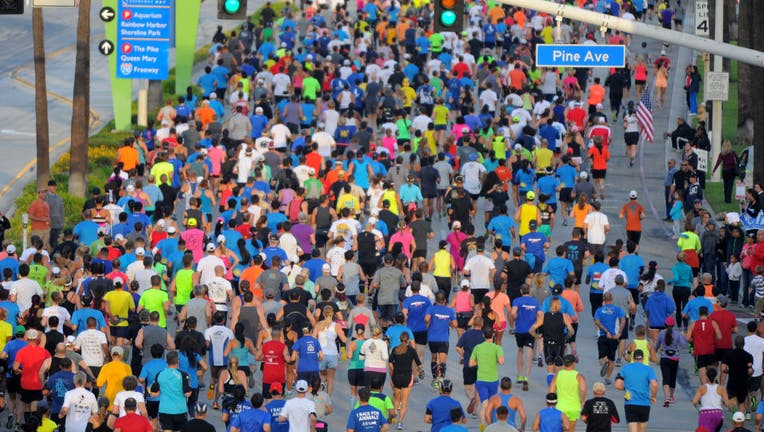 LONG BEACH, Calif. - A capacity field of 2,700 runners competed in Sunday's 38th annual Long Beach Marathon, including 17 who have completed in all 37 previous editions of the race.

Ornelas attends Long Beach State. He was born in Corona and graduated from Eleanor Roosevelt High School in Eastvale.

A 13.1-mile half-marathon and a 20-mile bicycle tour was also held in connection with the marathon. The half-marathon also sold out, with 9,000 runners entered, Cruz said.

SUGGESTED: Draymond Green taking time away from the Warriors after punch

The bicycle tour was held on the marathon course, conducted in the opposite direction and starting at the same time, 6 a.m.

Runners from 44 states and 21 nations entered the races, Cruz said. The fields were 51% male and 49% female, with just over 20% of the runners running their first marathon or half-marathon, Cruz said.

The 26-mile, 385-yard marathon course started on Shoreline Drive. Runners then passed through The Pike at Rainbow Harbor retail and entertainment center, ran on an on-ramp to the Long Beach (710) Freeway, and crossed the Queensway Bridge to the bow of the Queen Mary.

The field looped around the Lighthouse at Rainbow Harbor, headed to Pierpoint Landing, then back through the start/finish area.

The sixth through 10th miles were run a few feet from the Pacific Ocean. The course then went through the Belmont Shore neighborhood, passed Marine Stadium and around Colorado Lagoon, passing the Long Beach Recreation Golf Course.

The 16th through 20th miles were a 5-kilometer loop through Cal State Long Beach. The field then ran on Ocean Boulevard to the finish line on Shoreline Drive.

For the first time, the Long Beach Marathon was part of the Golden State Challenge, where a runner completing a race of 5 kilometers or more at four separate events in a year receives a medal.

The Long Beach Marathon was first held in 1982. The race was disbanded in 1996 because of financial problems, then revived in 1999 under new management.