Police in Long Beach received calls about two burglaries and one attempted burglary all within hours of each other Friday night.

LONG BEACH, Calif. - Long Beach police Saturday were investigating two home burglaries and another attempted burglary in one night in the eastern and northern parts of the city.

At about 8:20 p.m. Friday, officers responded to the 5500 block of El Jardin Street in East Long Beach, police officials said on Twitter. A woman reported that she saw three male suspects in her backyard who fled before officers arrived and did not break into the home.

Then at 9:41 p.m., officers responded to the 5600 block of El Parque Street, also in East Long Beach, where a burglary had occurred within the past half hour. The suspects smashed a sliding door, entered the home and stole jewelry, police said. 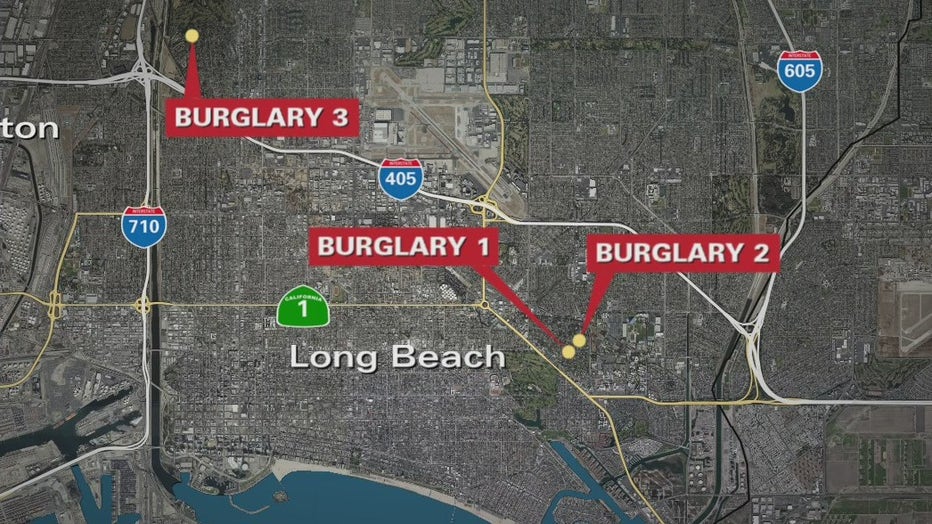 Then at 9:52 p.m., officers responded to the 4200 block of Country Club Drive in North Long Beach where suspects pried open a door to get into a house and steal jewelry.

Officers were working with the burglary detail on the investigation and high visibility patrols were promised for Saturday night.

The LBPD offered safety tips for residents that included good locks, burglar alarms and home surveillance systems and watching out for suspicious people knocking on doors.

Residents were reminded to call 911 for emergencies and 562-435-6711 to report suspicious activity at their home or in their neighborhood.