Getaway Tuesday turned into a bigger nightmare for those heading to LAX in the evening. A planned labor demonstration at the airport made the travel crunch even worse.

Across the nation on Tuesday, caterers with LSG Sky Chefs and its subsidiary Gate Gourmet, which contracts with American Airlines and other carriers, will stage protests calling for higher wages and improved health-care options.

Protesters plan to gather at 5 p.m. at 98th Street and Airport Boulevard, and other airport workers will stage demonstrations at LAX terminals. The two groups will then meet for a program at Century and Sepulveda boulevards.

According to the Unite Here union, the event could be the largest demonstration of workers at U.S. airports in years, with hundreds possibly taking part at LAX.

Heath Montgomery, a spokesman for LAX, said the airport is working closely with its Airport Police Department as well as the Los Angeles Police Department to monitor the situation and prevent major delays for travelers.

"Of course, we're very concerned at the start of the holiday season," Montgomery said. "We're expecting this to be a record travel season. Tuesday and Wednesday are going to be the busiest days with some 240,000 people trying to move in and out of the facility. To have a disruption is certainly concerning."

Montgomery said people traveling between noon and 8 p.m. Tuesday should be aware that the labor demonstration could cause some disruptions and possible temporary street closures.

"The thing to understand is that this is a national demonstration, affecting a lot of airports at a very inopportune time," Montgomery said. 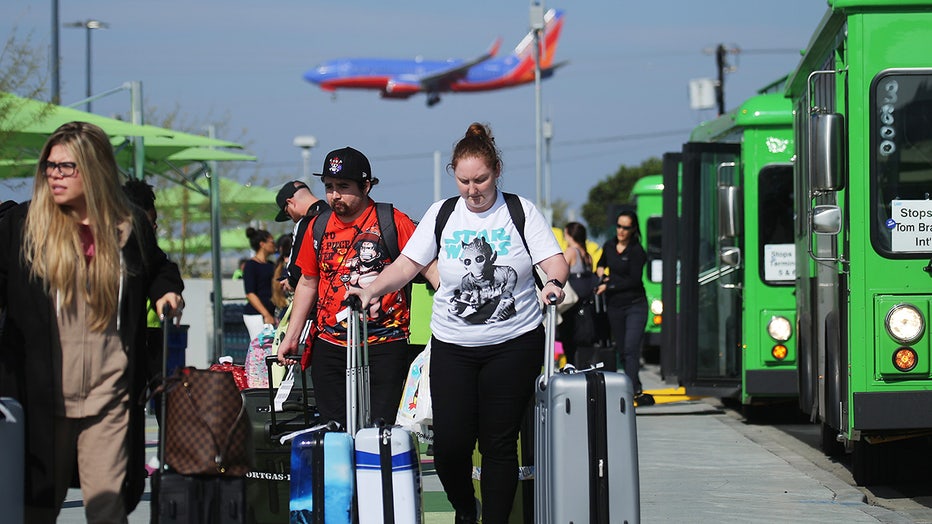 Arriving passengers walk with their luggage as they prepare to board vehicles at the new 'LAX-it' ride-hail passenger pickup lot at LAX. (Mario Tama/Getty Images)

Other cities expected to be affected by the protests include New York City, Chicago, San Francisco, Miami, Dallas and Philadelphia.

According to Unite Here, one in four workers with LSG Sky Chefs and Gate Gourmet earn less than $12 per hour, including people who have worked for them for more than a decade. The union also contends that 33% of workers at LSG Sky Chefs at LAX had company healthcare in 2018, and 10% of that insurance covered dependents.

American Airlines also provided a statement saying the carrier is "confident" in the negotiations, but it ultimately has no control over the labor talks.

The labor demonstration is planned ahead of rain, snow and unusually cold temperatures forecaster for Southern California this week. The weather conditions could make for a soggy Thanksgiving and present a challenge for those planning to drive or fly for the holiday weekend.

A planned labor protest is planned at Los Angeles International Airport on one of the busiest travel days of the year.

The National Weather Service warned Sunday of a major storm expected to hit the area Wednesday and last through Friday.

Although the rain isn't expected to arrive until Wednesday, expected tidal overflow has prompted officials to issue a coastal flood advisory in the Southland from 6 a.m. Monday to 10 a.m. Tuesday.

Strong winds and slightly cooler temperatures are expected Monday. A high wind warning is in effect until 3 a.m. Tuesday for northwest winds across the mountains and the Antelope Valley. Gusts could get as high as 60 mph, according to the NWS.