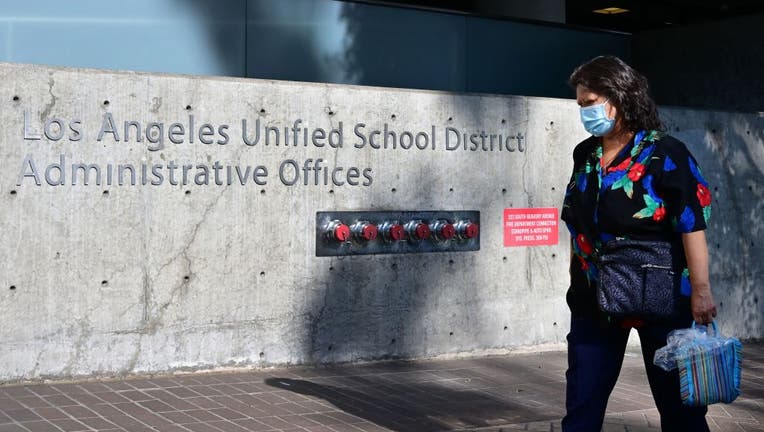 A pedestrian walks past the headquarters of the Los Angeles Unified School District on October 3, 2022 in Los Angeles, California. (Photo by Frederic J. BROWN / AFP) (Photo by FREDERIC J. BROWN/AFP via Getty Images)

A judge has pared a consolidated lawsuit brought against Los Angeles Unified on behalf of multiple girls who allege they were molested by a former teacher's assistant at a North Hollywood elementary school in 2019.

The plaintiffs are identified only as Jane Does in the Los Angeles Superior Court case. On Tuesday, Judge Barbara M. Scheper denied an LAUSD motion to dismiss the entire case, but did toss the sexual battery claim involving some of the girls, rejecting their attorneys' arguments that the district ratified and authorized Lino Cabrera's alleged sexual abuse of the girls by not suspending or firing him.

LAUSD attorneys maintained there is no law enabling someone to hold a public entity liable on a ratification or authorization theory regarding the sexual battery claim.

However, the judge allowed the negligence cause of action to remain part of the case, finding that there is a triable issue whether the LAUSD violated its obligation to protect the girls from a foreseeable risk of sexual abuse by Cabrera. Trial of the suit is scheduled next April 10.

Most of the alleged abuses took place in 2019. Cabrera worked in a computer lab at Oxnard Street Elementary School.

"While Cabrera sexually abused, sexually molested and sexually harassed ... (the) LAUSD ... had knowledge or reason to know that Cabrera took an unusual interest and spent an inordinate amount of time with each plaintiff," the court papers of the original three plaintiffs allege.

Those plaintiffs further allege that the LAUSD "failed to report and did hide and conceal from students, parents, teachers, law enforcement authorities, civil authorities and/or others the true facts and relevant information necessary to bring Cabrera to justice."

Cabrera had a practice of isolating minors at the school was also known to many teachers and administrators at Oxnard Elementary who, despite knowing his conduct violated the school and district's policies for the protection of minors, took either ineffective or no action to prevent his alleged sexual abuses of the girls, according to the court papers filed on behalf of other girls in the case.

Cabrera, of San Fernando, was 28 years old when he was sentenced in February 2020 in Van Nuys Superior Court to eight years in prison for sexually abusing six female students. He pleaded no contest a month before to one felony count each of continuous sexual abuse and committing a lewd act on a child under 14, along with four misdemeanor counts of child molestation, in exchange for the negotiated sentence. He will also be required to register as a sex offender for life.

Allegations of inappropriate behavior by Cabrera arose May 16, 2019, and an investigation by the Los Angeles Police Department's Sexually Exploited Child Unit ensued, according to the LAPD.