We all know it's incredibly expensive to live in Los Angeles. LAPD introduced a "Housing for Hires," offering rent contribution to police recruits.

LOS ANGELES - Andy Huynh and his girlfriend check out the custom kitchen in what could be his new apartment if he's hired by the Los Angeles Police Department.  A new hiring incentive program called Housing For Hires could knock $1,000 off of his monthly rent.

Huynh wants to be an officer and is a candidate undergoing background checks. He got a tour of a Park La Brea apartment in the Fairfax district across from The Grove shopping complex. Park La Brea is among a handful of properties working with the new Housing for Hires program.

It has the LAPD Foundation, through private donation, contributing up to $1,000 toward the rent for recruits.

The idea came from developer and businessman Steve Soboroff. For the property owners, he says, "who doesn't want to have a cop live in their apartment?"

Soboroff is also an LAPD Commissioner and says Housing For Hires is needed to address a shortage of LAPD officers. "We can't hire enough," Soboroff said. He wants to double the number of officers in current academy classes, "without lowering quality," he emphasizes. 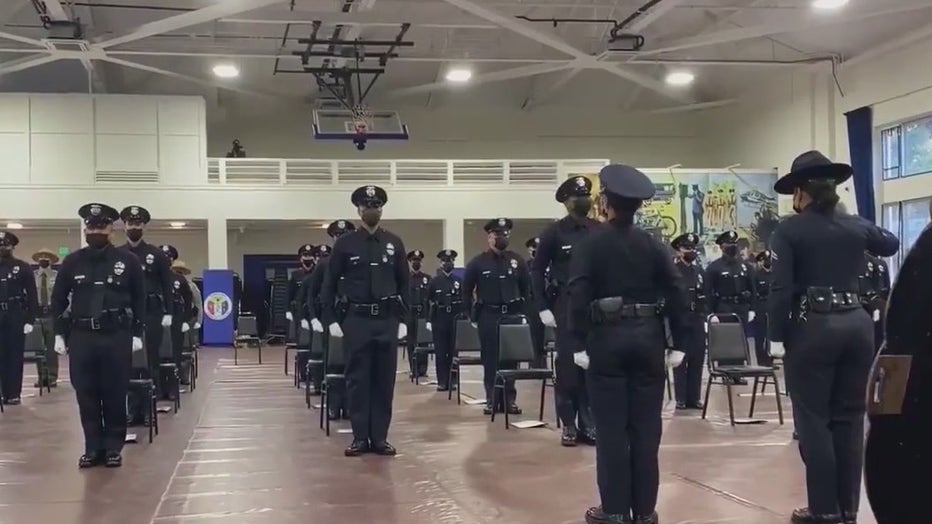 LAPD Chief Michel Moore says the shortage of officers is a nationwide problem. He says Housing For Hires is a first for the LAPD and among the first of its kind in the nation.

Housing For Hires launched six months ago and now has about 10 apartments and single-family residences from South Los Angeles to Downtown LA through the Fairfax district to the valley. Downtown LA properties include the Medici Apartments billing itself as a resort community and Skyline Terrace with skyline views. Park La Brea across from The Grove has spectacular hi-rise views of the Hollywood Sign and into West Hollywood.

The key, says Captain Aaron McCraney of LAPD's Employment & Recruitment Division, is that it has recruits living in the city of Los Angeles.

Under Housing for Hires, if a unit rents at $2,500 a month, the recruit pays up to $1,500. The LAPD Foundation pays the other $1,000. McCraney says it's a two-year plan that gets a recruit through the academy, past probation, and into their first LAPD assignment.

Chief Moore is looking to hire 700 police officers to get back to pre-pandemic numbers. He says the LAPD foundation has about 2 million in philanthropic donations going toward the Housing for Hires program.

After 2020, calls to defund the police and rising crime, Soboroff says this message to potential officers matters.

"The message is we care," he said.

He added the LAPD gets a lot of interest, including from out of state, but people can't afford to live here.

Hunyh lives in Gardena at home with his parents. He says living in the city of Los Angeles would save a half hour off of his drive time to the LAPD Academy.

The 25-year-old currently works in retail. He says he wants to become a police officer because he and his significant others have been victims of crime. "I really hate seeing that, and I want to be able to help them."