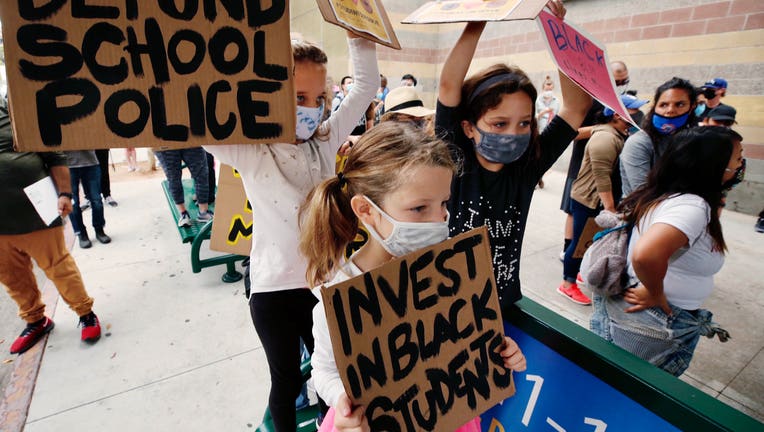 LOS ANGELES - The Los Angeles Board of Education has approved an immediate 35% cut to its school police force, a reduction of $25 million, in response to weeks of protests by student activists and community groups who had called for the elimination of the department.

The board action on Tuesday also calls for officers to give up their uniforms and patrol off campus, and will lead to the layoffs of 65 officers in the 471-employee department. The money saved will be allocated to fund staff to specifically serve the needs of Black students and a task force that will study ways to re-imagine the issue of student and campus safety.

On Wednesday, School Police Chief Todd Chamberlain announced his resignation from the department.

Chamberlain released a statement saying "After humbly serving my communities, department and personnel over 35 years in Law-Enforcement, I have been placed in a position that makes my ability to effectively, professionally and safely impact those groups unachievable. In good conscience, and in fear for safety and well-being of those I serve, I cannot support modifications to my position, the organization and most importantly, the community (students, staff and families) that I believe will be detrimental and potentially life-threatening.”

"L.A. Unified has to continue to be a leader in showing what can happen when we believe in self-determination, when we empower communities to help this organization transform itself,'' board member Monica Garcia said.

Goldberg's chief of staff, Sharon Delugach, said Tuesday night that the resolution also would require officers to be unarmed and would prohibit the
use of pepper spray. However, those provisions were not in the resolution read
aloud to the board.

The portion of Garcia's language that was preserved said the money saved would go to "support African American student achievement to the extent
of the law.'' And until safety alternatives are worked out, all schools would
have access "to appropriate community support in the event of an emergency.''

Just before the vote, Garcia added an amendment that would bar the school district from replacing the school police by contracting with the Los Angeles police, the county sheriff's department or a private security force.

The vote to reduce the police force came at the end of a 13-hour meeting that started with public comments over the issue, which has roiled the school district since June 8, when leaders of the teacher's union joined with activists and called for the elimination of the police department.

"The school board's action is a huge first step in the campaign for police-free schools and ground-breaking in terms of our movement for supporting Black lives in our schools,'' UTLA President Cecily Myart-Cruz said Wednesday,
her first day on the job after taking over for former president Alex Caputo-
Pearl.

"It was the power and passion in the streets across L.A. and this country, uplifting the voices of Black students, educators and families that made this happen. We can't let up. We must keep fighting for our babies and our students.''

The California Charter Schools Association said the board had taken "meaningful action to move our public school system forward by investing in
resources, services, and supports that both create safe school campuses and
also promote the well-being and learning of every child.''