Allegations of cronyism at some of the highest levels of the LA County government. At the center of it a rarely used sexual harassment hotline costing taxpayers thousands of dollars per call!

LOS ANGELES - A months-long FOX 11 investigation has revealed that an L.A. Metro sexual harassment hotline operated by a local charity is currently costing taxpayers more than $8,000 per call after a series of no-bid contracts to operate the hotline were awarded to the best friend and campaign donor of L.A. County Supervisor & Metro board member Sheila Kuehl after her office privately pushed for Metro to hire the charity. 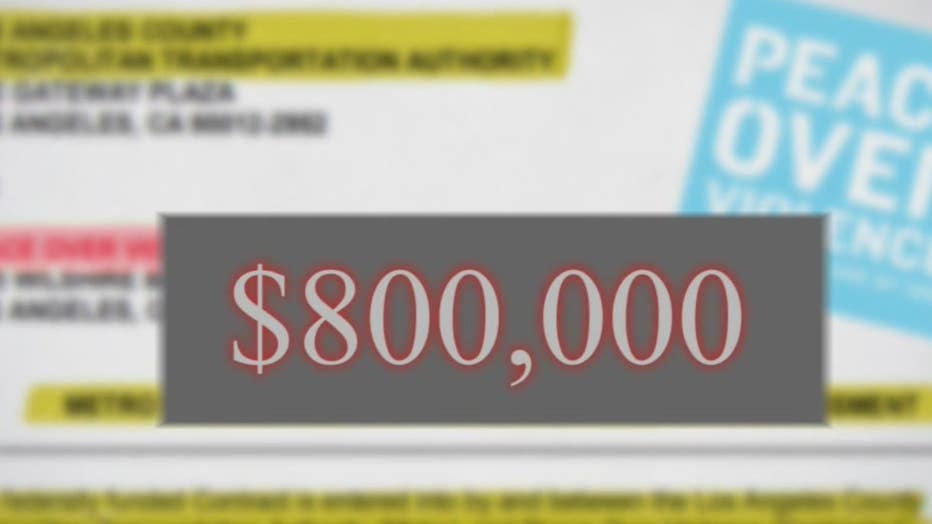 The “Off Limits” hotline was created in 2017 and sold to the public as a game-changer, a 24/7 hotline to fight sexual harassment on L.A. Metro’s systems, while behind closed doors, a series of lucrative no-bid contracts were awarded to L.A. based charity Peace Over Violence to run the hotline for more than $800,000.

Now, a Metro whistleblower has come forward to FOX 11 to pull back the curtain on how the hotline came to be and to expose what she says is political backscratching at the expense of taxpayers.

“it was costing taxpayers anywhere from three to eight thousand dollars per call,” said Jennifer Loew.

“They wanted to hide it from you as taxpayers in L.A. County, and I’m here to expose it.”

Loew currently works at Metro as a transit security special project manager. One of the projects she was put in charge of was the ‘Off Limits” hotline, which she says has been a failure since its inception.

“For the first few years of the contract, the hotline, which was 24 hours a day, 7 days a week, only received on average about one call a day, some of those were hang-ups, so that’s really low call volume.”

FOX 11 submitted a series of records requests and poured over the call logs Metro and Peace Over Violence report to the public for the “Off Limits” hotline, which appears to show more than 1,300 calls to the hotline since 2017, but Loew says, not so fast.

“What they gave you was everything under the sun, when the phone rings, that’s what they counted and what they provided you,” she said.

For instance, documents FOX 11 obtained show that for the first month of the hotline in January 2017, Metro reported the hotline received 137 calls, but a closer look at the logs shows every single one of the calls were not applicable, a test, or a hang-up, yet they were still apparently counted in the total.

That trend continued over several years, for example, in October 2019, Metro reported that the hotline served 27 people for the month, but the true call logs provided to FOX 11 by Loew, which show specific times, dates, locations, and summaries, shows that 19 of those calls were hang-ups or wrong numbers.

Only 8 of the reported 29 were legitimate calls.

Records show that Metro reported 349 calls to the Off Limits hotline in 2019, but FOX 11’s investigation found 260 of those calls were wrong numbers or hang-ups, that’s 74% of the call volume for the year.

“Peace Over Violence was clearly reporting self-inflated numbers, but when I learned that Metro was turning around and conveying that same information that POV had inflated to the public, I would call that lying,” Loew said.

For example, in January, before the COVID-19 pandemic, Metro reported that the hotline served 18 people for the month. However, the true call data shows that only two of those calls were about sexual harassment-related to L.A. Metro.

Through August of 2020, records appear to show that only 13 sexual harassment-related calls have come into the Off Limits hotline for the year. When that number is divided by the cost of the contract, that staggeringly low call volume is currently costing taxpayers $8,450 per call.“

The taxpayers would be furious if they knew this was being done with their money,” Loew said.

"Awarding no-bid contracts with public money from my perspective is a no go, period,” Humphreville said. 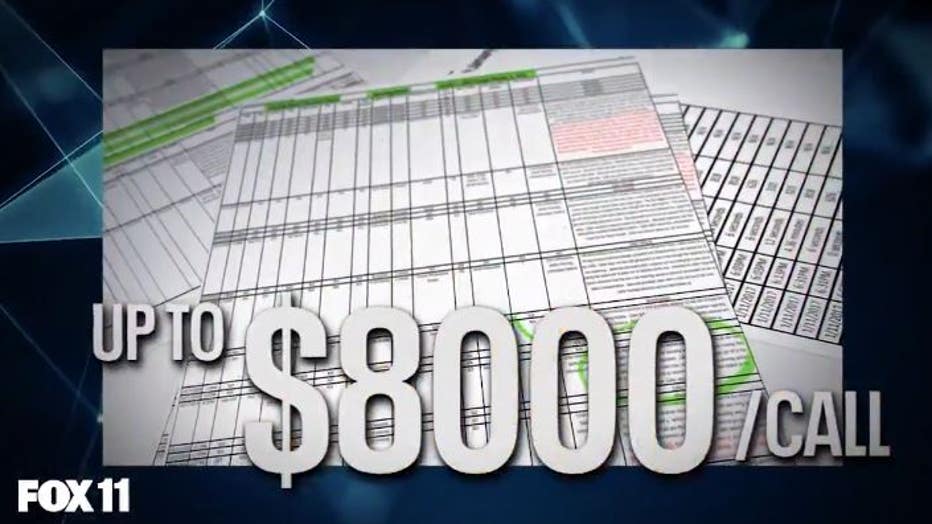 “You’re spending $8,000 a call, they’re trying to hide how much they’re doing it, it’s a complete cover-up, it’s just inexcusable, it’s not right.”

Loew told FOX 11 she blew the whistle, providing us with two internal memos she sent to her bosses in February and May 2020, where she criticized the low call volume and recommended the contract with Peace Over Violence be terminated, but she says, nothing happened.

“I realized that this was really bad,” she said.

So how was this program allowed to continue, and how did it come to be in the first place?

Peace Over Violence, the charity Metro awarded the hotline contract to is a well known LA-based non-profit that’s dedicated to stopping violence and harassment against women. LA County Supervisor Sheila Kuehl sits on Peace Over Violence’s advisory board.

Giggans is one of Sheila Kuehl’s best friends, and Kuehl officiated her wedding.

A photo on Giggans’ Facebook page shows her with Kuehl on election night in 2014 with the caption “Waiting for election results at Sheila Kuehl victory party, we hope.”

Giggans is also one of Kuehl’s campaign donors, donated thousands of dollars to her race for LA County Supervisor in 2014.

And it wasn’t long after Kuehl’s election that Peace Over Violence got its first deal with LA Metro, where Kuehl is a board member.

It was a $75,000 no-bid purchase to start the “Off Limits” marketing campaign to let riders know that sexual harassment wouldn’t be tolerated on Metro’s systems.

It was announced in a press conference that both Kuehl and Giggans attended, and Loew says it planted the seeds for what came next.

"A hotline came to be, and that was done privately in the office of Sheila Kuehl and Mayor Garcetti,” she said.

Loew points to an email sent in February 2016 by Madeline Moore, one of Kuehl’s deputies. It was sent to Giggans, members of Metro’s executive leadership, and a representative from Mayor Garcetti’s office.

None of the other Metro board members were included in the email.

Later that year, in August 2016, Kuehl’s office got what it wanted.

In January 2017, Giggans and Metro announced the Off Limits hotline to the public, and despite the low call volume, the Peace Over Violence contract was renewed with another $160,000 no-bid purchase order until January 2019.

“My concerns about the call volume were ignored,” Loew said.

“Everything was being done behind closed doors.”

Then, in January 2019, Metro not only renewed the Peace Over Violence contract again, but they also extended it three more years, awarding the nonprofit a no-bid contract worth just over $494,000 through 2021.

Loew says there were clear conflicts of interest between Kuehl and Peace Over Violence that was never disclosed.

“Nobody knew about that past relationship,” she said.

In addition to the no-bid contracts, Kuehl appointed Giggans to the powerful Civilian Oversight Commission, which has subpoena power over the Sheriff’s Department.

Loew tells FOX 11 that when she started blowing the whistle on the hotline and other alleged misconduct at Metro, she was retaliated against, including a denied promotion, and the moving of her office from the executive floor down to the P1 basement level next to the parking garage and restrooms.

As a result, she filed a whistleblower retaliation lawsuit against Metro in February, and still works there now.“It’s all worth it if people are held accountable,” Loew said.

Metro told FOX 11 they cannot discuss Loew’s ongoing litigation, but they defended the Off Limits hotline saying in part:

“Yes, there have been misdialed numbers or hang-ups, but of that total number, more than 230 calls have been specific sexual assault or harassment calls that have helped victims. The success of the hotline is not based on the volume of calls. It is a critical resource available to our transit customers 24/7. If 911 received a low number of calls, would you recommend it be shut down? Sheila Kuehl did not influence Metro’s decision to retain the services of Peace Over Violence before, during, or after sole-source contract negotiations.”

Patti Giggans declined to be interviewed for this report, but in a statement, Peace Over Violence told FOX 11 the low call numbers are partially due to decreased ridership from the pandemic, even though records show the call volume was already remarkably low before COVID-19 arrived.

In a statement, Peace Over Violence said in part:

“This calculation of $8,000 per call is social math that does not express the severity of sexual harassment or the seriousness of the issue. We do not inflate the call numbers and we count accurately all the calls that are received on the Off Limits hotline. According to our contract, all calls coming into the hotline are legitimate. POV reports the sexual harassment calls to Metro as per their instruction. We cannot put a price tag on serving a survivor of violence and there are no quotas associated with our hotlines. We are there to serve the people that call 24/7. This is not a fee per survivor service. Metro is paying for the program, not per survivor.”

L.A. County Supervisor Sheila Kuehl also declined to be interviewed for this story, though her staff claims she only found out about the hotline when she was invited to the press conference announcing it.

“Supervisor Kuehl did not recommend Peace Over Violence for the Metro contract. The choice was made and negotiated by the Metro CEO Phil Washington and his staff, recognizing that there was no better organization to help develop a message and program related to the growing issue of sexual harassment on Metro’s buses and trains. As for the efficacy of the contract, if each month, 10 women had the courage to call for help, it is worth every penny. [Madeline] Moore’s email made recommendations on the proposed scope of work, input that is completely appropriate given the Supervisor’s role as a Metro board member.“

$8,000 bucks a call with a crony? It sounds like cronyism to me,” Humphreville said.

As for Loew, her retaliation lawsuit is going to a jury trial next summer, and she believes the $890,000 pumped into these no-bid contracts would have been better spent elsewhere.“I believe that Metro contracted with Peace Over Violence because there were personal relationships involved, Board members wanted to support friends,” she said.

FOX 11 has learned that Metro changed their policy in July to have passengers first call 911 or Metro dispatch instead of the Off-Limits hotline if they experience sexual harassment, and Off Limits, advertisements have been pulled from the system with Metro ads instead.

Taxpayers are still on the hook for the Peace Over Violence contract through 2021.