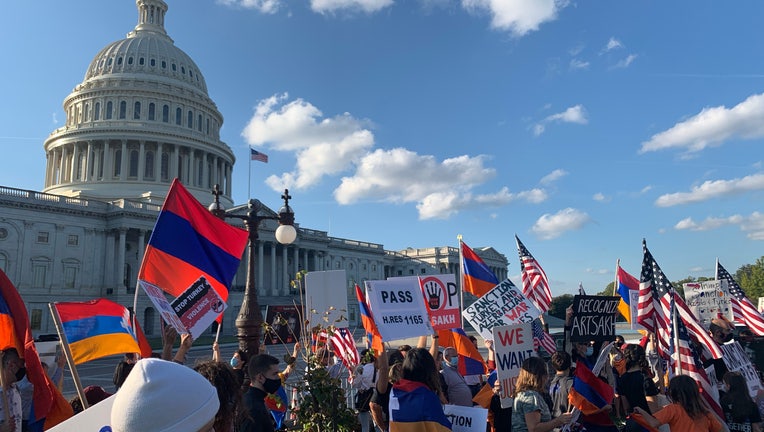 LOS ANGELES - Hundreds of Armenian-Americans and their supporters gathered in front of the U.S. Capitol Thursday to call on Congress to take action against Turkey.

They are demanding sanctions on Turkey and Azerbaijan, saying the two have been attacking Armenia for over two weeks now.

One man from Los Angeles bought a ticket last minute and flew to D.C. for 24 hours to take part in the protest and march.

He says this is about human rights for everyone, everywhere.

"This issue that just happens to be in Armenia is going to have long-term ramifications for the world. If you let war crimes continue just in Armenia and Artsakh. If you're allowing something like this to happen that means you are going to allow it to happen around the world. And if there is no accountability for it is just going to continue. As citizens of the United States we each have a responsibility to take action and stand united," said Dickran Khodanian.

Protests have been occurring across the world as Armenians call for an end to Azeri aggression.

• Armenians from LA travel to Washington D.C. to protest against Azerbaijani aggression

HR 1165 is a resolution condemning Azerbaijan's military operation in Nagorno-Karabakh and denouncing Turkish interference in Armenia. The resolution calls for the U.S. to stop sending financial aid to Turkey and Azerbaijan.