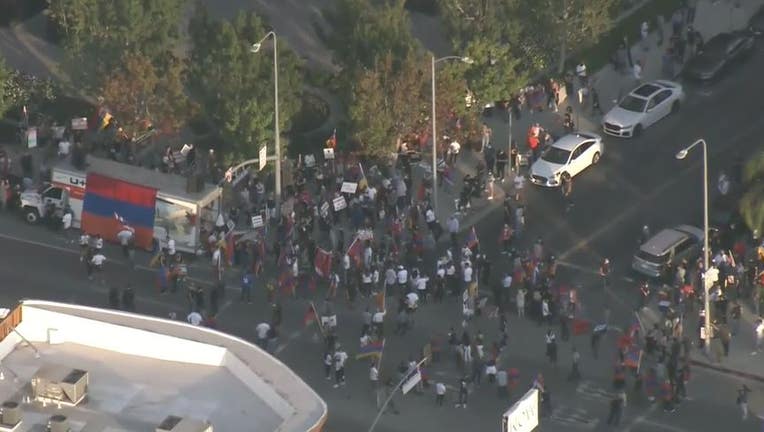 LOS ANGELES - Over a thousand people gathered Wednesday outside the Azerbaijani Consulate General near Brentwood to protest the recent attacks occurring along the border of Armenia and Azerbaijan.

The demonstration was organized by the Armenian Youth Federation to protest against Azerbaijan's aggression against Armenia and Artsakh.

Heavy fighting between Armenian and Azerbaijani forces over the separatist region of Nagorno-Karabakh, also known as Artsakh, started on Sept. 27th when Azerbaijan began the shelling of civilian populations throughout Artsakh and surrounding regions.

Since fighting erupted Sunday, dozens have been killed.

Fighting continued for a fourth straight day on Wednesday, with statements from both sides indicating that the flare-up of a decades-old conflict was no closer to an end.

Leaders of Azerbaijan and Armenia brushed off the suggestion of peace talks Tuesday, accusing each other of obstructing negotiations over the territory of Artsakh.

Armenia said one of its warplanes was shot down by a fighter jet from Azerbaijan’s ally Turkey, killing the pilot, in what would be a major escalation of the violence. Both Turkey and Azerbaijan denied it.

The international community is calling for talks to end the conflict.

Artsakh is a region that lies within Azerbaijan but has been under the control of ethnic Armenian forces backed by the Armenian government since 1994 at the end of a separatist war.

The Armenian National Committee of America – Western Region said they strongly condemn the acts of aggression by Azerbaijan and has called on the international community, including the United States, “to end its appeasement of Azerbaijan and hold this genocidal dictatorship accountable for its egregious violations of fundamental human rights and its perpetration of war crimes against civilian populations.”

Los Angeles is home to the largest population of Armenians outside of the country of Armenia.