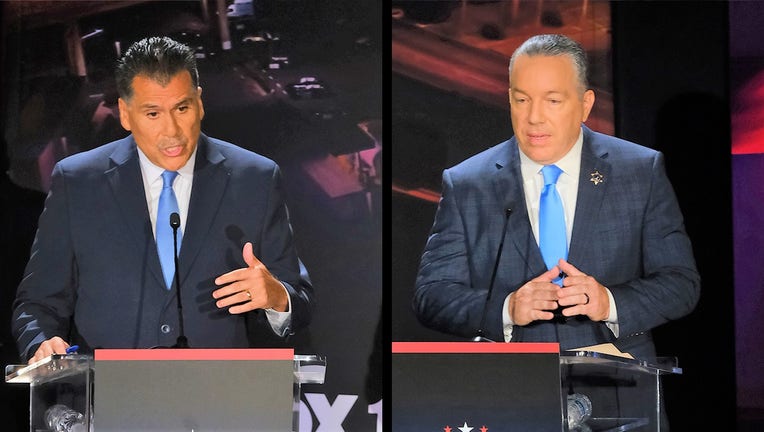 From left to right: Robert Luna and Alex Villanueva (FOX 11)

LOS ANGELES - The heated battle for the job of Los Angeles County sheriff will come to a head Tuesday, with Alex Villanueva looking to claim a second term and former Long Beach police Chief Robert Luna hoping to carry out the rare feat of ousting an incumbent sheriff.

Villanueva's victory four years ago over incumbent Jim McDonnell marked the first time in roughly a century that a sheriff had lost a re- election bid in the county. But now Villanueva finds himself in danger of meeting the same fate at the hands of Luna, with the most recent polls showing the challenger with an edge over the incumbent.

The pair have run a spirited campaign, with Luna attacking the incumbent over his torrid relationship with the county Board of Supervisors and accusing him of ignoring the issue of deputy gangs within the department. Villanueva has deflected such criticism, saying his battles with the board show he is a fierce defender of the department and its deputies, and insisting that he has gone to great lengths to attack and ban alleged deputy cliques in the agency.

"Mr. Luna, the Civilian Oversight Commission, the Board of Supervisors, they cannot wrap their minds around the idea that (on) my very first day in office, I removed the East L.A. station captain from his command because I had doubts about his ability to lead," Villanueva said last week, responding to Luna's latest allegation of inaction on the deputy gang issue.

The sheriff said four deputies were also fired from the East L.A. station over their actions at a much-publicized fight during a deputy gathering at Kennedy Hall. He also said he implemented the department's first-ever policy barring "outlaw groups," codified it in training materials and sponsored legislation to extend the policy statewide.

"There is nothing legally we can do left," Villanueva said. "We can't line up people, strip them down and fire people with tattoos, as some people have literally suggested. So when my opponent falsely asserts that nothing has been done, he's just repeating the narrative politically driven by the Oversight Commission that works for the board."

The heated battle for the job of Los Angeles County sheriff will come to a head Tuesday, with Alex Villanueva looking to claim a second term.

Luna insisted last week that deputy gangs remain an issue, citing "men and women from the sheriff's department who have come forward, good men and women who want this rooted out."

"So how do employees feel about coming forward and reporting misconduct when they know you have a sheriff that's going to look the other way?" he asked. "That's been proven time and time again."

"I still have family who live here in East Los Angeles and just a couple of weeks ago, being in the East Los Angeles parade, how many people were stopping me and saying, `Chief, we need change here. There are gangs that are running this station. We need them out.'

"These are community members, and not just one or two, many of them. It's a problem. It needs to be fixed. We need change."

Villanueva's victory four years ago came with strong backing from reform-minded community groups and Democrats. But over the past four years, Villanueva's support among those groups has waned as he repeatedly clashed with the Democrat-dominated Board of Supervisors over funding and policy matters. He has also repeatedly defied subpoenas to appear before the Civilian Oversight Commission and refused to enforce the county's COVID-19 vaccination mandate among his deputies and department employees.

Villanueva's campaign insists he has worked to restore public trust in the sheriff's department, pointing to the rollout of body-worn cameras and boosting minimum requirements for new deputies. The campaign also boasts the agency is "the most diverse in the nation."

"In his next term, Sheriff Villanueva will work to reduce violent crime, compassionately clean up homeless encampments and hold public officials accountable for their actions," according to his campaign.

Speaking to his supporters after the June primary, Villanueva said he is "focusing on what matters to people -- homelessness and violent crime."

"We're going to keep doing what we're doing, because it's the right thing to do," Villanueva said. "... My job is to keep the community safe. If that means I have to battle the Board of Supervisors, so be it."

"Growing up in East Los Angeles, patrolled by the sheriff's department, opened my eyes to examples of both good and bad policing, and inspired my 36-year career in law enforcement," Luna said in a candidate statement.

He said he will work to "modernize" the sheriff's department and its jail system and improve the mental well-being of deputies and employees.