The pursuit came to an end in the Echo Park area.

LOS ANGELES - A motorcyclist wanted for speeding who led authorities on a pursuit in Los Angeles and Orange counties was taken into custody in the Echo Park area in dramatic fashion.

The California Highway Patrol began pursuing the suspect riding a motorcycle in Los Alamitos just before 10 a.m. Monday. The pursuit continued as the suspect led officers southbound into Orange County and back into Los Angeles County from Carson to South Los Angeles on the northbound lanes of the 110 Freeway.

At one point, SkyFOX recorded the suspect reaching speeds up to 90 mph.

By 10:30 a.m., the suspect merged onto the 101 Freeway and into Echo Park. The suspect then got off at the Sunset Boulevard exit where the pursuit continued on surface streets in the Elysian Park area near Dodger Stadium. 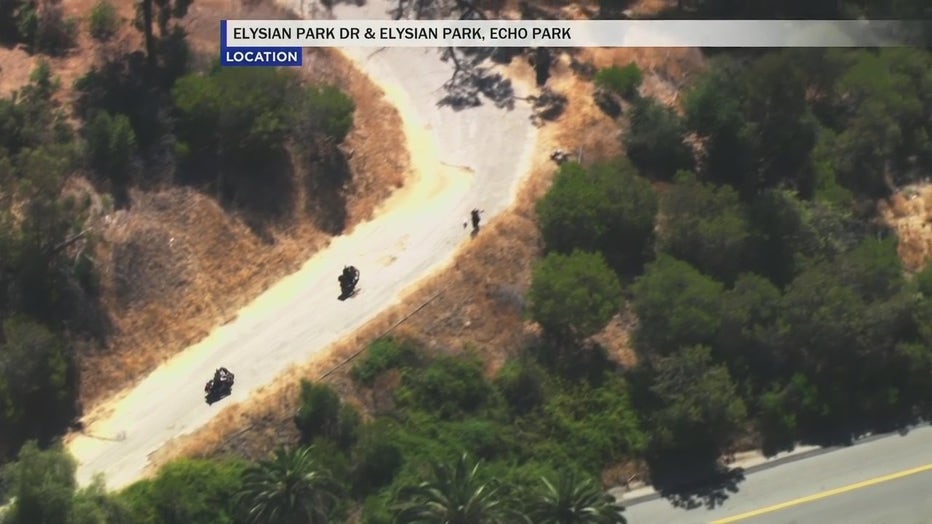 By 10:35 a.m., the suspect went off-road and took a shortcut over a hiking trail and back onto surface streets on Stadium Way and back onto Sunset Blvd. and eventually, onto Glendale Blvd., as the pursuit continued westbound.

The suspect went back into the area of the hiking trail by 10:45 a.m. and got back onto surface streets in the Echo Park area and into a Silver Lake neighborhood through tight and narrow roads.

Just after 10:50 a.m., the motorcyclist came to a stop at an apparent apartment building in Silver Lake where the suspect was tackled by CHP officers and taken into custody.

A pursuit across Los Angeles and Orange counties came to an end in Echo Park.

No injuries were reported in the pursuit.

No further information was immediately released by authorities.