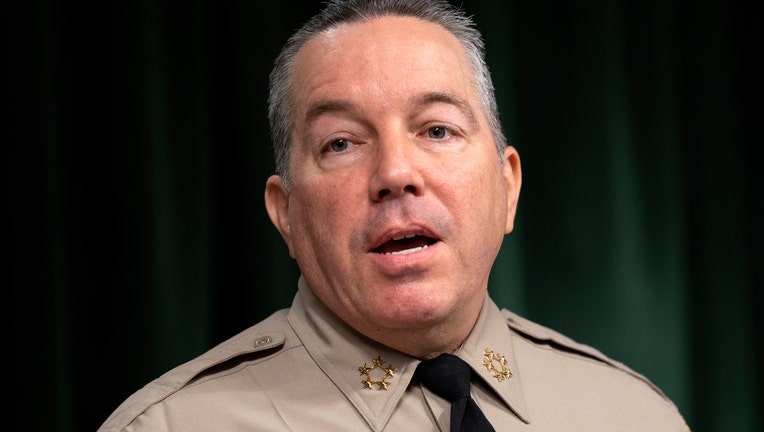 LOS ANGELES - The Los Angeles County Board of Supervisors took Sheriff Alex Villanueva to task on Tuesday for a $63 million budget deficit, with the CEO citing escalating overtime as a driving factor.

The discussion came as the board approved $3 billion in additions to the countywide budget, which now totals $36 billion.

Supervisors Hilda Solis and Sheila Kuehl co-authored a motion calling for a hiring freeze on Sheriff's Department administrative and clerical personnel, pushing for a deficit mitigation plan, and recommending an "operational review" by the auditor-controller. The motion was unanimously approved.

CEO Sachi Hamai said the department's deficit ballooned from $25 million to $62 million and then $90 million in just three months, taking the county budget team by surprise. While the sheriff has done a good job of hiring new deputies -- which had previously proven difficult -- department overtime has grown even as new deputies are trained and sworn in, according to the CEO.

"There seems to be something going on with the overtime budget," Hamai told the board.

The county advanced $16 million to reimburse costs related to the Woolsey Fire and gave the department another $11 million it had paid out on judgments and settlements, in order to reduce the deficit. Then it funded the deficit to close the books for the fiscal year ended June 30.

An administrative director for the department said that increasing workers' compensation and retiree costs were part of the problem, but Hamai said the county was helping all departments fund those costs. She said she expected the auditor-controller's review would turn up other factors, reiterating her concern about overtime.

The CEO said the sheriff had also failed to adjust expected revenues when he chose not to apply for certain federal or state grants and also may not have collected other revenues due.

"Decisions he makes really (do) have an impact in trying to control his budget," Hamai said.

The CEO highlighted the fact that an estimated 43 cents of every dollar of locally generated tax revenue goes to fund the Sheriff's Department.

Faced with questions from constituents about whether the board's move was personal -- given other battles between the supervisors and the sheriff on reinstating deputies, issues of transparency and deputy cliques -- Kuehl said she had assured Villanueva in a meeting on Monday that it wasn't.

"It's important not to trivialize this action," Kuehl said. "We are taking $63 million that could be (spent) somewhere else" to cover the department.

Villanueva said he was committed to working with the board, but urged the supervisors to fund the "true" cost of running his department, which he pegged at $3.9 billion, compared with funding of roughly $3.5 billion.

"We are currently the most understaffed law enforcement agency in the United States," the sheriff told the board.

"Our operations are an open book," Villanueva said, though he suggested that better work might be done in a less open forum and then left to allow his subordinates to answer the board's questions.

The sheriff later released a longer statement about the hiring freeze motion that said, in part:

"As sheriff, I will do my part to ensure we continue to provide critical public safety services as we seek to reign inthese structural deficits. I will ask you as a board to fund the true cost of providing the critical services we do across all of our patrol, investigative, security, and custodial obligations that cover the entire county of Los Angeles.

"Our operations are an open book, and if anyone can identify what can be improved upon we are open to constructive criticism and a collaborative effort in delivering public safety services effectively and cost consciously.This motion may not be the most appropriate avenue to do the hard work of identifying what activities should be funded, and at what levels, so perhaps we all need to reset our efforts.

"The county..s budget, like any public budget, is a political document that speaks to the funding priorities of each member of the board. I want to encourage the Board of Supervisors to fund the true cost of providing public safety, which is approximately $3.9 billion in today's dollars. I will commitmyself to providing that safety to the public that deserves nothing less."

Supervisors Kathryn Barger and Janice Hahn both noted that the department has a long history of outspending its overtime allocation.

"Overtime always blew the budget in the past," Hahn said.

But the difference, Hamai insisted, is that in years past, the department was struggling to fill hundreds of new positions required to comply with various settlement agreements and changing state laws. Overtime was a natural consequence. Now hundreds of those jobs have been filled, but deputiescontinue to rack up overtime, she said.

Hahn offered an amendment calling for a look at the costs of running the department, seeming to imply that she would support more funding for Villanueva. The amendment was also approved by a unanimous vote.

Barger raised concerns about compromising patrol service in unincorporated areas, though Hamai assured her that funding for those patrols came from a non-county source and would not be affected.

Ron Hernandez, president of the Association for Los Angeles Deputy Sheriffs, the union that represents deputy sheriffs, said if the board held back funds, they would also have to make hard choices about how to cut critical services, including "which jail block won't have safe staffing tonight."

Solis pushed back against any perception that public safety would be put at risk, noting that critical positions are exempted.

"This in no way is a message that we don't want to see cops on the beat," Solis said.

Supervisor Mark Ridley-Thomas asked the acting auditor-controller to detail the consequences of not balancing the budget and emphasized that the sheriff could be charged with a misdemeanor for not caring out his duties.

The board also directed the auditor-controller to transfer $143 million out of the department to be held until a mitigation plan is developed. It called for quarterly progress reports from the Sheriff's Department.