Embattled City Councilman Kevin de León attended Friday's council meeting, but his appearance was brief as protesters immediately shouted for him to leave, and he was no longer present after a recess of around 45 minutes.

LOS ANGELES - Embattled City Councilman Kevin de León attended Friday's council meeting, but his appearance was brief as protesters immediately shouted for him to leave, and he was no longer present after a recess of around 45 minutes.

De León had not attended a council meeting since Oct. 11. He has defied widespread calls to resign over his participation in a racist 2021 conversation with Council members Gil Cedillo and Nury Martinez and a top county labor official that was leaked in October. He is also facing a recall effort that is in the process of gathering signatures.

Protesters have regularly shown up at meetings demanding that de León and Cedillo resign before the city conducts its business.

De León entered the chamber during public comment and sat in his seat. When audience members realized he was present, protesters shouted for him to leave while his supporters cheered. De León stared blankly at the commotion as he sat in his assigned council seat for the first time in nearly two months. 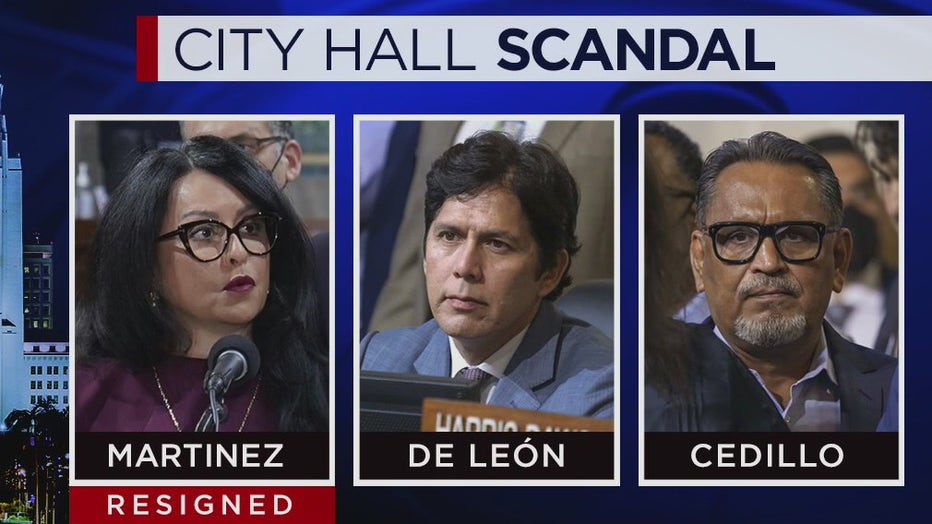 Council President Paul Krekorian immediately announced a recess and then went over to de León to have an animated discussion, at one point gesturing at the rowdy audience. All the members then walked out of the room.

Krekorian said previously that if de León did attempt to come back, other members of the council would leave the meeting. Prior to de León's arrival in the chamber, several of his supporters gave public comment in defense of de León.

When Krekorian resumed the meeting, de León was no longer present in the chamber. Krekorian did not immediately address the situation.

Councilman Mike Bonin, whose son was the target of racist comments during the leaked conversation, said on Twitter that he, along with Council members Marqueece Harris-Dawson and Nithya Raman, walked out of the meeting. Bonin called de León a "vile racist" who "needs to resign."

During the Oct. 11 meeting, de León and Cedillo had to leave the chamber as protesters chanted. Martinez resigned shortly after the leak. All three council members have also been censured by their colleagues.

The council meets one more time, on Tuesday, before its winter recess.

During several interviews after the recordings were leaked, de León claimed that resigning would be the easy way out, and he wants to do the work of healing with the communities that he has hurt.

The 55-year-old former state senator and assemblyman has been on the council since 2020 and made an unsuccessful run for mayor this year.

Among other comments in the recorded conversation, Martinez belittled Bonin, who is white and has a Black son, and criticized the child for his behavior at a Martin Luther King Day parade -- saying Bonin's son was misbehaving on a float, which might have tipped over if she and the other women on the float didn't step in to "parent this kid."

De León then compared Bonin's handling of his son at the MLK Parade to "when Nury brings her little yard bag or the Louis Vuitton bag."

More than a month after audio recordings were leaked involving LA Councilmembers engaging in racist comments, Kevin de Leon and Gill Cedillo continue to take home their full salary. Now faith leaders are speaking out and urging them to resign.

In October, de León told KBLA's Tavis Smiley that he does not plan to resign and attempted to apologize for his participation in the conversation.

De León called the Black community "the community that I've aggrieved, I've hurt the most" and said he felt a sense of embarrassment and shame.

When Smiley asked how the councilman could claim that he isn't resigning because his district needs a voice when he isn't representing them at meetings, de León took a lengthy pause.

In October, de León sent a letter to Krekorian asking to be excused from attending council meetings "in the coming weeks" so he could focus on the healing process.

De León told Krekorian he would be "spending the coming weeks and months personally asking for your forgiveness."

But Krekorian did not appear to accept de León's attempt to make amends. In a statement, Krekorian said "apologies will not be nearly enough to undo the damage that this city has suffered. The only way we can begin to heal as a city is for Mr. de León to take responsibility for his actions, accept the consequences, and step down."