Vice President Kamala Harris visited Greenville, South Carolina, on June 14, 2021, as part of a nationwide COVID-19 vaccine push ahead of the 4th of July.

GREENVILLE, S.C. - Vice President Kamala Harris arrived in South Carolina on Monday as part of the Biden administration’s nationwide effort to promote its ongoing coronavirus vaccination campaign ahead of the July 4 holiday.

Harris landed in Greenville and spoke at a COVID-19 vaccine mobilization event at the Phillis Wheatley Community Center. Speaking to a crowd of more than 150 people, she stressed the effectiveness and safety of the vaccines amid vaccine skepticism and waning demand for the shots.

The visit marks the launch of a national vaccination tour, part of the White House’s "national month of action" aimed at encouraging more Americans to get vaccinated before Independence Day. 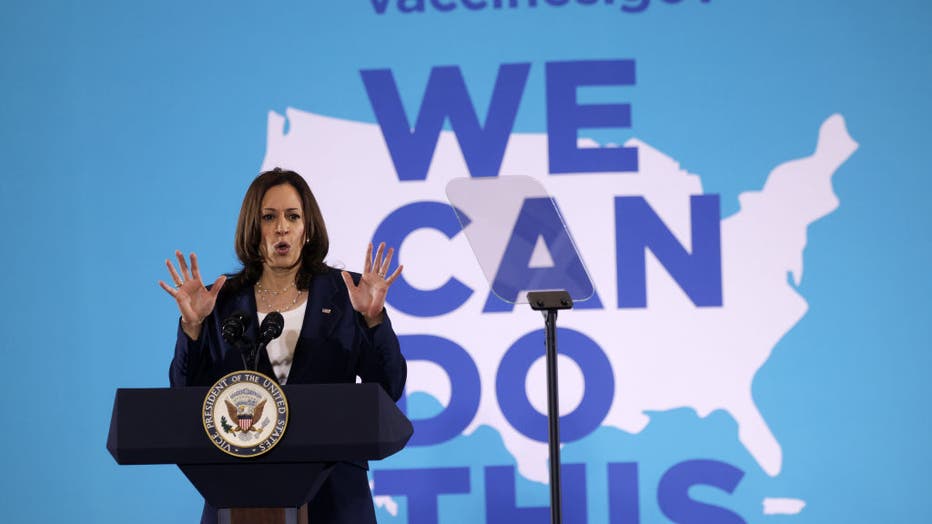 But the U.S. has faced challenges in appealing to those who have still not received them. The country hit a high of about 3.3 million injections per day on average in mid-April, according to the CDC. That number was down to about 870,000 a day on average in early June.

The South has been home to some of the lowest coronavirus vaccination rates in the country. According to an analysis last month by The Associated Press of data provided by the CDC, eight Southern states were in the bottom 10, all of which are under 40%. Mississippi was last at 32%, followed by Louisiana, Alabama, Wyoming, Idaho, Tennessee, Arkansas, Georgia, West Virginia and South Carolina.

In addition to the vaccination tour, the Biden administration’s month of action includes an early summer sprint of incentives and a slew of new steps to ease barriers and make the vaccines more appealing. Harris on Monday said some of those efforts include partnering with rideshare services to offer free rides to vaccine sites, having pharmacies across the country that are open 24 hours a day and working with childcare facilities to offer free childcare as people get vaccinated and recover from their side effects.

"Americans care for one another. Americans love our neighbor and in a perfect stranger’s face we see a friend — that’s who we are when we are at our best," Harris said. "And for that reason alone, Americans are going to keep getting vaccinated."

President Biden says 500 million doses of the COVID-19 vaccine produced in the United States will be sent out to countries around the world this year and intro early 2022.

Less than 39% of South Carolina's population was fully vaccinated as of last week, according to the state health department.

On a national level, the White House also teamed up with McDonald’s to encourage vaccination via a new design on McCafe cups. Anheuser-Busch announced a promotional giveaway earlier this month, saying it will "buy Americans 21+ a round of beer" once Biden’s 70% goal is met.

Furthermore, the administration is launching a new partnership to bring vaccine education and even doses to more than a thousand Black-owned barbershops and beauty salons, building on a successful pilot program in Maryland.

Meanwhile, the lengths to which the U.S. is resorting to convince Americans to get vaccinated stood in contrast to much of the world, where vaccines are far less plentiful. Facing a mounting U.S. surplus, the Biden administration has promised the U.S. would donate 500 million doses to help speed the pandemic’s end — on top of 80 million doses he has already pledged by the end of the month.

Biden called on global leaders to do the same in sharing their vaccine supply with struggling nations. He argued it was in both America's interests and the world's to make vaccination widely and speedily available everywhere.

"We’re going to help lead the world out of this pandemic working alongside our global partners," Biden said last week in England before the G-7 summit.