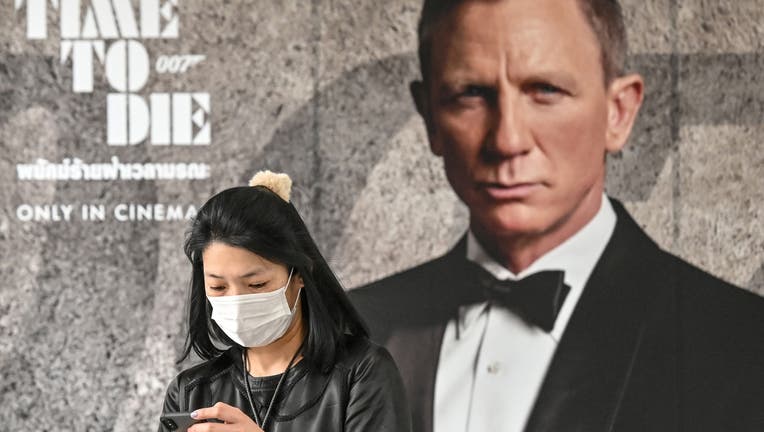 A woman wearing a facemask amid fears of the spread of the COVID-19 novel coronavirus walks past a poster for the new James Bond movie "No Time to Die" in Bangkok on February 28, 2020. - The new coronavirus has peaked in China but could still grow in

LOS ANGELES - Concerns over the coronavirus have delayed the planned release of the new James Bond film by several months, producers announced today.

"No Time To Die'' -- actor Daniel Craig's final outing as the famed fictional spy -- had been scheduled to open in April but will now be released in November.

"MGM, Universal and Bond producers, Michael G. Wilson and Barbara Broccoli, announced today that after careful consideration and thorough evaluation of the global theatrical marketplace, the release of NO TIME TO DIE will be postponed until November 2020,'' producers tweeted.

The move was the latest indication of how the coronavirus is impacting the entertainment industry worldwide. CBS has announced that production on the 33rd season of its award winning series "The Amazing Race'' has been delayed, and a scheduled three-week shoot in Venice, Italy for Paramount's "Mission: Impossible 7'' that was set to begin Monday was postponed after the Italian government stopped all public gatherings.

"Out of an abundance of caution for the safety and well-being of our cast and crew, and efforts of the local Venetian government to halt public gatherings in response to the threat of coronavirus, we are altering the production plan for our three-week shoot in Venice, the scheduled first leg of an extensive production for "Mission: Impossible 7,'' a Paramount spokesperson told the Hollywood Reporter.

"During this hiatus, we want to be mindful of the concerns of the crew and are allowing them to return home until production
starts. We will continue to monitor this situation, and work alongside health and government officials as it evolves.''

Studios have also cancelled plans for movie premieres in China for Disney's live action "Mulan'' and for "No Time to Die'' since theaters there have been closed since mid-January.

"The impact in 2020 from Covid-19 (coronavirus) on the motion picture business cannot be overstated,'' a financial expert told Deadline.com. "The closure of cinemas in China alone is approaching a loss of $2 billion to the global box office.''

The Asia segments of most scheduled concert tours for performers such as BTS and Green Day have also been canceled or postponed.

Executives have been reluctant to go on the record about the costs of or response to the coronavirus, according to Variety, "but privately they said they were taking "a wait-and-see'' approach as the number of hotspots expands.

Many are in regular contact with the Centers for Disease Control (CDC) and the World Health Organization as they assess the rapidly changing situation,'' Variety reported.

There have been nine deaths from coronavirus in the United States, all in Washington state. Worldwide, roughly 93,000 cases of COVID-19 have been reported, and more than 3,100 deaths.