Watch President Joe Biden’s inauguration speech that he delivered after he was sworn-in on Capitol Hill on Wednesday, Jan. 20, 2021.

WASHINGTON - A full-throated, supremely confident Lady Gaga belted out the national anthem Wednesday in a very Gaga way — with flamboyance, fashion and passion.

The Grammy winner wore a large dove pin and an equally large red and billowing sculpted skirt as she sang into a golden microphone, delivering an emotional and powerful rendition of "The Star-Spangled Banner."

She [Gaga] was followed by Jennifer Lopez, dressed all in white, delivering a moving medley of "This Land is Your Land" and "America the Beautiful." 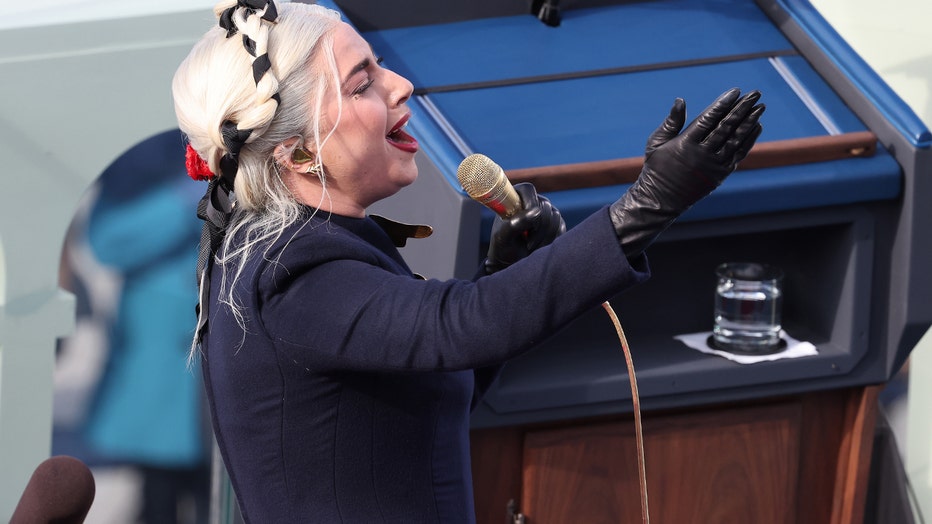 Lady Gaga sings the National Anthem at the inauguration of U.S. President-elect Joe Biden on the West Front of the U.S. Capitol on January 20, 2021 in Washington, DC. (Taso Katopodis)

Garth Brooks sang "Amazing Grace," pausing to ask the audience, both in attendance and at home, to sing along to the last verse. As he left the podium, he shook hands with Biden, former Vice President Mike Pence, donned his cowboy hat and hugged former President Barack Obama.

The stars were among a slew of glittery celebrities descending on Washington — virtually or in person — to welcome the new administration of Joe Biden and Kamala Harris, a duo popular in Hollywood, where former President Donald Trump was decidedly not.

RELATED: Kamala Harris sworn in as vice president in historic moment for America

The inaugural committee has made sure to blend this high-powered list with ordinary Americans and inspiring stories. Segments will include tributes to a UPS driver, a kindergarten teacher and Sandra Lindsay, the first in New York to receive the COVID-19 vaccine outside a clinical trial. The proceedings will be carried by ABC, CBS, CNN, NBC, MSNBC and PBS as well as the committee’s social media channels and streaming partners.

There's also a virtual "Parade Across America" on inauguration afternoon, hosted by actor Tony Goldwyn with appearances by Jon Stewart, Earth Wind & Fire and the New Radicals — reuniting after more than two decades — among many others.

The history of celebrities performing at inaugurations dates back to Franklin D. Roosevelt’s third inauguration in 1941, when a gala celebration the evening before saw performances from Irving Berlin, Mickey Rooney and Charlie Chaplin, says Lina Mann of the White House Historical Association. "Chaplin performed his monologue from ‘The Great Dictator,’" Mann notes. 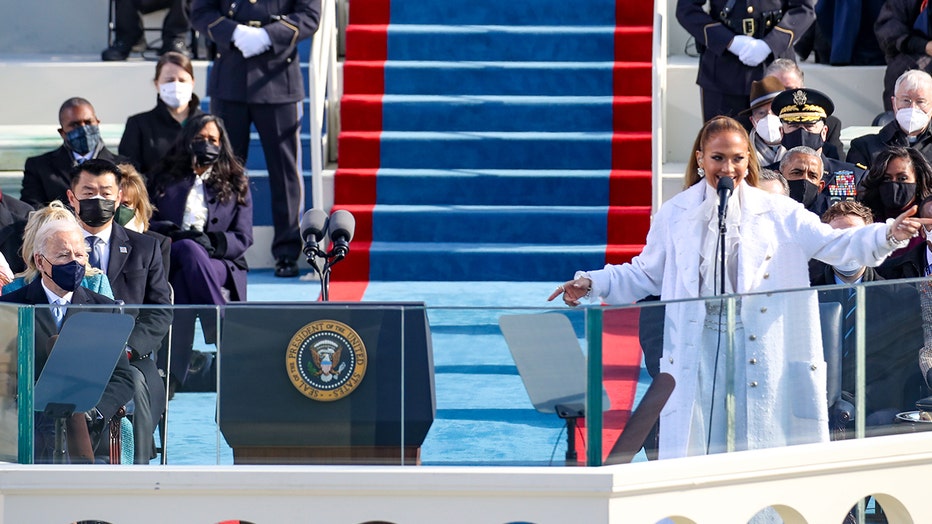 Jennifer Lopez sing during the inauguration of U.S. President-elect Joe Biden on the West Front of the U.S. Capitol on January 20, 2021 in Washington, DC.

The celebrity component only increased over time, and one of the starriest inaugurations was that of John F. Kennedy in 1961. That celebration, hosted by Frank Sinatra, drew Harry Belafonte, Nat King Cole, Ella Fitzgerald, Gene Kelly, Ethel Merman, Laurence Olivier, Sidney Poitier and other celebrities.

Fast forward to the first Barack Obama inauguration in 2009, where Aretha Franklin sang "My Country, 'Tis of Thee" at the swearing-in, and the new president and his wife, Michelle, were serenaded by Beyoncé singing "At Last" at an inaugural ball.

For complete coverage of the inauguration, please visit: https://apnews.com/hub/biden-inauguration