Of the $50 million Amplify Energy will pay to settle the lawsuit, $34 million will go to a class of fishers, $9 million will go to property owners and about $7 million goes to the tourism industry such as whale watching companies.

SANTA ANA, Calif. - The company that operates an underwater oil pipeline that gushed thousands of gallons of crude into the ocean off Huntington Beach last year has agreed to settle a class-action lawsuit for $50 million, according to court records obtained Tuesday.

The court papers were filed at 10 p.m. Monday, according to attorney Wylie Aitken, the lead lawyer for the plaintiffs. A hearing is scheduled for Nov. 16 for U.S. District Judge David Carter to sign off on the agreement.

Of the $50 million Amplify Energy will pay to settle the lawsuit, $34 million will go to a class of fishers, $9 million will go to property owners and about $7 million goes to the tourism industry such as whale watching companies, Aitken said.

The settlement also includes multiple steps to try to prevent such a spill from happening again, Aitken said. Many of the pointers came from experts the plaintiffs hired, Aitken said.

"We hired the best safety experts we could find and they came up with a number of ideas," Aitken said. "One of the things we're most proud of certainly is how it was expedited," he added of the litigation, crediting Carter with pushing for a trial date.

Now officials will turn to contacting all of those who were affected by the oil spill to make a claim. Direct notices will go property owners and the attorneys have many contacts within the fishing industry, but it will be tougher to notify all of the tourism industry victims, Aitken said.

According to the agreement, Amplify Energy will increase training to comply with state laws "to notify and update all appropriate response agencies of any release or threatened release of a hazardous material or pollutant substance from any pipeline, conveyance system, or any other operation of defendants in the state of California, as required by law."

Amplify also agreed to notify the state Office of Emergency Services "and any local unified environmental program or agency."

The company agreed to spend at least $250,000 for pipeline related procedures before the pipeline is restarted.

The agreement alleges that "in the early morning hours of Jan. 25, 2021, the MSC Danit and M/V Beijing chose to remain `at anchor' during a storm, and as a result drifted erratically while dragging their respective anchors across the ocean floor, repeatedly crossing over Amplify's P00547 Pipeline while their anchors and/or anchor chains became entangled with and/or struck the pipeline, severely weakening and/or cracking the concrete casing protecting the pipeline and displacing a 4,000-foot section 105 feet."

The agreement comes after the company settled criminal cases in state and federal court and agreed to pay fines. The company agreed in federal court to pay a $7.1 million fine and $5.8 million to reimburse the U.S. Coast Guard for expenses from the October 2021 spill, and also agreed to pay $4.9 million in fines to resolve a misdemeanor complaint in state court.

The pipeline, which is used to carry crude oil from several offshore drilling platforms to a processing plant in Long Beach, began leaking the afternoon of Oct. 1, 2021, but the companies continued pumping oil through the line until the following morning, authorities said last year. 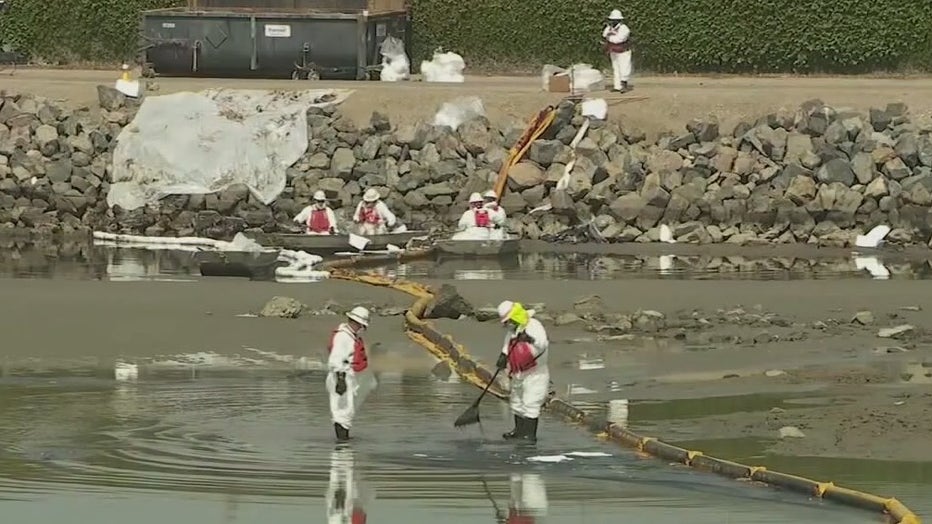 All told, about 25,000 gallons of oil seeped into the ocean from the ruptured 16-inch pipeline, which is submerged about 4.7 miles west of Huntington Beach. Aitken said the experts were in the process of calculating that the damage may have been greater, not in terms of volume, but in how far the crude spread.

The spill occurred in federal waters at the Elly oil-rig platform, which was built to process crude oil from two other platforms, which draw from a large reservoir called Beta Field. Elly is one of three platforms operated by Beta Operating Co., which is owned by Amplify Energy and also operates Ellen and Eureka nearby. Elly processes oil production from Ellen and Eureka and is fed by some 70 oil wells. The processing platform separates oil from water.

The leak forced the cancellation of the popular Huntington Beach Airshow, which was underway when the spill was detected. Beaches were closed up and down the Orange County coast as crews worked to contain the crude oil.

Federal investigators have said the pipeline appeared to have been damaged by a ship's anchor, likely belonging to one of dozens of cargo ships that were backlogged over a period of months outside the Los Angeles-Long Beach port complex.

More than a dozen companies doing business in the region sued Amplify Energy Corp. for damages resulting from the spill.

Fishing resumed in late November along the Orange County coast, following a two-month shutdown of fisheries due to the spill. The fishing ban encircled 650 square miles of marine waters and about 45 miles of shoreline, including all bays and harbors from Seal Beach to San Onofre State Beach, officials said.