As demonstrations continue across the world, protesters took to the streets here in Santa Monica to show their support for Ukraine.

LOS ANGELES - Hundreds of people gathered in Santa Monica Sunday afternoon for a protest against Russia's invasion of Ukraine.

The march was organized by the Ukrainian Culture Center Los Angeles, which is demanding that the Biden administration support the closure of the airspace over Ukraine, immediately provide military aid to Ukraine -- especially air defense systems and heavy weaponry -- as well as financial and humanitarian aid, immediately enact "hellish sanctions on Russia" and "isolate Russia in all possible formats on the world stage."

Many people who attended the march say they are grateful for all the support Ukraine has received, but they say more needs to be done.

"My mom and dad have missiles flying over their homes. My cousin and their kids and his wife are making Molotov cocktails to stop the tanks," one protester told FOX 11.

Hundreds of people gathered in Santa Monica Sunday afternoon for a protest against Russia's invasion of Ukraine.

Many of those protesting say Ukraine was their homeland and expressed concern for friends and family still living there.

A Pentagon spokesman announced Saturday that President Joe Biden has committed an additional $350 million in military assistance to Ukraine, including anti-armor munitions, small arms and other equipment to help the former Soviet republic defend itself.

Several protests have been held across the world. On Saturday, pro-Ukraine demonstrations in the Los Angeles area drew hundreds showing their support and demanding that Biden do more to assist the besieged country. 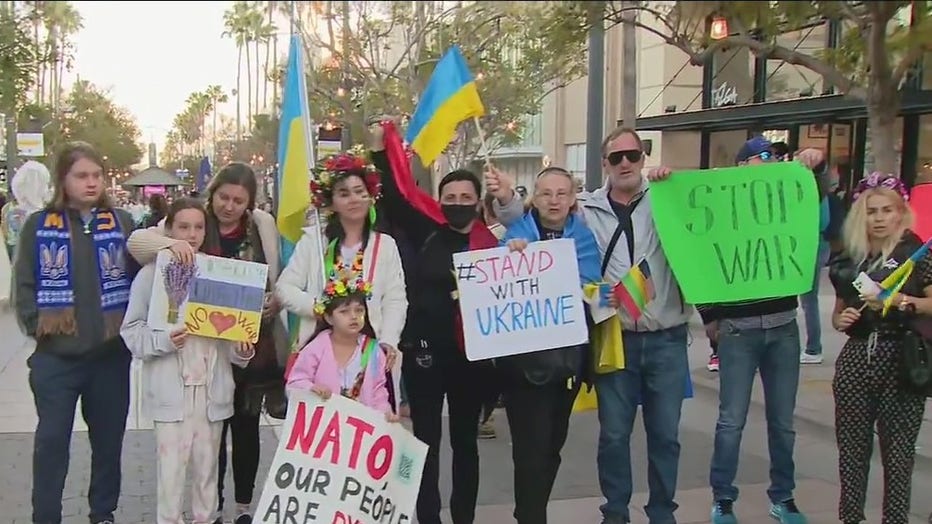 "Today We Are All Ukrainians," read a sign held by a demonstrator Saturday at Santa Monica and Sepulveda boulevards in West Los Angeles, where Sen. Dianne Feinstein has an office. Other signs read: "Stop Russian Imperialism," "Russia Go Home" and "Hands Off! Russia Take a Seat! End This Tyranny!"

Overnight, Los Angeles City Hall was illuminated in blue and yellow, the colors of the Ukraine flag, a show of solidarity that has been repeated at numerous landmarks worldwide.

Gana Hovey, a U.S. citizen, told the Los Angeles Times that her parents live in Kharkiv, the second-largest city in Ukraine and one that had withstood a barrage of bombing by Russia.

"My parents have been staying in a bomb shelter for the past three days," she said Saturday while demonstrating on Sepulveda Boulevard. "When they tell me things are quiet, I feel so relieved. All I want to hear is that things are quiet."

Conditions in Ukraine continue to worsen as many flee the country as Russia invades. FOX 11's Hal Eisner spoke to one SoCal woman who has family in both Ukraine and Russia.

Meanwhile, Archbishop José Gomez of the Archdiocese of Los Angeles condemned the invasion Sunday in a letter shared with the Catholic Ukrainian faithful.

"My heart is with all of you in this time of sorrow and uncertainty. With our Holy Father Pope Francis, His Beatitude Sviatoslav, and Metropolitan Gudziak, I deplore the Russian invasion of your homeland of Ukraine. Please know that your Roman Catholic brothers and sisters in the Archdiocese of Los Angeles will always be near to you in solidarity and prayer," Gomez wrote.

"We are praying for a swift end to the evil of this war. We ask Jesus Christ, the Lord of Peace, to touch the hearts of the aggressors, and move them to conversion. We also call on those in authority to seek a just peace that recognizes the dignity and sovereignty of the Ukrainian people."

Gomez concluded his message by reiterating Pope Francis' call to pray and fast for peace during the season of Lent that begins this week on Ash Wednesday.