A group took to the streets of Burbank to protest against what they say is Disney's "woke" agenda.

BURBANK, Calif. - Conservative groups are boycotting all things Disney over what they claim is the entertainment titan leaning too far left. 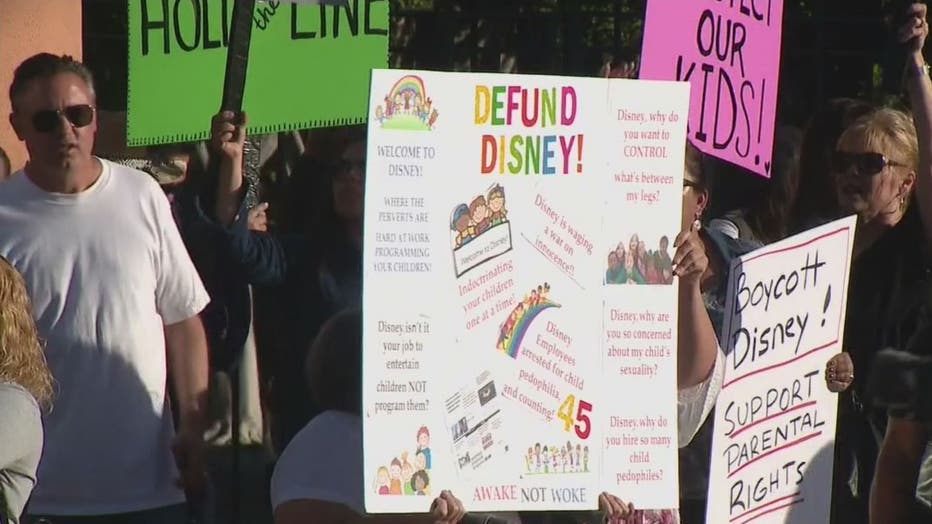 The demonstration was organized by a group, Hold The Line.

The protest was tied to Disney’s response to Florida’s Parental Right’s Education Bill which is also known as the "Don’t Say Gay" bill by its critics.

The bill which became a law in March prohibits teachers from addressing gender identity and sexual orientation in certain classrooms.

Disney’s CEO denounced the bill and employees walked out in protest in Burbank just a few weeks ago because they felt the CEO didn’t do enough from stopping the bill from becoming a law.

"I just want to protect children," said attendee Marcos Zelada Rosas, "I don’t think that Disney promoting these task forces that are trying to include the LGBTQ agenda on them at such a young age is a good idea."

The gathering was part protest along with part church lead by Christian recording artist and Hold The Line founder Sean Feucht.

The group brought in a mobile stage and speakers on a truck parked in front of the main studio gate for two hours.

"No one’s making them watch Disney," said one critic of the protest watching from across the street who wanted to stay anonymous.

Most Disney staff left before the protest began or was remotely working from home, but some studio traffic appeared to be rerouted to another exit away from the demonstration.

Protestors spilled out into one of the lanes on Alameda Avenue at one point, but the Burbank Police Department blocked the traffic until attendees got back on the sidewalk.

No citations were issued at the rally.

FOX 11 reached out to Disney for a statement on the protest.